The Shaw Festival had its “media premiere” with The Magician’s Nephew, an adaptation for the stage by Michael O’Brien of C. S. Lewis’s novel for children. It is an interesting attempt to bring a book about dreams, magic and a journey to other worlds to the limited ambit of the stage and the production can only be described as a limited success.

The Magician’s Nephew, chronologically is the first part of The Chronicles of Narnia, a series of seven fantasy novels for children that were published between 1950 and 1956. The Magician’s Nephew was the sixth novel in order of publication and deals with the creation of the magical world of Narnia.

Kyle Blair as Aslan with the cast of The Magician’s Nephew. Photo by David Cooper
Judging by the uniform of the soldier, I thought the play takes place around the First World War. The program informs us that we are in London at the turn of the twentieth century. It takes place in a magical world in any event. We first meet the Dream Detective who detects dreams, of course. We then meet Digory (Travis Seetoo) and Polly (Vanessa Sears). They are wide-eyed youngsters who go to an abandoned house on their street and meet Uncle Andrew (Steven Sutcliffe), the magician. Digory wants to find a cure for his sick mother and the two of them set out on a journey that leads them to the magical world of Narnia.

The play has a large number of animals starting with the soldier Aslan (Kyle Blair) donning the mask of a lion. The members of the ensemble have white papier-mâché masks on their head that do not interfere with their speaking voices.

There is generous use of projection to create the world of magic. The basic physical ingredient of the staging is cardboard boxes which the cast put in various configurations. The projection of various colours cover the back of the stage and the sides thus create panoramic views. It is quite effective.

The cast spoke with an English accent which was mostly passable and we should just let it go at that. Sears and Seetoo maintained a good energy level and gave us the wide-eyed enthusiasm that is appropriate for the roles. 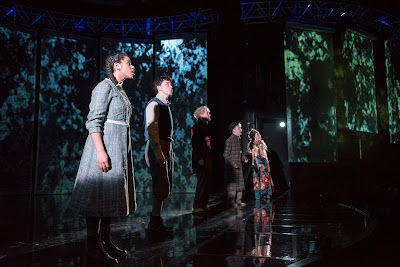 Vanessa Searsy, Travis Seetoo, Steven Sutcliffe, Deborah Hay and Michael Therriault. Photo by Emily Cooper
Digory and Polly travel through the magical world and they find Jadis, the Empress of Cham who killed all the people of her empire. She is the evil White Witch played by Deborah Hay.  Kyle Blair as the Lion is the creator of the world of Narnia.

Director Tim Carroll, Lighting Designer Kevin Lamotte and Projection Designer Cameron Davis attempt to create and capture a world beyond reality, with a flying animal, talking lions and horses, a White Witch and others. When one reads a book of fantasy one is driven by the author’s prose to create images that suit his or her imagination. In this production, we are denied much of the prose and driven by the imagination of the artistic team.

It worked reasonably well and but failed to capture my imagination. The theatre had some 350 pupils from about half a dozen schools. They were a rambunctious bunch before and as they were entering the auditorium but fell silent through most of the performance. There were moments when they appeared engaged but it was the exception rather than the rule.

The Magician’s Nephew is a children’s show without diminishing its attraction for adults. I found it a bit odd that Carroll would use it for the opening of the Festival. The matinee performance was billed a “media premiere” and the opening will be on May, 25. I have no idea what that is supposed to mean. Two openings? Really?
____________
The Magician’s Nephew by C. S. Lewis adapted for the stage by Michael O’Brien and directed by Tim Carroll had its media premiere on May 9th and will run in repertory until October 13, 2018 at the Festival Theatre, Niagara-on-the-Lake, Ontario. www.shawfest.com.