Girls Like That by Evan Placey is a play about bullying in school but the word is never mentioned. The setting is St. Helen’s School for Girls, in England, which accepts only twenty gifted and creative girls each year. They are admitted at age five and consider themselves special and they make a pact that they will be friends for life.

Scarlett is a fat girl whose naked picture is posted on the internet. Her friends for life turn on her and in the opening scene chant “slut, skank, whore, tart, harlot” and a number of other words that I do not understand but assume that they mean pretty much the same thing. 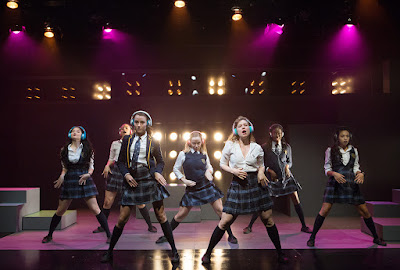 The cast of Girls Like That. Photo: Photo: Cylla von Tiedemann
The attack on Scarlett by the girls attains a viciousness that should give pause to anyone with a scintilla of humanity. The girls appear to have none as they describe Scarlett’s body with sadistic glee and find fault with her appearance which assures them of their own superiority.

The play can be performed by as many as 20 actors or fewer. Director Esther Jun has chosen to do it with seven actors and they are enough. Except for Scarlett, the girls have no names and the lines of the script are distributed among them as the director chooses. They often speak in unison and perform a number of dance routines to rock music and are very good at it.

Ensemble acting dominates the play and the girls address the audience frequently, describe conversations and often do not follow the rules of ordinary dialogue. They reminded me of the avenging Furies in Greek drama and myth who pursued wrong doers until they drive them mad. The goddess Athena transformed them into Erynies (the kindly ones) but she is nowhere to be found in Girls Like That. The girls we meet at age five are the same at age 45.

Scarlett, the victim of the Furies, is the exception. In the end she takes her own revenge on her tormentors. In a fine speech she describes what humanity, maturity and success mean. I will not give more details about it. The issue I have with the play is that there is nothing in it beyond the vicious cruelty of the girls to prepare us for the revenge. 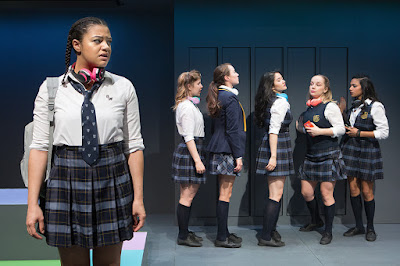 Shakura Dickson, Tess Benger, Rachel VanDuzer, Cynthia Jimenez-Hicks, Lucy Hill and
Nadine Bhabha. Photo: Cylla von Tiedemann
The characters, aside from Scarlett, are described as Girls and they are played by Tess Banger, Nadine Bhabha, Shakura Dickson, Allison Edwards-Crewe, Lucy Hill, Cynthia Jimmenez-Hicks and Rachel VanDuzer. They do fine work as chanting furies, screaming students, dancers and representatives of one of the worst features of our society – bullying.

Director Esther Jun had her work cut out to coordinate the numerous moves, scene changes and handling of the dialogue demanded by the play and to keep a fairly frenetic pace without the actors falling over each other. Well done but that did not improve the play which makes its point about bullies but fails to develop the characters or give some depth to the issue.
______

Girls Like That by Evan Placey opened on April 25 and will play until May 27, 2018 at the Tarragon Theatre, 30 Bridgman Ave. Toronto, Ontario.  www.tarragontheatre.com