After the Blackout is a startling play written and directed by Judith Thompson. Each of the six characters in it is suffering from one of the following: brain-damage, drug addiction, leg amputation, deafness (2 of them), hands and arms amputation and blindness. But the actors are not representing people with these conditions. The actors have exactly the same or at least similar disabilities as the characters that they play.

Six people from disparate backgrounds find themselves in a cottage in northern Ontario. The star-lit sky looks unbelievably beautiful and we discover the stories of these six. Roxy (Mary Beth Rubens) was a successful actor, a star in fact, until she suffered a serious brain injury that disabled her for life. In the first scene she meets a young man whom she met on line. He is young enough to be her son and she cannot understand what he is after. 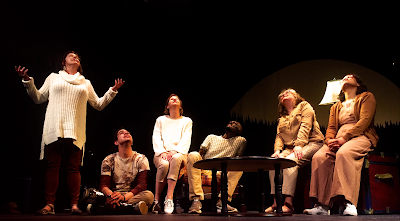 After the Blackout Ensemble. Photo by Elias Campbell.

Zola (Tamyka Bullen) is deaf and can only communicate in sign language. Her friend Beatrix (Catherine Joell MacKinnon) is also deaf but she has learned to read lips and Zola considers her a traitor.Khari (Prince Amponsah) has had his hands and arms amputated. He is a wise man and a professor of writing. His wife Jamie (Melanie Lepp) is blind from juvenile diabetes.

I give all these details because I feel it is important to know under what conditions these actors are performing. Neither the actors nor the characters consider themselves disabled in the conventional sense. All of them are intelligent and accomplished with the possible exception of Dash who spends time in jail for breaking and entering and sexual assault. But he too is a poet. All of them have problems “after the blackout” that brought their current condition but all of them surpass them. Maybe. Maybe not. See the play. 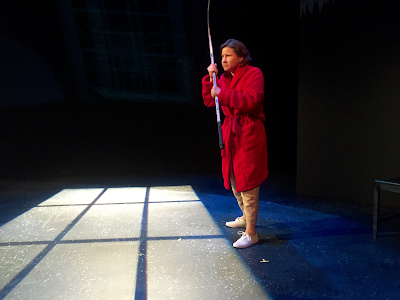 Melanie Lepp. Photo by Elias Campbell.
The play is episodic as the characters are allowed to tell their story. There is unevenness in the writing. Near the end Thompson goes off the rails when she starts preaching about racism. The end is overwritten and takes too long to wrap up and unravel the possible conclusions to the stories.

The set design by Sue Lepage in the small Tank House Theatre features scenes of cottage country with a tree line of evergreens, a star-lit sky and scenes at a cottage and elsewhere with a minimum of props.

The play needs some dramaturgy but the performance and the view of the actors will stay with you for a long time. This is extraordinary theatre. Go see it.
_________

After the Blackout by Judith Thompson in a production by Rare Theatre Company continues until May 26, 2018 at the Young Centre for the Performing Arts, 55 Tank House Lane, Toronto, Ontario. www.soulpepper.ca,   www.raretheatre.org/