Stage Kiss by Sarah Ruhl is a romantic comedy that combines farce with the old device of asking the question of what is reality and illusion. Some of the farcical scenes are very funny, there is some unnecessary overacting but it is decent light entertainment. It is the season’s second media premiere at the Shaw Festival.

A sexually magnetic Fiona Byrne plays She, an actress who has done very little work for the past decade. She was in love with He (Martin Happer), a down and out actor who is struggling to survive. She has a Husband (Sanjay Talwar) who is good at math and can figure out how many times his wife and He kissed during a four-week run of the play they are doing. 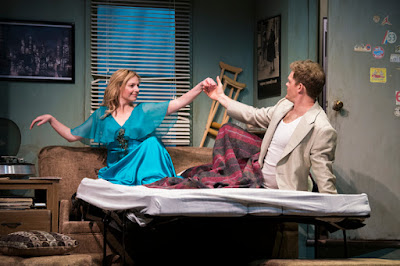 Fiona Byrne as She and Martin Happer as He in Stage Kiss. Photo by Emily Cooper
He and She (there is no doubt a reason why Ruhl does not give them names, but it escapes me) are cast in a play directed by Neil Barclay (again no name, just Director) and they meet during rehearsals.

The play that they are rehearsing under the hapless direction of the Director is a mirror image of the real life of the characters except that the characters in the play are rich and successful. The old passion between He and She is re-ignited in both situations, the husband is compliant and the show goes on.

As you may suspect there is a lot of kissing on stage and off between He and She. When He fails to show up for rehearsal, his place is taken by Kevin, the understudy played by Jeff Meadows. Kevin has to kiss Ada, She’s part in the play, but he has a problem kissing women. He is not straight, he tells us. The real director of Stage Kiss, Anita Rochon, has him approach the lips of Ada (the character She is playing) with his mouth wide open several times as if he about to eat her. That may be funny the first time but it does not bear repeating. A director no matter how inept (I am referring to Barclay’s part) or an experienced director like Rochon) would have told him to close his mouth and grimace after the labial contact or do some other funny business. 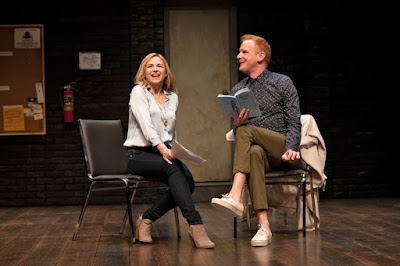 Fiona Byrne and Jeff Meadows in Stage Kiss. Photo: Emily Cooper
There are some very funny scenes involving back-stage flaps but once you get the main outline of the two parallel plots, there is not much left to say. The issue of what is illusion (acting) and what is reality (the real lives of the characters) is interesting but not exactly compelling.

Byrne is superb in a fast-paced comedy and she leads the pace of the play. Happer is a passionate lover who is caught up in some funny situations and does a fine job. Barclay is an incompetent director who gets laughs for being a failure. Talwar is the cuckolded husband who acts nobly in the play-within-a-play. His wife has a degenerative disease and has only thirty days to live. There is some surprisinng information about that but I won’t spoil it for you.

The sets by Gillian Gallow consist of an empty theatre, an actual set for the performance of a play and He’s messy apartment. They are fine.

Stage Kiss  by Sarah Ruhl had its media premiere on May 9 and will have its opening on May 25, 2018 and will run  in repertory until September 1, 2018 at the Royal George Theatre, Niagara-on-the-Lake, Ontario. www.shawfest.com.