The Canadian Opera Company’s production of Anna Bolena provides an opportunity to see and hear a magnificent soprano at the height of her powers singing a great role. The soprano is Sondra Radvanovsky and she sings the title role of Donizetti’s bel canto wonder directed by Stephen Lawless.

Anna Bolena (Anne Boleyn) is the hapless wife of King Henry VIII who has reached her best before date in her husband’s eye and he wants to discard her. He has already found a replacement in Jane Seymour who happens to be Anna’s lady-in-waiting and he has recalled to court Lord Percy, Anna’s former betrothed, in the hopes that his return will ignite their former relationship and give grounds for the disposal of Anna. 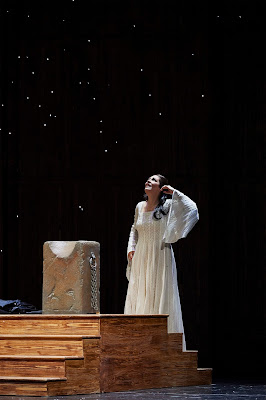 Sondra Radvanovsky as Anna Bolena. Photo: Michael Cooper
Radvanovsky gave a dramatic, passionate and vocally dazzling performance that simply brought the house down. We see her as a woman spurned, afraid, betrayed and driven to madness. In the end she faces death with grace and beauty.

Henry VIII is sung by bass-baritone Christian van Horn as a young and slim king who may be in love but we suspect that he is simply a dictator who wants his way and there is almost nothing to stop him from getting it. Van Horn reaches exceptional vocal sonority and acting to give us an effective if disgusting character.

The other tragic figure in the opera is Jane Seymour sung by mezzo-soprano Keri Alkema. She owes a duty to the Queen but is drawn by Henry. In the end she regrets her choice. A finely modulated performance.

Mezzo Allyson McHardy sings the pants role of Smeton, the pathetic court musician who is secretly in love with Anna. He lies about being Anna’s lover in order to save her but the “confession” has the opposite effect. A fine performance by McHardy.

Tenor Bruce Sledge sings Riccardo Percy who still loves the unhappy Anna but she resists him. Sledge’s agile and splendid voice give us a very good performance.

Lawless and Set Designer Benoit Dugardyn set the opera in London’s Globe Theatre which was built more than fifty years after Anne was executed. The set consists of semicircular balconies that surround the main stage. The chorus is found there much of the time except when it is essential for them to be on the ground floor. Many of the characters are also seen on one of the balconies. Unfortunately, the unadorned panels that are moved around and the balconies give the impression that the opera takes place in a barn rather than a palace.

We do get to see a wooden throne that lacks the ostentatious red velvet that one associates with regal seats. There are few props aside from that but we do get an impressive bed where Percy compromises Anne even though she does not allow him to do anything improper. 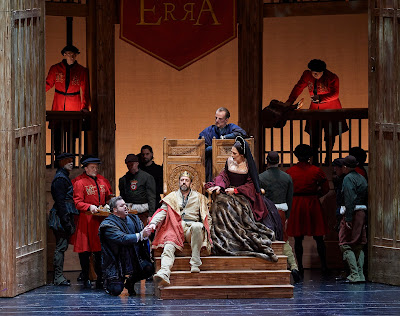 There a number of infelicities in relation to positioning of characters where making use of the whole stage takes precedence over people confronting each other. The final scene where Anna is beheaded with an axe is understated and a good opportunity for a dramatic finale was lost.

All of which amount to legitimate observations but they do nothing to take away from the singing and orchestra playing that are second to none and make this Anna Bolena an extraordinary production.

And, as a sideline, it may be worth mentioning that the Globe Theatre went up in flames in 1613 during a performance of Shakespeare’s Henty VIII. Perhaps it was a posthumous expression of God’s distant vengeance on the memory of the cruel king.
______________

Anna Bolena by Gaetano Donizetti on a libretto by Felice Romani continues until May 26, 2018 on various dates at the Four Seasons Centre for the Performing Arts, 145 Queen St. West Toronto, Ont. www.coc.ca