August Wilson wrote some powerful and perceptive plays about the condition of blacks in America. When he turned the spotlight on them, it became like a scalpel that dissected the inner being of people who were monstrously mistreated for centuries in what surely amounts one of the greatest crimes against humanity.

Ma Rainey’s Black Bottom is set in a recording studio in Chicago in the 1920’s and tells the story of blues singer Ma Rainey and the band that accompanies her when  she sings. The four musicians tell most of the story but the powerful and temperamental Ma Rainey dominates the scene when she is on stage. 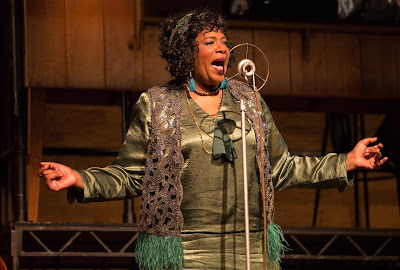 Alana Bridgewater. Photo by Cylla von Tiedemann
Soulpepper’s production, directed by Mumbi Tindyebwa Otu, has an outstanding cast that deliver riveting performances and provide an unforgettable night at the theatre.

Canadian Alana Bridgewater plays Ma Rainey, the temperamental, domineering blues singer who knows only one way – her own. She travels with her lesbian lover Dussie Mae (Virgilia Griffith) and no one can gainsay her. That is the performance that Bridgewater gives. Her voice is not as powerful as her acting but she makes an impressive character nevertheless.

Wilson draws the four band members with distinctive brushes and they represent what it meant to be black in America in the 1920’s. There are only two whites in the play who are not overtly racist but they consider blacks as sources of money and do not socialize with them at all.

The trumpet player Levee who is a composer as well and wants to start his own band gives most vocal expression to their plight. Lovell Adams-Gray gives a stellar performance as a young musician who is angry with the world and angry with himself. He rages against people and against God until the final dramatic scene of the play. If you have seen the play before, you don’t need to be told. If you have not, I will not spoil it for you.

Cutler plays the trombone and is the leader of the band. He tries to maintain peace among the musicians and he is a man who knows that Ma Rainey is the boss. Lindsay Owen Pierre gives us a decent and sympathetic man who just wants to get the job done.

Slow Drag (Neville Edwards) is bass player and a professional musician. He got his name by dancing slowly with a woman for hours in order to win some money in a contest. Again a sympathetic portrayal. 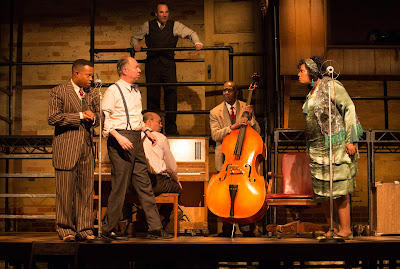 Marcel Stewart, Diego Matamoros, Alex Poch-Goldin, Beau Dixon, Neville Edwards, and
Alana Bridgewater. Photo by Cylla von Tiedemann.
Toledo (Beau Dixon) is the piano player and intellectual of the band. He speaks knowledgably and eloquently about the plight of black Americans. A fine performance by Dixon.

Sturdyvant and Irvin are the only whites in the play. They are not overtly racist but they are fundamentally racist. Sturdyvant (Diego Matamoros) owns the recording studio and his sole interest is making money. He looks at Ma Rainey and the band players simply as tools for making money. If they are people as well, that is just a fact that he need not concern himself about.

Alex Poch-Goldin as Ma Rainey’s agent is an oily figure who is forced to please people, including the blacks, because he can make money. His relationship with blacks never moves beyond strictly business.

Mumbi Tindyebwa Otu directs superbly. We get a glimpse of a recording session in Chicago a long time ago. But we also get a picture of American racism and gross injustice that has been around for centuries with few signs of fundamental change on the horizon.

Ma Rainey’s Black Bottom  by August Wilson opened on May 10 and will run until June 2, 2018 at the Young Centre for the Performing Arts, 55 Tank House Lane, Toronto, Ontario. www.soulpepper.ca