The Shaw Festival has found a highly pleasant pair of one-act plays by Bernard Shaw and given them a delightful production. The plays are The Man of Destiny and How He Lied to Her Husband. The first is the more substantial play but not enough to fill an evening at the theatre. Shaw wrote How He Lied in 1905 while on holiday in Scotland during four days of continuous rain.

The title given to the comedy double-bill is ironic because in both plays an intelligent, strong woman dominates men and both plays are concerned with the honour of a woman. 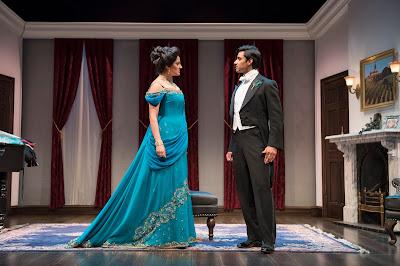 Krystal Kiran and Shawn Ahmed in How He Lied to Her Husband. Photo by Emily Cooper.
Henry (Shawn Ahmed), dressed in tails, arrives at the well-appointed drawing room of Aurora. He is a handsome eighteen year old poet who is full of so much passion and ardour that it simply overflows. The object of his passion is the mature and beautiful Aurora (Kristal Kiran). He wants to take her to the theatre and then to his place. But there is a problem.

Aurora is married to Teddy (David Adams) but that is not the problem. Teddy has found the poems that Henry has written to Aurora and that is the problem. Henry says he didn’t. Teddy says he did. Tempers flares, violence is imminent. A lady’s honour is at stake. OK. Change tactics. Yes he did write the letters. Disbelief, distress, tempers boil over. During all of this Aurora, the intelligent, strong woman looks at the two men with an insouciant smile and serene demeanor.

We watch with pleasure the fine performances by Adams, Ahmed and Kiran under the fine directorial hand of Philip Akin on the beautiful set by Steve Lucas. How He Lied to Her Husband is like a Greek loukoumada, crusty dough filled with heavenly honey. Just delightful.

The Man of Destiny is about the youthful Napoleon who in 1796 is in an inn in Italy. A hapless Lieutenant (Andrew Laurie) arrives supposedly bringing dispatches only to blubber out that the dispatches and his horse have been swindled from him by a charming young man. He is really angry.

Napoleon (Kelly Wong) knows that he has met a woman of strong character and high intelligence and it takes some effort to get the dispatches. But the Lady is not interested in the dispatches. She wants to save the honour of a lady and that is none other than Josephine, the wife of Napoleon. There is a dispatch suggesting that Josephine has been unfaithful. 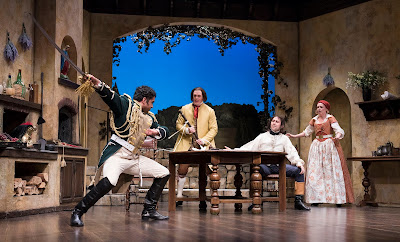 Andrew Lawrie, Martin Happer, Kelly Wong and Fiona Byrne in The Man of Destiny.
Photo by Emily Cooper.
The entertainment comes from the poor lieutenant who is quite amusing in the hands of Lawrie and Martin Happer as the inn owner Giuseppe who sports a heavy Italian accent is quite funny. Wong is a strong Napoleon who is no fool but he knows a scandal is better avoided that provoked.

Fiona Byrne gives the best performance as the Strange Lady who combines mental dexterity and female wiles to keep the men, even Napoleon at bay and get her way.

Once again Philip Akin deserves kudos for his directing of a fine cast and achieving commendable results.

The set designed by Steve Lucas and representing the inn is bright and pleasant.

Shaw could not resist descending into verbosity but in this one-acter it is limited and we enjoy seeing two marvelous productions of rarely seen plays.
___________
Of Marriage and Men by Bernard Shaw had its media premiere on May 23 and will continue in repertory until October 2, 2018 at the Royal George Theatre, Niagara-on-the-Lake, Ontario. www.shawfest.com.