Director Rufus Norris sets the current production of Macbeth now showing on the National Theatre’s Olivier stage in a modern country in the midst of civil war. There is smoke and armed fighting in the dark opening scene. There is a large ramp on a background of a black, tattered, plastic curtain (they look like floor-to-ceiling garbage bags) and there is no doubt that this is a battlefield. In fact the entire action of the play takes place on or near the battlefield. 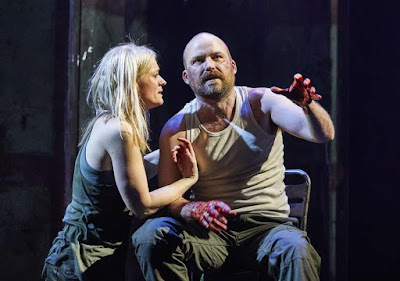 Anne-Marie Duff and Rory Kinnear. Photo: Tristram Kenton
Macbeth’s castle is no more than a shed and the banquet scene takes place in what looks like a barracks make-shift cafeteria where Macbeth and Lady Macbeth lay out the cutlery. The Olivier’s large revolving stage serves the production well making quick scene changes feasible.

The production has a strong cast led by Rory Kinnear as an ambitious but uncertain Macbeth and Anne-Marie Duff as a blonde, two-faced and manipulative Lady Macbeth. The idea of assassinating King Duncan (Stephen Boxer) springs in her mind with lightning speed when she hears of her husband’s promotion and the possibilities of greater achievement. After greeting Duncan with unctuous politeness on his arrival, she cuts off his head after he is murdered. Superb performances by Kinnear and Duff.

Boxer as Duncan is a gentleman in a red suit and stands apart from the others who wear mostly military attire. Macbeth wears the same red suit after he murders Duncan.

Kevin Harvey’s Banquo is decent and the rest of the cast work well in the shadow of Kinnear and Duff.

Norris adds a number of touches that make the production interesting. In the banquet scene Banquo’s ghost appears outside the window of the cafeteria while the other guests are sitting with their backs to it. That makes it realistic and less forced but also less imaginative.

The ghost of Banquo dominates Macbeth’s life after he is murdered. He appears several more times after the banquet scene including in the last scene of the play.  Banquo is murdered by a nameless Murderer played by a very recognizable Alana Ramsey. In the final scene, in a moment of poetic justice, the Murderer is killed. Effective staging and directing by Norris.

The modern costumes, the civil war and setting the play largely in a battlefield do give it a different feel. The main weapon made visible from the first scene is the machete which is immediately reminiscent of the civil war in Rwanda. There is no castle in which Macbeth welcomes the king in ceremonial fashion wearing impressive royal attire. If one accepts that Macbeth takes place in some vague modern country during a civil war and finds that as a sufficient focus then the production is fine. If you are looking for a more focused view of the play than a vague battlefield, you will demand more than you are getting.

Macbeth by William Shakespeare continues at the Olivier Theatre, National Theatre, South Bank, London, England. It will be broadcast live from the National Theatre on September 6, 2018. http://www.nationaltheatre.org.uk/