Twelfth Night is playing at Shakespeare’s Globe Theatre in London this summer. It is directed by Emma Rice who is also the Artistic Director of the theatre. Ms Rice should have had the curtesy to warn people that what is on stage is not Shakespeare’s Twelfth Night but an adaptation. Carl Grose is listed in the credits for “additional text and lyrics” and there are numerous cuts in the text, a great deal of music and dancing has been added and Shakespeare’s play has been dumbed down for a teenage audience. The warning should have concluded with the advice that Shakespeare lovers or people who respect the text should stay away.

I went to see Shakespeare’s play and not an adaptation for teenagers. 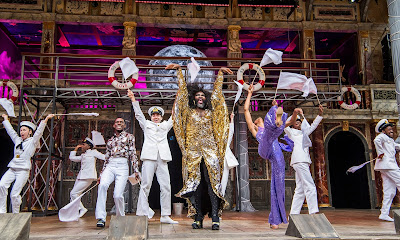 Le Gateau Chocolat, centre, as Feste and the cast on board in Twelfth Night. Photograph: Tristram Kenton.
The play opens on board a ship (appropriate) and a man in drag in a sequin dress with a grotesque wig starts singing. He has an impressive bass voice but what we get is about ten minutes of unpleasant noise. After the shipwreck near an island in northern Scotland in 1979 (we are told this in the programme) Viola asks “what country, friends, is this?” and everybody on stage answers “Illyria.” Are these the survivors of the wreck? Who are they? One person takes over the dialogue and tells her that Illyria is governed by Orsino and sure enough Orsino walks across the stage dancing and singing “If music be the food of love.” He mentions Olivia and she saunters across the stage. Welcome to Sesame Street.

The man in drag turns out to be Feste, the clown (Le Gateau Chocolat) who will get rid of the wig but keep the sequin dress. He will do a lot of singing and the rest of the cast will join in frequently. There is a band and it is used to the point where I wanted to scream “SHUT UP” especially when they played while characters were speaking.

Scene changes were effected with dancing when the whole cast came on stage, did a few steps and ran off. This was ridiculous, unnecessary and had no other effect than to keep the teenagers amused.

If Rice did not try so hard for the ridiculous, it could have been a good production. Anita-Joy Uwajeh made a spry and attractive Viola/Cesario as did John Pfumojena as her brother Sebastian. Annette McLaughlin was fine as Olivia but she looks a bit past her bloom of youth for the part. Joshua Lackey’s Orsino is a shallow, dancing and singing playboy and not the moping, love-sick duke. 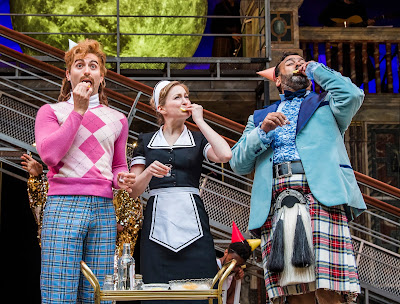 Marc Antolin (Sir Andrew Aguecheek), Carly Bawden (Maria) and Tony Jayawardena (Sir Toby Belch).
Photograph: Tristram Kenton
Katy Owen made an interesting Malvolio. She is a petite woman with an elastic body who can kick her heels above her head. She is a very feisty Malvolio and in a normal production would have been superb.

Marc Antolin’s Sir Andrew is played like the old caricature of an effeminate man in a pink sweater and Tony Jayawardena’s golfing Sir Toby gets the laughs when they play Shakespeare.

In other words, Shakespeare managed to break through despite the countless alterations, additions, subtractions, dumbing down and garbage brought in by Rice and Grose. By the end of the performance I was so infuriated that the only word I could come with when asked my opinion was excrement.
__________