Mitridate, re di Ponto is an early opera seria by Mozart that is beautifully sung, marvelously directed and superbly played at the Royal Opera House, Covent Garden. These succinct praises are not frequently or obviously associated with this opera, but more about that later.

Opera seria, of course, means arias to express emotions and recitatives to advance the plot. There is no chorus and almost no ensemble singing except for a couple of duets. For example, when Sirafe and Aspasia sing the duet “Se viver non degg’io” (If I cannot live), they face the audience, walk around the stage and never really relate to each other. 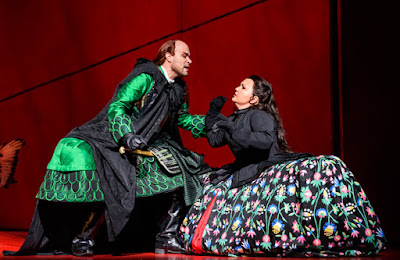 Bejun Mehta and Albina Shagimuratova in Mitridate; re di Ponto at Royal Opera House, London
The genre was dumped in the latter part of the 18th century but there is no reason to put our nose up because style and substance changed. Mitridate is enjoyable on its own regardless of any shortcomings or prospective changes in style.  In other words, look upon the donut and not upon the hole.

A smidgeon of plot. King Mitridate has two sons who don’t get along; to wit Farnace wants the king’s job and his fiancée Aspasia and Sirafe who also wants Aspasia. Meanwhile Mitridate who is supposed to be dead but is not, imports Princess Ismene as a wife for Farnace. Aspasia loves Sirafe, Farnace does not want Ismene and, well, you get the idea. Love, honour and treachery in opera seria are analogous to riding a bicycle: once you learn it you never forget it but you can change as many bicycles as you want.

The performances are vocally outstanding. American tenor Michael Spyres takes on the name role with aplomb. He has a light tenor voice that is flexible and reaches the high notes with ease. Many of the arias are done at a brisk pace but there some very moving moments. Mitridate has some nasty characteristics but near the end he becomes noble and forgiving and Spyres rises to the occasion with beautiful emotional cadences. This is a five-star Mitridate.

Soprano Albina Shagimuratova with her sumptuous voice gives us an Aspasia of vocal splendour. When she sings the recitative “Ah ben ne fui presage” (Ah my foreboding was justified) and the cavatina “Pallid' ombre" (Pale shadows) she reaches an expressive and lyrical majesty that clearly presages “Dove sono.”

Soprano Lucy Crowe sang the Princess Ismene. She is given to Mitridate as a slave and she tended to tilt her head to the side and I thought it was an indication of humility and servitude. Her singing and portrayal is highly accomplished.

Georgian Soprano Salome Jicia and American countertenor Bejun Mehta sang the sons Sirafe and Farnace, respectively. The boys go through love and hate, treachery and reconciliation without hesitation. That’s their operatic problem as characters but Jicia and Mehta display only vocal flexibility and finesse in their performances.

This production first surfaced in 1991 which was also the first time Mitridate was seen at the Royal Opera House. It is an imaginative and remarkable staging directed by Graham Vick. It never feels static and you are engaged in the plot however convoluted it may appear. 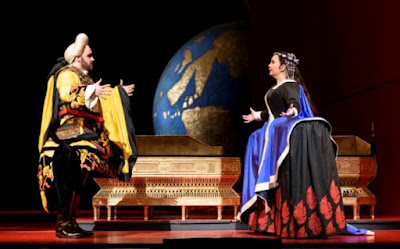 Michael Spyres as Mitridate and Albina Shagimuratova as Aspasia in Mitridate, re di Ponto
Photo ROH© Bill Cooper
Designer Paul Brown uses stark red panels that can be moved around and a red floor. It is an arresting image that works well. The costumes are another story. They are colourful, conspicuous and eye-catching. But, some of those costumes looked like portable scaffolding for drying clothes. After you see them a couple of times and you giggle, you just ignore them.

The orchestra of the Royal Opera House was conducted by Christophe Rousset and played with finesse.

When Mozart composed Mitridate, he already had four operas under his belt and eighty-two other compositions. You can hardly call him the new kid on the block until you realize that he was fourteen years old at the time. The opera premiered at the Teatro Regio Ducale in Milan in 1770 conducted by Mozart. After that it was ignored for a couple of centuries. It was discovered late in the 20th century and has received a good number of productions and recordings. Now we can sit back and feel superior to…whatever. Or just enjoy a fine opera in a superb production.
_____________