The number of crimes against humanity in the twentieth century alone is grotesquely long. The holocausts committed by the Turks, the Russians, the Chinese and the Nazis are only a part of the list. What the whites did to the blacks in South Africa with the policy of apartheid, I suggest ranks as a major crime against humanity.

Playwrights Athol Fugard, John Kani, and Winston Ntshona dramatized the plight of blacks during apartheid and their 1973 play The Island is a brilliant evocation of the era. Two men are in jail and their crime is best described as being black.The island of the title is not named but there is no doubt that it is Robben Island, where Nelson Mandela was held for twenty-seven years. 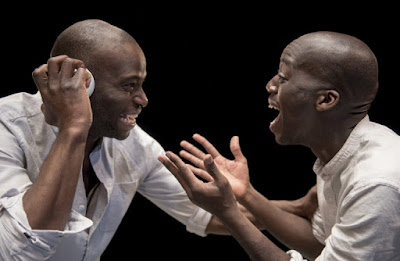 The production under review was played in the tiny Southwark Playhouse, in the London suburb of Southwark. The playhouse is a theatre-in-the-round and probably holds fewer than 150 people.

The performance opens with two cellmates miming the loading of wheelbarrows in a quarry. They are working as hard as humanly possible as they fill and then empty their wheelbarrows. Under the hot lights of the Playhouse, they begin to perspire and show signs of real fatigue. The mime lasts for some fifteen minutes by which time perspiration drips profusely from their faces and they appear exhausted. In the end, they are shackled to each other on their wrists and ankles and hobble to their cell in excruciating pain.

The performance continues on the raised stage. The men are Winston (Edward Dede) and John (Mark Springer) who decide to stage Sophocles’ Antigone for the other prisoners. The staging of the Greek tragedy is apparently based on a real incident in which Nelson Mandela took part and ironically played the role of the dictatorial Creon.

John wants Winston to play Antigone but when he sees the straw that will be his wig and the balls on a string that will represent her breasts, he balks. They go through a few lines of Sophocles’ play and then find out that John’s sentence has been reduced from ten years to three months. This creates some tension but the two men are reconciled to their fate and are able to perform their version of Antigone.

Winston as Antigone pleads guilty to the charge of disobeying the law against giving burial rites to her brother because the same law considers him a traitor. He/she argues that there is a higher law than the man-made one and she had an obligation to honour her brother. Creon as a dictator argues that laws are made to be obeyed and must be obeyed without any reference to external considerations such as higher laws. The defendants at the Nuremberg trials had pretty much the same argument – they were just obeying the law.

Dede and Springer give outstanding performances that were emotionally and physically taxing. The lights above the stage produced so much heat, you felt you were in the quarry with the prisoners on a scorching hot day. The heat was so intense that several people left and one woman fainted and was carried out of the theatre.

Director John Terry and the two actors deserve a five-star rating and a standing ovation.
_____


The Island by Athol Fugard, John Kani, and Winston Ntshona  in a Production by The Theatre Chipping Norton and The Dukes Lancaster Theatre Present played until June 24, 2017 at the Southwark Playhouse, 77-85 Newington Causeway, London SE1 6BD. http://southwarkplayhouse.co.uk/
Posted by James Karas at 4:52 PM