The Greeks had it right. After a trilogy of tragic plays in Ancient Athens, people needed a freewheeling comedy, a burlesque, something really light. The Royal Shakespeare Company has done something  similar  this year in Stratford-upon-Avon. Beside the head chopping, murders, mutilations, assassinations and stabbing in plays like Titus Andronicus, Julius Caesar and Antony and Cleopatra, they provide something strictly for laughs. And it is based on Roman comedy which, as the whole world knows, was based on Greek comedy! 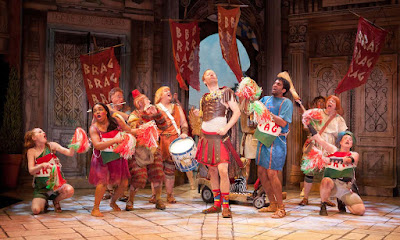 Centre: Felix Hayes as General Braggadocio and company. Photo: Pete Le May © RSC
The play is Vice Versa by Phil Porter and it is a wild comedy based on (make that pilfered shamelessly) from the plays of Plautus. You may not have seen too many of his plays on stage which is understandable because they are almost never produced. But you have some idea if you have seen A Funny Thing Happened on the Way to the Forum.
Let’s start with the full title: Vice Versa (or The Decline and Fall of General Braggadocio at the Hands of his Canny Servant Dexter & Terence the Monkey). Is that clear?

General Braggadocio is of course the braggart soldier, a stock character in comedy, who is in love with himself and thinks the whole world shares his feelings. In Vice Versa we have Felix Hayes, oily hair slicked down and ready to brag. Along with the jokes, bad puns, singing, anachronistic references and riotous tomfoolery we need a plot.

But first the characters, and pay attention to the names: Braggadocio has three servants. Dexter (the irrepressible Sophia Momvete),  Feclus (Steven Kynman) and Omnivorous (Byron Mondahl). We also have Terence the monkey (Jon Trenchard). We need lovers and have Valentin (Geoffrey Lumb) and the delectable Voluptia (Ellie Beaven).We have a neighbour in Philoproximus (Nicholas Day) whose servant is Impetus (Laura Kirman) and frequent Climax (Kim Hartman) and guess her profession.

This is a hyperkinetic group that has a single aim and that is to make us laugh. They do. 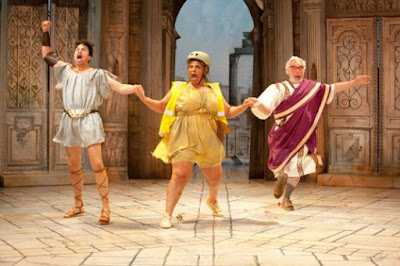 Geoffrey Lamb, Sophia Nomvete and Nicholas Day.  Photo: Pete Le May © RSC
Oh, yes, the plot. The General has abducted Voluptia who loves Valentin, who lives next door, who sees Voluptia via the attic skylight, whom Dexter will rescue from the General so that love will triumph because that’s what happens in Roman (that is Greek) comedy, so there. That’s the plot which is to say that Trump is a nice, honest chap, who does not grope, or cheat or lie but will build a wall and make America great again. And the last line is in the play.

The play uses earthy language which is code to some deliciously raunchy profanities, enchanting references to bodily functions, delectable insults and an atmosphere of riotous irreverence, energy and song.

Janice Honeyman directs the comic extravagance and if you happened to see something like Salome or a Shakespearean heavy-duty tragedy you will understand and appreciate why the Greeks finished the day with a comedy that mocked and laughed at everything and booze, sex and phallic objects were favorite features and fixtures.
_____