Rotterdam is a play based on a simple premise and as you watch it you wonder how the author will be able to sustain our interest for more than two hours. Jon Brittain does more than that in this funny, moving, witty and intelligent piece of work.

Alice (Alice McCarthy) and Fiona (Anna Martine Freeman) are gay, living in Rotterdam and deeply in love. Alice has not told her parents yet that she is gay but that is not the real problem. Fiona tells Alice that she is transgender – she is a man in a woman’s body and she wants to change that. Fiona eloquently explains to Alice that she does not want to become a man. She wants to stop pretending that she is a woman. 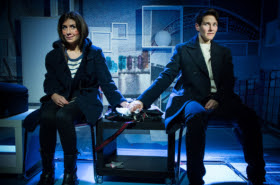 Alice McCarthy and Anna Martine Freeman in Rotterdam/. Photo by Hunter Canning
Josh (Ed Eales-White) is Fiona’s brother who had a relationship with Alice until she realized that she is gay and dropped him for Fiona. Alice works with a spirited Dutch girl, Lelami (Ellie Morris) who is gay and smokes pot. These are the four people who will deal with the serious issues of the play and make us laugh.


McCarthy does a superb job as Alice, the shy, apologetic girl who realized at an early age that she preferred women to men. The only relationships she has had in her life were the failed one with Josh and the successful one with Fiona. She still cannot bring herself to telling her parents and how to deal with the desire of Fiona to stop pretending she is a woman. These themes will dominate the play. The issue is simple: Alice prefers women. Fiona insists that she is a man.

Freeman’s Fiona is smart, sympathetic, tolerant and loving towards Alice but she fails to foresee the consequences of the physical changes she must make to assert he manhood. A moving portrayal of conflict and despair.

Josh is the sympathetic brother with a sense of humour and some common sense. He is true foil and sounding board for the other characters. Morris has to affect what I take to be a Ditch accent. Lelani is a bit goofy, dresses outlandishly and is very expressive and uses her hands and the rest of her body when she speaks. Well done. 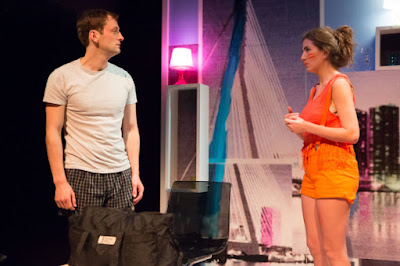 The set by Ellan Parry consists of a room indifferently decorated that serves as an apartment, a bar, a waiting room etc. The scene changes are done by moving pieces of furniture around. Too much is made of this and I think it could be effected more simply and without so much fuss.  And we don’t need that many lighting changes. A simple poster can indicate a change of locale, but so be it.

The real issue with the scene changes is the loud and really irritating rock music that is played. We hear a ton of it when we enter the theatre before the performance starts and we are exposed to it a few thousand times during the performance. Turn the damn noise off.

The simple play with a big issue and young people experiencing highly stressful situations is not easy to direct and maintain the pace and the emotional wavelength. Director Donnacadh O’Brian does excellent work.