Jean-François Sivadier’s production of Don Giovanni for the Aix-en-Provence Festival may be described as Apostolic. There are a number of names that may be apt but the last scene which is fresh in my mind suggested that word.

When the flames engulf Don Giovanni (which in this production they do not) the other characters show up and celebrate the end of the life of an evildoer and things return to normal. In Sivadier’s production, Don Giovanni is centre-stage, almost naked with long blond hair. Leporello grabs him from behind at one point and he spreads out his arms. This is Christ on the cross. 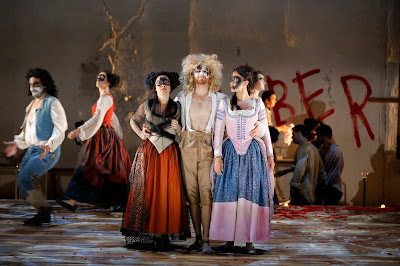 He stands in the middle of a bright spotlight. In an earlier scene the word LIBERTA appeared on the back wall of the set, in large red letters except for the letter “t” which is in the form of a cross. In the final scene, Don Giovanni’s jacket is hung on that cross.

After standing still for a few minutes in the bright spotlight, he gets a rush of energy and does some athletic movements and remains on the stage. He is not engulfed by anything of course and I wondered if the bright spotlight and the other indicia are supposed to tell us that Don Giovanni was not only not punished but was transfigured.

The Christ figure is preceded by Don Giovanni as a circus clown with a ridiculous blond wig. He looks pretty unattractive most of the time and I thought this man may not be able to hire an hourly sex worker, let alone cause women to become enamored and indeed obsessed with him past all understanding.

This is a new production of the opera and Sivadier wants to put his stamp on it. In most respect the attempt misfires and the result is a largely unpleasant performance.

A few more points may have to suffice. The peasants are very happy that Masetto and Zerlina are getting married and they are wearing traditional country clothing. But they decide to boogie. Good grief. The costumes and the sets are of no help in giving us the age when the opera takes place unless it is at the time of Christ. That neither helps nor is it convincing but the opera  does take place at one time or another. 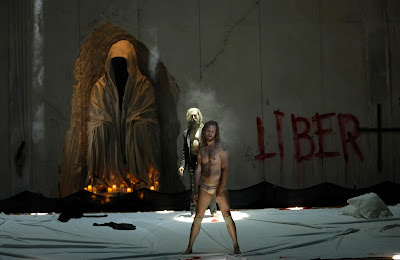 Sivadier seems to think that singers should address the audience regardless of the suggestions of the music and the libretto. When Don Giovanni sings “Là ci darem la mano’ to the peasant Zerlina, he is trying to seduce her. Sivadier positions them across the stage as if they are addressing the audience. This happens many times and if there is a reason for it, it escaped me completely.

The set itself is incomprehensible to me. A large square platform, tilted towards the audience dominates the set. There are some curtains that are raised and lowered and several gold banners for Leporello and Don Giovanni to hide behind when they are horsing around with the ladies. There are some colourful lights as well.

People appear on stage, walk around and disappear. I did not get what they were supposed to represent or what Sivadier was trying to tell us.

Sly as Don Giovanni was not convincing as a lover, or a seducer, or Christ figure. He may have done well as a clown but that was the last thing I wanted to see. Among these shenanigans he managed to sing well.

Isabel Leonard as Donna Elvira starts out by calling Don Giovanni a traitor, a liar and a villain. Those accusations need fury in her voice which she did not apply.  Eleonora Buratto does a good job as Donna Anna but she does not seem to communicate well with the sappy Don Ottavio. He does find his voice and delivers promises that do not convince Donna Anna and she dumps him.

Fuchs as Zerlina was a sheer delight with the slight tremolo in her voice as the street-smart country lass marrying the oaf Masetto. The ones that never failed were the English Voices.


The best that can be said for the production is that it is a headscratcher and I will leave it at that.
Posted by James Karas at 1:42 PM