The New Testament story of Salome, her dance of the Seven Veils and the beheading of John the Baptist is surely one of the best known tales of the Western world. South African playwright Yael Farber has tackled the subject again and directs a major production of her play at the National Theatre in London.

The play and the production display some great theatricality. The production touches on oratorio, ballet and stage effects that only a major theatre company like the National can produce. The story itself remains the same but the details are quite different. 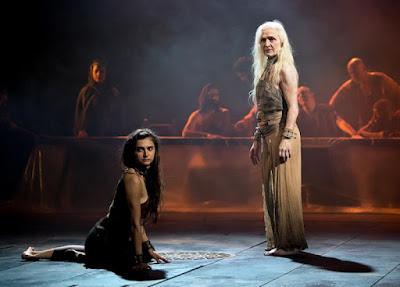 Isabella Nefar as Salomé and Olwen Fouéré as Nameless in 'Salomé' at the
National Theatre Photo: Johan Persson
There is a sandstorm to leave no doubt that we are in a desert kingdom. The huge stage allows for a playing area where we have balletic dancing. There are a couple of singers who chant Middle Eastern hymns and a revolving stage that allows for almost constant movement.

We have two Salomé’s. One of them is Nameless (played by Olwen Fouéré in a long gown and blond wig). The Bible does not give us the name of the woman who asked for the Baptist’s head but Nameless is Salome in old age and acts as a type of chorus in the play.

The “real” Salome is played by Isabella Nefar and she is abused the Romans and leered at by Herod, the Tetrarch of Judea and the Quisling of the Romans (played impressively by Paul Chahidi).

The politics are clear and well-delineated. The might of the Roman Empire represented by the Roman Prefect Pilate (played imperially by Lloyd Hutchinson) is pitted against the religious power of the Judeans represented by Caiaphas (Philip Arditti) and Annas (Raad Rawi).

Iokanaan, the Zealot, aka John the Baptist (played with passion by Ramzi Choukair) brings confusion and hope as a rabble rouser. Wearing only a loin cloth and resembling Christ as represented by Hollywood, he is a firebrand preacher. Unfortunately he does not speak English and surtitles are the means of understanding what he is saying. If there is a compelling reason for this, it escaped me and I found the whole thing annoying. 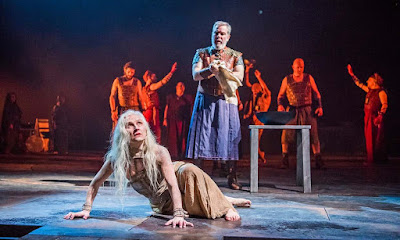 Olwen Fouéré and Lloyd Hutchinson in Salomé
The plot moves very slowly and the real Salome is mostly silent but she does find her voice near the end. There is no dance with veils of any number but Nefar does toss some curtains which may have numbered seven.

Yasmin Levy and Lubana Al Quntar, the Women of Song, added to the religious feel of the play with their chanting. The undulations of Shahar Isaac as the Zealot-to-be gave a certain feel of suffering as well but the brilliant lighting, the stage effects and all the other production values could not raise the play above an interesting but plodding night at the theatre.
_____
Salomé by Yaël Farber opened on May 9, 2017 and continues in repertory at the Olivier Stage, National Theatre, South Bank, London, England. www.nationaltheatre.org.uk.