Before the performance of Carmen begins, the audience is given a warning. There is an appearance of danger during the performance. It is part of the production and not real, we are told.
As you enter the auditorium of the Grand Théâtre de Provence in Aix-en-Provence for Carmen you notice that the stage is decorated with black leather chairs, coffee tables, a water fountain and closed circuit cameras. This looks like the waiting room of a large enterprise yet you have come to see Bizet’s opera which you know is not set in a waiting room. You will soon realize that this is the set for the entire opera and it is in fact the waiting room of a psychiatric hospital 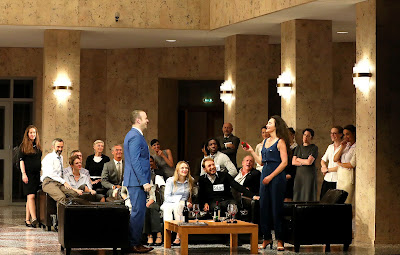 Russian director Dmitri Tcherniakov has turned Bizet’s opera into therapy session for an emotionally disturbed man. I can only describe the transformation as a work of a genius even though I have some reservations about it. How does he do it?

A man and a woman walk into the waiting room and they are met by someone. The couple have come for help with the man’s emotional issues. He wears a blue suit and she has an elegant pink coat. They are told that they will participate in a performance of Carmen as a therapeutic vehicle for the husband. He will take the role of Carmen and she will play Micaela.

The overture begins and we watch a performance of Carmen all in the waiting room. We are reminded a number of times that this is not a performance of Carmen per se but a production in which  hospital staff, including Carmen and the couple who seek help, are performing in order to cure the husband. This does require a few liberties with the libretto which Tcherniakov takes care of but the objective of the performance is always clear.

The problem is that we are removed from the “reality” of the opera and watch an unreal production for a specific purpose. We hear the children’s chorus but there are no children to be seen. The march of the soldiers is indicated by “the hospital staff” who are participating in the therapy but they are dressed in their work clothes and that is all we see in terms of costumes. 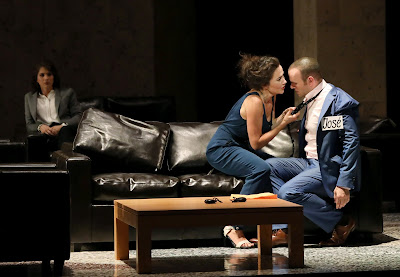 Carmen is limited in her dancing and sexually provocative performance because Lillas Pastia’s tavern is the waiting room and we feel the distance between the realities almost throughout. I say almost because by the end of the performance the pretend and the real Carmen blend into a powerful and wrenching conclusion to the opera that is emotionally draining.

Soprano d’Oustrac has some constraints in her performance. She has a lustrous and luscious voice and can be sexually magnetic but she knows that she is only acting. When the patient’s (as Don José) passion gets too “real” she walks off the stage only to be told that she is a professional and must finish the job. She does not do any dancing but her performance is astounding and by the end there is no “real” or real Carmen just a great performance that garnered an extended and well-deserved standing ovation.

Tenor Fabiano as the patient/Don José has in effect a much better acting opportunity than  a straight Don José. He wants to be sensible and stay with his nice wife who plays Micaela but he cannot control himself. He is thus doubly dramatic as a man and a patient in a performance that leaves you breathless. He has great vocal and emotional impact of the highest order.

We are taken in by Dreisig as the sympathetic wife who takes her husband to seek help and as the lovely and innocent Micaela who, as the latter, is dumped because Don José falls for the loose cannon known as Carmen and as for the former…well, we can only imagine what she must have gone through with him to find herself in a psychiatric hospital, performing in an opera no less.

American baritone Simpson is just what the doctor ordered for an Escamillo, be it as hospital staff or real. Dressed in a white suit, he is heroic, self-assured, vocally superb and utterly romantic and seductive. He will never need a psychiatrist.

The taking of directorial liberties with established works has come under severe criticism but there are examples like Tcherniakov’s productions where the dabbling with the familiar produces a work of genius that most of us could not have imagined.