At the Grand Théâtre de Provence from July 3 to July 16, 2017
The Aix-en-Provence Festival is in full swing with an astonishing array of events in a mere three weeks (July 3 to 22, 2017). Six operas are featured starting with Pinocchio, a new work by Philippe Boesmans receiving its world premiere. And that is just a part of the cultural wealth available. Let’s start with Pinocchio.

The libretto by Joël Pommerat is based on the classic fairy tale by Carlo Collodi. The librettist also directs the production. Pommerat tells the story of the wooden puppet whose nose grows frightfully when he lies. The telling is through a Homeric-type bard, the manager of a travelling theatre company, who is blind, narrates, sings and guides us through the story. He illustrates his darkness for us and we see the story through his own “sight” or darkness. 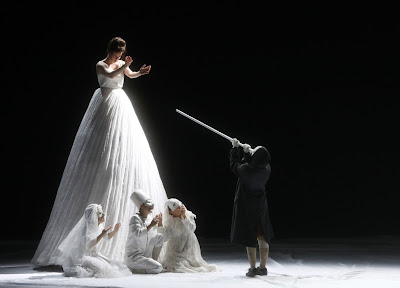 Pinocchio and the Fairy
The tale is also a picaresque story full of adventures as Pinocchio goes through a number of episodes from meeting murderers and a fairy, to going to prison and joining a circus as a donkey, to going to school and finally “growing up.” The picaresque is wrapped in a morality tale (after all it is a children’s story) with lessons like obey your parents, go to school and don’t lie, especially do not lie.

Boesmans has composed a variety of musical styles from recitative, to singing, to some gypsy music as well as some operatic flourishes. Soprano Chloé Briot plays Pinocchio, the rascally puppet who goes through all kinds of misconduct until he is reconciled with his kind Father (bass-baritone Vincent Le Texier).

Pinocchio is dressed in a black coat with a hood over his head and a white mask over his face. We do not seem him as a boy until near the end when he has gone through the transformation of becoming the hero of a morality tale. Briot does an excellent job in the role.

Except for the Fairy, the other main members of the cast take several roles each. Stéphane Dégout in addition to being the manager of the travelling theatre company, also appears as a criminal, a murderer and the manager of the circus. He is quite superb both vocally and as a master of ceremonies, a bard and criminal.

Le Texier plays a murderer, an amusing and exasperated school teacher and the kindly old father who gives “birth” to Pinocchio when his beloved tree is felled by a storm.

Tenor Yann Beuron plays the Judge, the donkey merchant and cabaret manager and two other roles. Mezzo-soprano Julie Boulianne is the cabaret singer and the naughty pupil with some opportunity for humour. Soprano-Marie-Eve Munger plays the Fairy and she gets some of the operatic flourishes as she lectures Pinocchio. A fine cast.

With some exceptions, this is a dark show, full of shadows and smoke. Most of the story is acted in small spaces. There is generous use of projected videos that add tremendously to the dark, ominous atmosphere of the adventures through which Pinocchio passes. The lighting by Éric Soyer is magnificent in adding to the atmosphere of the opera. 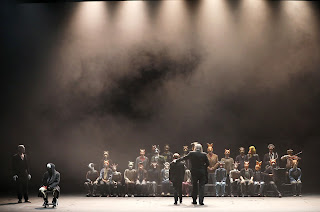 Pinocchio in school
There is a band on stage who(which) play(s) some rousing traditional music. The Fairy, in a long white dress, stands high above the characters on the stage. These are almost the only occasions when the darkness of the production is relieved. The murderers look like Ku Klux Klan members.

The Klangforum Wien was conducted by Emilio Pomarico.

Pinocchio seems to be intended for children and adults. There were numerous children, perhaps as young as six years, in the audience and I am not sure how much of the story they got or enjoyed. There was a youngster sitting beside me who spent most of the time making comments or asking his mother questions about the production. (A future critic?) His mother tried to keep him quiet to no avail and then stuck a lollipop in his mouth. That restrained his commentary for a while but it was replaced by slurping. She must have given up as they did not return for the second act. That was probably the only questionable review that the performance received.