The Athens-based Theatro Technis Karolos Koun has staged a striking production of Euripides’ classic tragedy for the Athens and Epidaurus Festival. The production is being shown in a number of cities around Greece in addition to Epidaurus and I saw it in the open air Roman Theatro Dassous in Thessaloniki.

Marianna Calbari puts her own stamp on the play as director, dramaturge, adapter (the last two with Elena Triantafillopoulou) and actor and the end result is a riveting production. Calbari has added a subtitle calling the play Medea – The Barbarity of Love and has added text and poetry from other classical writers including Plato (Aristophanes’ speech in the Symposium), Theocritus and Sappho.

Her most brilliant stroke is to us give us two Medeas. The first Medea (Maria Nafpliotou), the wife of Jason, lives in Corinth and is the character we know from Euripides. Calbari adds another Medea which she calls the Barbarian (Alexandra Kazazou) and she is the “original” woman from Colchis, the barbaric city on the      eastern shore of the Black Sea, the end of the world

The Barbarian Medea is a wildly sexual and passionate women. We see her rolling on a bed in the throes of ecstasy. This woman sacrificed everything, including her father, out of love for Jason, the hero who went to Colchis to get The Golden Fleece. The Barbarian   has magical powers and whether in Colchis or Corinth she is a woman to be reckoned with. 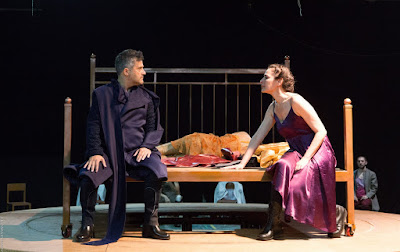 Alexandros Mylonas and Maria Nafpliotou in Madea
The Corinth Medea appears more civilized but she is a woman in agony. After all she did for Jason and the immense love and passion that she feels for him, he leaves her and the children for another woman – the innocent Glauce (Theodora Tzimou), the daughter of King Creon (Alexandros Mylonas). Jason makes a venal and cold-blooded decision in order to get the crown. He serves mealy-mouthed homilies that many husbands have used over the millennia: I still love you and I have to do this. I will give you money and look after you and the children. He goes as far as to say that he is betraying her for her own good!

Haris Fragoulis is a fine actor (and a lousy trumpet player) and his portrayal of Jason as a shallow, selfish and mercenary person is spot on. Interestingly, he considers Medea a monster and states that no Greek woman is like that. The scene between him and Medea where they hurl abuse and pleading is a point of extraordinary drama.

Medea becomes an implacable fury of hatred and vengeance leading to the inevitable destruction. Nafpliotou can display passion, hatred, grief, connivance and murderous fury with superb ability. Kazazou’s role as the alter ego of Corinth Medea is more limited but she gives a superlative performance as a woman of passion.

Calbari takes on the role of Medea’s Nurse and speaks some of Medea’s lines. She chants as well and generally gives a very dramatic performance. Mylonas as Creon in a purple robe is imperious and commanding.
Calbari makes judicious and intelligent use of the chorus with original music by Panagiotis Kalantzopoulos. Movement by Mariza Tsinga and chants used sparingly but very effectively are done exceptionally well avoiding the pitfalls of the use of the chorus that can mar a production.

The set designed by Constantinos Zamanis presents the central image of a large bed on a raised, revolving platform. It is an appropriate symbol of sexual desire and betrayal that starts the entire series of events from the successful theft of The Golden Fleece to the excruciating death of Glauce. The modern costumes do not detract from the drama and the large stage is used effectively.

In short, this is a five star production starting from Calbari’s amazing dramaturgy and adaption, to her superb directing of a talented cast.