The Octoroon is a play by Dion Boucicault which was a hit in New York when it premiered in 1859. Chances are you have never heard of Boucicault or the play but it has earned the accolade of being one of the most popular America melodramas of the 19th century.

The melodrama is not exactly a highly admired genre. It is sensational, provides thrilling suspense, good and evil are clearly delineated, sudden turns in the plot and coincidences are frequent and characterization is minimal. The Octoroon fits the bill. On his return from France, George has inherited a Louisiana plantation that is on the verge of bankruptcy. The evil M’Closky has come to put everything on the auction block, including the slaves. 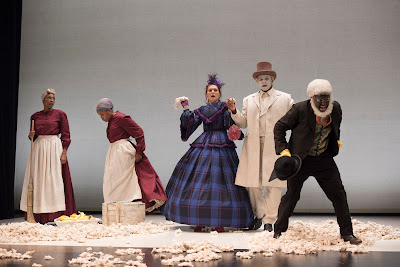 The cast of An Octoroon. Photo by David Cooper.
Dora the rich heiress wants George but he is in love with Zoe but we soon find out that he cannot marry her because she is an octoroon. One-eighth of her blood carries the curse of Cain, it poisons the rest of her blood, makes her unclean and the law forbids her to marry a white person. You know whereof I speak.

Well there are a few plot twists but George gets to keep the plantation, M’Closky has his comeuppance and Zoe and George, well, they do not live happily ever after.

A few years ago playwright Branden Jacobs-Jenkins decided to rework The Octoroon by adding some characters and updating it, but much of the original plot and characters of the play remains. He called his play An Octoroon, i.e. he simply replaced the definite article with the indefinite.

The play begins with a character named BJJ (Andre Sills) which happen to be the initials of the Jacobs-Jenkins. He appears naked except for underwear after we are exposed to some loud and unpleasant music and talks about being a black playwright and the plight of black artists in America.

Then the Playwright appears, also naked except for a pair of shorts. He is in fact Boucicault and the two men spend an inordinate time telling each other to f…off or the presumably euphemistic form, feck.

Sills who is black plays the black playwright BJJ, then puts on white make up and becomes the good guy George, all in white, and then changes into the bad guy M’Closky, wearing all black. He later dresses half in white and half in black with half of his face blackened and half white representing M’Closky and George simultaneously or good and evil combined.

Patrick McManus plays the white Playwright, the Indian Chief Wahnotee with gobs of red makeup on his face and the auctioneer Lafouche, Ryan Cunningham handles three roles: Assistant, Pete and Paul. The slaves Dido, Minnie and Grace are played by Lisa Berry, Kiera Sangster and Starr Domingue respectively. Diana Donnelly plays the heiress Dora and Vanessa Sears is the octoroon. 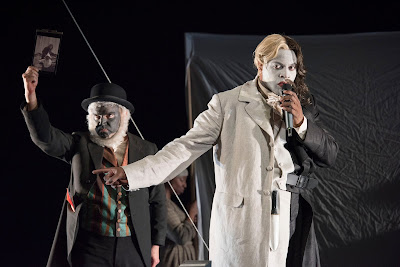 Ryan Cunningham as Pete, André Sills as George and Starr Domingue as Grace in An Octoroon.
Photo by David Cooper.
Jacobs-Jenkins want us to get a good idea of the content and texture of The Octaroon but at the same time he mocks it. BJJ and the Playwright appear and analyze the action and the structure of the play. We watch parts of The Octoroon but we are reminded that this is a production of An Octoroon. Some of the acting and speaking styles are exaggerated lest we forget what play we are watching. The salty language used did not allow you to stray away from the modern version for long.

Director Peter Hinton elicited some fine performances from Sills and McManus who had to handle three roles each. I found Berry, Sangster and Domingue much more enjoyable. Donnelly as Dora was excellent and Sears as Zoe was superb.

I cannot say that I really enjoyed the production. I appreciated the trip to the 1859 play and the attempt by Jacobs-Jenkins to bring it to us mockingly, intelligently and in a very different format albeit with much fidelity to the original. In the end it struck me as being more of an academic exercise than a good night at the theatre.
_____
An Octoroon  by Branden Jacobs-Jenkins continues in repertory until October 14, 2017 at the Royal George Theatre, Niagara-on-the-Lake, Ontario. www.shawfest.com.