One would have thought that 1943 was not a particularly auspicious year for a leap in the development of the Broadway musical. World War II was raging and there was much else to preoccupy the world. Yet with the premiere of Rodgers and Hammerstein’s Oklahoma! an advance was made in producing integrated musicals where the songs advanced the plot and acting became more important. There was precedent for this already but Oklahoma! is a good marking point.

The Glimmerglass Festival production is unfortunately disappointing in many respects. Oklahoma! has some rousing songs, outstanding dance sequels and a good plot but all of that goes to the credit of Richard Rodgers and Oscar Hammerstein II who largely carry the production with some exceptions rather than the other way around.

The major exception is the performance of Jarrett Ott as Curly. He enters from the back of the theatre and sings "Oh, What a Beautiful Mornin' " while walking towards the stage. He has a commanding voice, an impressive presence and dominates the production like a colossus. 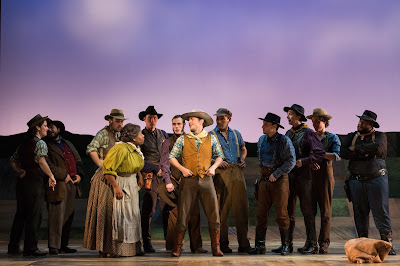 Judith Skinner as Aunt Eller and Jarrett Ott as Curly in The Glimmerglass Festival's 2017 production of Rodgers and Hammerstein's "Oklahoma!"
Photo: Karli Cadel/The Glimmerglass Festival
The rest of the performers fall behind him at various distances. Vanessa Becerra as Laurey has a good but not particularly big voice and she is overwhelmed by Ott. To varying degrees the rest of the cast suffers the same fate. Without Ott, many would have been adequate to say the least.

There are some dramatic scenes and some comic ones with Emma Roos as the dippy Ado Annie providing some laughter.

Color-blind casting is well-established and never raises an eyebrow but in this case it did. In the first scene we see a middle-aged black woman on stage and since we are in 1906 Indian Territory, the future Oklahoma, when we see a black woman we think of a servant or worse. In this case, African-American Judith Skinner plays Aunt Eller. She does a good job but decades of not seeing a black woman of the time in a role like that struck one, quite disgracefully, as peculiar. 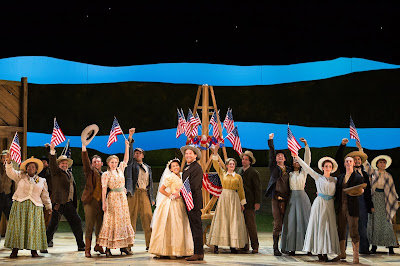 With songs like "The Surrey with the Fringe on Top," the beautiful "People Will Say We're in Love" and the rousing "Oklahoma!" you will not be left twiddling your thumbs. But we expected more from director Molly Smith and choreographer Parker Esse who either did not have the best cast or simply did not bring out the best in what they had.

No issue with conductor James Lowe and the Glimmerglass Festival Orchestra and Chorus.

The set by Eugene Lee purported to present a scene or a vista of the wide-open territory. There was very little of that and the set appeared plastic and unimpressive.
_____
Oklahoma!  by Richard Rodgers (music) and Oscar Hammerstein II (book and lyrics) based on Green Grow the Lilacs by Lynn Riggs will be performed thirteen times between July 8 and August 22, 2017 at the Alice Busch Opera Theater, Cooperstown, New York. Tickets and information (607) 547-0700 or www.glimmerglass.org
Posted by James Karas at 8:05 PM