Francesca Zambello, the Artistic and General Director of the Glimmerglass Festival has programmed and assigned directorial duties to herself of Porgy and Bess, perhaps one of the most important American operas. She has pulled out all the stops to stage the signature production of the season and has scored a resounding success. 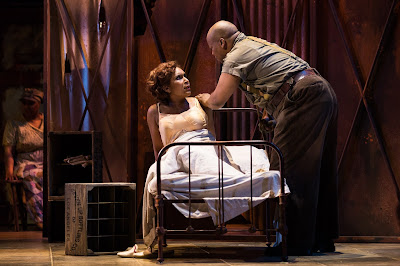 Talise Trevigne as Bess and Musa Ngqungwana as Porgy: Karli Cadel/The Glimmerglass Festival
Porgy is a crippled beggar who drags himself across the stage supported by a crutch. His physical deformity is counterbalanced by his essential humanity and decency. South African bass Musa Ngqungwana sings with a resonance and emotional depth that surpasses the cruelty and evil that surrounds him. His love for Bess is unconditional and immeasurable right to the last chord of the opera when he manages to strike a note of faith, even optimism in a milieu that offers none. When he sings the moving “I Got Plenty of Nothin” his voice and emotion resonate through the theatre. A stupendous performance.

Bess (Talise Trevigne) is the classic victim of her station in life, her sex, her possessive lover Crown, her drug dealer Sportin’ Life and her physical attractiveness. In her own way, she is just as crippled as Porgy.

There is no shortage of cruelty in the slum of Catfish Row. Crown is a lanky, musclebound thug. He runs away after killing someone and on his return claims Bess who has fallen in love for Porgy. She resists but he brutalizes her mercilessly. Norman Garrett plays the frightful Crown and gives a scary portrayal of the self-absorbed brute. 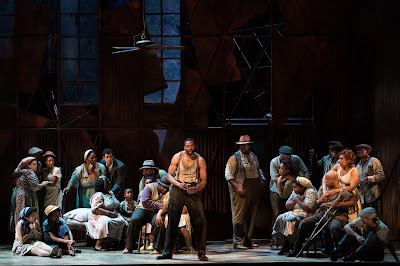 Norman Garrett as Crown. Photo: Karli Cadel/The Glimmerglass Festival
Sportin’ Life is the local drug dealer and he offers a better life to Bess presumably because he has money. He gives her drugs but she rejects his offer to go to New York. She is rejected by everyone as she knocks on their doors except for Porgy, the beggar, the cripple and another “reject.” Listen to the lyricism and passion of Porgy and Bess’s duet “Bess, You Is My Woman Now” and you have been repaid for the price of admission many times over.

Talise Trevigne’s Bess is attractive, compassionate, tortured and in the end selfish in her betrayal of Porgy for the drug dealer. In other words, she is human. Trevigne has a marvelously strong and dramatic voice and she displays a tremendous emotional range in her performance.

The opera has more than twenty singing roles and no faint-hearted director need apply for the job. But Zambello has directed the opera before and her panache shows. There are outstanding soloists but even more so superb ensemble singing.
The Glimmerglass Festival Orchestra and Chorus under John DeMain perform superbly.

Opera at its best.
_________________
Porgy and Bess by George Gershwin, Ira Gershwin, Dubose Heyward and Dorothy Heyward will be performed thirteen times between July 7 and August 21, 2017 at the Alice Busch Opera Theater, Cooperstown, New York. Tickets and information (607) 547-0700 or www.glimmerglass.org
Posted by James Karas at 1:43 PM