The Stratford Festival is once again visiting Ancient Greek drama with a stunning production of Bakkhai by Euripides at the Tom Patterson Theatre. It uses Anne Carson’s translation and adaptation and she prefers to transliterate the title of the great play her way instead of the more traditional Bacchae.

No doubt you are keeping track of the Festival’s production of Greek drama and recall that the Bacchae was produced there in 1993 in a redoubtable staging by David William with Colm Feore, Ted Dykstra and Barbara Bryne. Otherwise the Festival seems to go into allergic reaction at the thought of producing classical drama but there are exceptions and that is another issue. 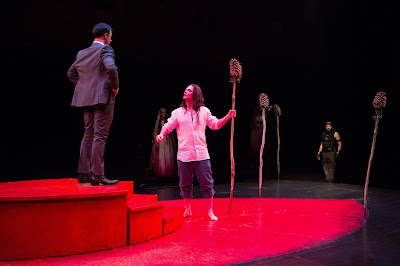 From left: Gordon S. Miller as Pentheus, Laura Condlln as a member of the Bakkhai, Mac Fyfe as Dionysos
and Brad Hodder as Guard in Bakkhai. Photography by Cylla von Tiedemann.
Jillian Keiley directs the current production with intelligence, knowledge and an intuitive feel for Greek drama. She makes brilliant use of the Chorus and has some marvellous staging effects to give us an outstanding Bakkhai.

From the little that we know or can infer from Ancient Greek tragedy, the productions were more operatic than straight plays. The productions had music and the Chorus sang or chanted some of the poetry written for it especially the choral odes. How do you handle the issue today? If the leader of the Chorus speaks the lines, then the poetry allotted to the Chorus become prosaic. If they all speak together, it may be difficult to understand them or, worse, they sound ridiculous.

Keiley has found a splendid compromise. The Chorus (the Bacchae or devotees of Dionysos a.k.a. Bacchus) speak, sing, chant and dance to music composed by Veda Hille. Hille’s music plays a key role in the success of the production. In its lyricism and punctuated sections, it fits the poetry and the mood of the play. The choral odes are no longer impediments to the action but become integrated into the drama. A major achievement.

The Bakkhai is about the arrival of a new religion in Thebes which Pentheus, its king, and the women of the city reject. Dionysos whose mother Semele was a Theban and Zeus was his father comes disguised as a mortal to wreak revenge on the people of his native city. Mac Fyfe’s Dionysos is petulant, arrogant, effeminate, vengeful and with has a huge chip on his shoulder.

The youthful Pentheus, his cousin, rejects the new religion. Wearing a suit, Gordon S. Miller as Pentheus is arrogant, puritanical, ill-tempered, violent and a law-and-order ruler. He has a lot in common with Dionysos even though they are on opposite sides of the religious issue. Dionysos has the upper hand, of course, because he is a god and he will wreak unbelievable vengeance on the Thebans. 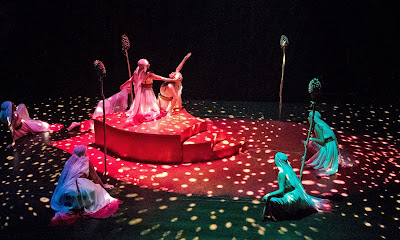 Members of company in Bakkhai. Photography by Cylla von Tiedemann.
Graham Abbey plays the seer Teiresias and Nigel Bennett plays Kadmos, the father of Pentheus. They represent their characters as old codgers with a bit of humour if that can be said to exist in the play. Lucy Peacock plays the role of Agave, Pentheus’s mother and what she does defies the imagination. You may not know the plot of the play and I will not spoil it for you.

Keiley uses Anne Carson’s adaptation. It is poetic and colloquial. Some of the modernisms may go too far (“he’s a shrewd manager of data.” “Call a cab.” Dionysos describes himself as a daimon and explains that “there is no word for it in English.”) The cast handled the language with ease and the performances from the Herdsam of E.B. Smith to the main characters were stellar.

The set by Shawn Kerwin consists of a raised platform in the centre of the Tom Patterson stage. There is extensive and highly effective use of lighting by Cimmeron Meyer and sound by Don Ellis.

Bakkhai was written by Euripides in 405 B.C. near the end of his life while he was living in exile in Macedonia. It is a complex play that has kept scholars and philosophers busy for more than twenty four centuries. Better still, it has kept theatre lovers fascinated since its premiere in Athens in the early hours of the morning in March 405 B.C. at a theatre and a festival named after Dionysos. It won first prize.
_______________


Bakkhai by Euripides in a version by Anne Carson continues until September 23, 2017 at the Tom Patterson Theatre, Stratford, Ontario. www.stratfordfestival.ca
Posted by James Karas at 11:53 AM