THE MADWOMAN OF CHAILLOT – REVIEW OF 2017 STRATFORD FESTIVAL PRODUCTION

Near the end of the first act of The Madwoman of Chaillot, a character called The ragman tells us that the world has been invaded by evil people. The world and people are no longer beautiful and everything is run by pimps, the butcher, the grocer, the garage man, all are controlled by pimps. The moral degradation of the world is complete.

Jean Giraudoux wrote his allegorical drama during World War II and he tried to illustrate the condition of France in a play with more than fifty characters covering the gamut of the social ladder. At one extreme are the capitalists, ruthless, exploitive, wealthy, greedy and evil. At the other end are the workers, the street people and the entertainers - the victims of the capitalists. . In the middle we have four ladies, the madwomen, who appear a bit looney but who have the drive and imagination to stand up to the capitalists. Will they be able to save civilization as we know it? 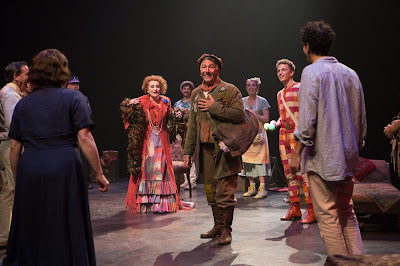 Members of the company in The Madwoman of Chaillot. Photography by Cylla von Tiedemann.


Donna Feore directs the very large cast in the theatre-in-the-round Tom Patterson with considerable effectiveness albeit a bit sluggishly in the first act.

In the first act, The President (Ben Carlson), The Baron (David Collins), The Prospector (Wayne Best) and The Broker (Rylan Wilkie) plan to create a corporation, take people’s money, manipulate the stock market and make untold amounts of money. As they make their plans in an outdoor café in the Chaillot area of Paris, they are accosted by a large number of “ordinary” people including a singer (Mike Nadajewsky), a policeman (Tim Campbell), a shoelace peddler (Qasim Khan) and others. The capitalists treat everyone with contempt.

An imposing lady named Comtesse Aurélie, The Madwoman of Chaillot, appears and she shows neither fear nor respect for the crude capitalists.

The problem with the first act is the large number of people who come on and off the stage. It is difficult to maintain the pace and focus until near the end when The Ragman appears and he dominates the last part of the act. Here Scott Wentworth gives a fine performance as he describes the moral swamp that the world has become. He has another superb scene in the second act when he “defends” the immorality that has befallen the world. 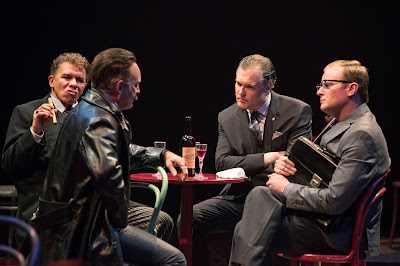 From left: David Collins as The Baron, Wayne Best as The Prospector, Ben Carlson as The President and
Rylan Wilkie as The Broker in The Madwoman of Chaillot. Photography by Cylla von Tiedemann.
The second act is more tightly constructed as the capitalists get their comeuppance. The play has four madwomen and there is a marvelous scene as we get to know the somewhat looney ladies who are somewhat detached from reality but have not left it by any means. Seana McKenna plays the main role and gives her usually superb performance. Her Madwoman has some loose screws but she knows precisely what she wants to achieve and that is to save civilization. She achieves a combination of flightiness, and purpose that is quite a thrill to watch.
Constance, The Madwoman of Passy (Kim Horseman) imagines she has a dog with her. She veers between out and out delusional and pleasantly enjoying the illusion of having a dog without losing complete touch with reality.   Yanna McIntosh is tough and assertive as The Madwoman of Concorde but she is in the same zone that is between suffering from delusion and enjoying an illusion. As is the virgin Gabrielle, The Madwoman of Saint-Sulpice played by Marion Adler.

The set by Teresa Przybylski consists of tables and chairs indicative of an outdoor café for the first act and a grab-bag of furniture for the basement room of the second act. Quite fine especially within the limitations of the theatre-in-the-round.

In addition to the outstanding McKenna, Feore has assembled some of Stratford’s finest for the production. Ben Carlson as the President and his capitalist cronies make a frightful quartet of money grubbers that Giraudoux holds up to ridicule and contempt.


The Madwoman of Chaillot by Jean Giraudoux continues in repertory until September 24, 2017 at the Tom Patterson Theatre, 111 Lakeside Drive Stratford, Ontario. www.stratfordfestival.ca
Posted by James Karas at 2:19 AM