The Stratford Festival has decided to mark the 150th anniversary of the beginning of the Canadian nation by commissioning a play that covers our history, in the words of the 2017 brochure, from “First Contact to a future ravaged by climate change.” That is very ambitious and in the words of Alfred P. Doolittle, it is “the right and proper thing to do.”

The play is The Breathing Hole by Colleen Murphy and it has been given a relatively short run by the Stratford Festival (July 30 to September 22, 2017) in the small Studio Theatre. It covers some 500 years from 1534 to 2034 of history with the dominant feature being a couple of polar bears, Angu'juaq (Bruce Hunter) and Panik (Jani Lauzon).

The polar bears are very well designed large puppets reminiscent of the performances of War Horse doing some very convincing bear-like movements. One of the bears is saved while a cub by Huumittuq (Jani Lauzon), an elderly Inuit woman who raises him as her son. 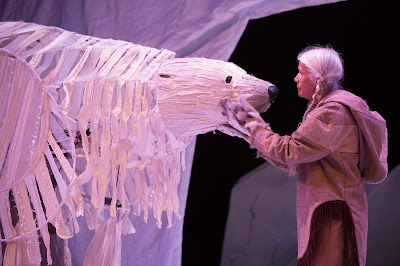 The bears are smarter, better mannered, more humane, generous and sympathetic than some of the people. And they are able to understand Inuktitut. Despite contact with British explorers, they do not acquire any knowledge of English. Therein lies a problem. No, not in the bear’s failure to understand English but in their ability to comprehend Inuktitut and to act almost like human beings. It is one thing for the Inuit to worship the spirit of the polar bear, but it is quite another for the polar bear to stop mauling a man because it is asked to.

If The Breathing Hole is about the creation of Canada, there is almost nothing about its history as a colony that evolved as a nation. It starts with a group of Inuit in 1534 when the bear is saved by Huumittuq when some of the original inhabitants of what was to become Canada were happy, hungry, struggling, arguing and dancing to 1550 when the bear is grown up and things are changing.

From there we move to 1845 and meet members of the disastrous Franklin expedition. Randy Hughson plays the ineffectual, almost buffoonish Sir John Franklin leading a crew of ridiculous men. They speak with horrible accents and are totally unconvincing or annoying. The lowlight is an attempt at crude humour by the Inuit and the British bragging about the dimension of their genitals. Some of the dialogue is not only inept it is endlessly irritating.

From the scene in 1847 when we see the remnants of the Franklin expedition near its demise we jump to 2028 when the pristine Arctic of the previous scenes becomes a place for ecotourism. The ice has melted, there is drilling for oil and the Inuit and the non-natives are collaborating in the exploitation of land and people for money.

The final scene takes place on a cruise ship on New Year’s Eve where people are dressed and acting stupidly but there is a very dramatic if improbable final tableau.

Director Reneltta Arluk seems to prefer overacting to subtle performances and the actors fulfilled her instructions by jumping, screaming and being ridiculous or annoying in far too many instances. There was no consistency in the casting of the Inuit characters and the result was rather bizarre. Ujarneq Fleischer played the hunter Avinngaq. He is from Greenland and he had considerable difficulty with enunciating his lines. Lauzon was very affecting as the outsider in the Inuit community. 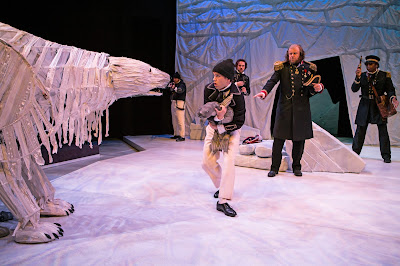 Members of the company in The Breathing Hole. Photography by Cylla von Tiedemann.
The set by Daniela Massellis emphasized the stark whiteness of the ice and snow of the north and was quite effective.

There is no doubt that an immense amount of work has gone into the creation and production of The Breathing Hole. In addition to the usual artistic crew, there were Inuit dramaturgy and Cultural consultation, Inuktitut consultation and translation (the play is partly bilingual), Inuit props, costume and makeup consultants and a significant number of artists who participated in the development of the play. Not to mention that no fewer than eight doctors were consulted.

Unfortunately effort does not equal result. Murphy has tackled a grand theme at the right time. A part of the Inuit story is brought on stage including an indigenous director and a number of indigenous actors. All of it highly laudable. Unfortunately, the final result falls short of expectation.
__________________


The Breathing Hole by Colleen Murphy continues in repertory until September 22, 2017 at the Studio Theatre. 34 George Street, Stratford, Ontario. www.stratfordfestival.ca
Posted by James Karas at 11:48 PM