THE SIEGE OF CALAIS – REVIEW OF 2017 GLIMMERGLASS FESTIVAL PRODUCTION

The Glimmerglass Festival is in full swing and provides a cultural experience of the first order in a bucolic setting which might make you think of Arcadia. Where else do you find pastoral harmony and cultural pleasure? For the uninitiated, the Festival takes place on Lake Otsego a few miles from Cooperstown, N.Y. Yes, that is where the Baseball Hall of Fame is but you do not need Special Dispensation to go to both. Seeing the heroes of baseball, operas and a myriad of other cultural activities have been proven to provide have spiritual, emotional and physical benefits. Try getting that in front of a picture of Babe Ruth.

The Siege of Calais, Donizetti’s 48th opera, was a hit in Naples when it premiered in 1836. It did okay until 1840 and then it was mothballed for a nifty 150 years. It was resuscitated by Opera Rara and was even produced on stage. The uncontrollable desire, not to say ambition, to produce the opera in the United States took a few years, until July 2017 to be precise, when the Glimmerglass Festival raised the siege and produced it. 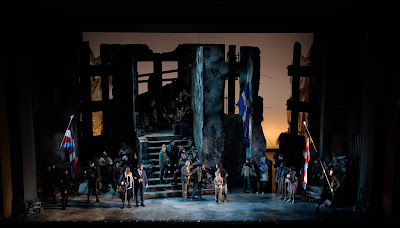 The Glimmerglass Festival's 2017 production "The Siege of Calais." Photo: Carrington Spires/The Glimmerglass Festival
The Siege of Calais is quite a remarkable work partly for historical reasons (Donizetti trying to break into the Parisian market with a “French” opera – it did not work) and partly as an opera that deserves to be produced on its own merits. It needs some dramaturgy (it has a third act that requires surgery amounting to excision) but Francesca Zambello, the Artistic and General Director of the Glimmerglass Festival and Music Director Joseph Colaneri have done the judicious editing that resulted in a brisk and fine production of the neglected work.

The siege refers to the blockade of the French port city by the English army under King Edward III in 1346 that resulted in its capitulation in about a year. As such it was an ordinary siege except for the fact that Edward agreed not to slaughter the citizens provided that six nobles agreed to be executed. That and Rodin’s famous statue of “The Burghers of Calais” has helped raise the garden-variety siege into something of mythical proportions.

Librettist Salvadore Cammarano tells the story through Eustachio, the Mayor of Calais, his son Aurelio and the burghers. Emotional punch is delivered by the fate of the people but it is enhanced by the presence of Aurelio’s wife Eleonora and his young son. When Edward demands six victims Eustachio, Aurelio and four others volunteer. The tragedy is averted by the entrance of Edward’s wife Queen Isabella. The six may be saved but the residents know that they have lost everything. 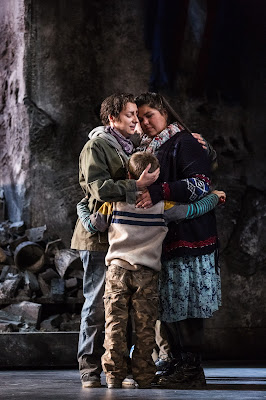 Aleks Romano as Aurelio, Rock Lasky as Filippo, and Leah Crocetto as Eleonora in "The Siege of Calais." Photo: Karli Cadel/The Glimmerglass Festival
American mezzo-soprano Aleks Romano leads the cast in the pants role of Aurelio. She sings with assurance and conviction in one of the best portrayals of a man by a woman. She has the gait, movements and mannerisms of a man. That is the least of her accomplishments because she has a firm, commanding and marvelous voice to give a memorable performance.

She is well-matched by soprano Leah Crocetto as her wife Eleonora who has a large, indeed powerful, voice such that when she belted out some phrases in the small Alice Busch Opera Theatre she sounded as if she could shatter glass.

Adrian Timpau as Eustachio has an impressive, big voice but unfortunately it displayed strength without color.

Zambello sets the production in a modern city that has been gutted by bombs. There are numerous examples of such cities in the news almost daily and the setting could not be more appropriate. Scenery Designer James Noone set consists of a revolving shattered building for most of the performance with the exception of a wall representing Calais on the outside.

The Glimmerglass Festival Orchestra and Chorus perform under the baton of Joseph Colaneri.

Donizetti as a composer had many virtues and not a few drawbacks. The Siege of Calais is by no means one of his best operas but it deserved to be produced.

Only at Glimmerglass, eh!
_____
The Siege of Calais by Gaetano Donizetti (music) and Salvadore Cammarano (libretto), is being performed eight times between July 16 and August 19, 2017 at the Alice Busch Opera Theater, Cooperstown, New York. Tickets and information (607) 547-0700 or www.glimmerglass.org
Posted by James Karas at 11:07 PM