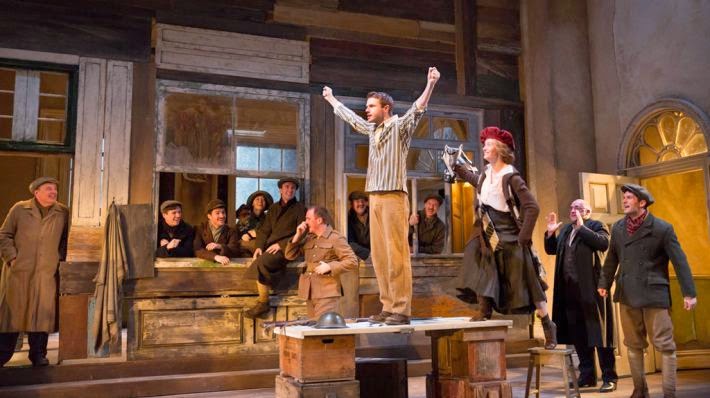 In the final scene of The Silver Tassie five couple are shown dancing cheek-to-cheek. The women are dressed in evening gowns and the men are wearing military uniforms. It is the end of the Great War and they seem to be enjoying the occasion. But there is something wrong. We notice that the male partners are in fact mannequins. They are what is left of the men who went off to war.

It is a startling and brilliant scene in Howard Davies’ direction of the rarely performed play that Sean O’Casey wrote in 1927-28.

The silver tassie of the title is a cup won for the team by Harry Heegan (Ronan Raftery), a handsome youth in his prime and glory. He is the town hero and in love with the lovely Jesse (Deirdre Mullins). The time is before World War I and the scene is the Heegans’ tenement in Ireland. We meet a number of people including Sylvester Heegan (Aidan McArdle) and his friend Simon (Stephen Kennedy), a couple of nincompoops representing another aspect of Ireland. The sexy and attractive Jesse is contrasted with the religious fanatic and you-will-go-to-hell spouting Susie (Judith Roddy).

The second act takes place on a battlefield somewhere in France. O’Casey strays into expressionism in the scene by using a different set of characters from the first act. His success is questionable but the production does provide some of the loudest and most sustained sounds of bombardment that I have ever heard in the theatre.

The third act takes place in a hospital ward. The victims of the war have become numbers. Simon and Sylvester are in the ward but they are not suffering from any apparent injury even though Sylvester is about to have an operation. They are as useless after the war as they were before.

But there is one victim that is truly injured. Harry is paralyzed below the waist and he is shell-shocked, as they used to say. He is anxious to see Jesse only to find out that Barney (Adam Best), the man who saved his life on the battlefield, is now in love with her. It is a devastating blow. Teddy (Aidan Kelly) is blind. A stretcher with the sheets pulled over a body is wheeled across the stage. The war has had a devastating effect.

In the final act, there is a dance at the football club, the same club where Harry became a hero by winning the silver tassie. There are medals on the men’s chests. They are war heroes celebrating or attempting to celebrate the end of the war and the team’s silver tassie. But we soon realize that they are no longer men, let alone heroes.

It is a supremely well directed and well-acted production. Raftery is excellent as the hero of the first act and the human wreck in the final scenes. McArdle and Kennedy do well as the clowns who seem untouched by the war.

The religious Susie of the first act changes into a flirtatious nurse in the hospital ward who is being chased and grabbed by the surgeon (Jim Creighton). The war has not only maimed people and relationships; it seems to have killed God and religion.
__________

The Silver Tassie by Sean O’Casey opened on April 23, 2014 and continues at the Lyttleton stage of the National Theatre, South Bank, London, England.
Posted by James Karas at 10:49 PM