MOTHER COURAGE AND HER CHILDREN - REVIEW OF STRATFORD FESTIVAL PRODUCTION 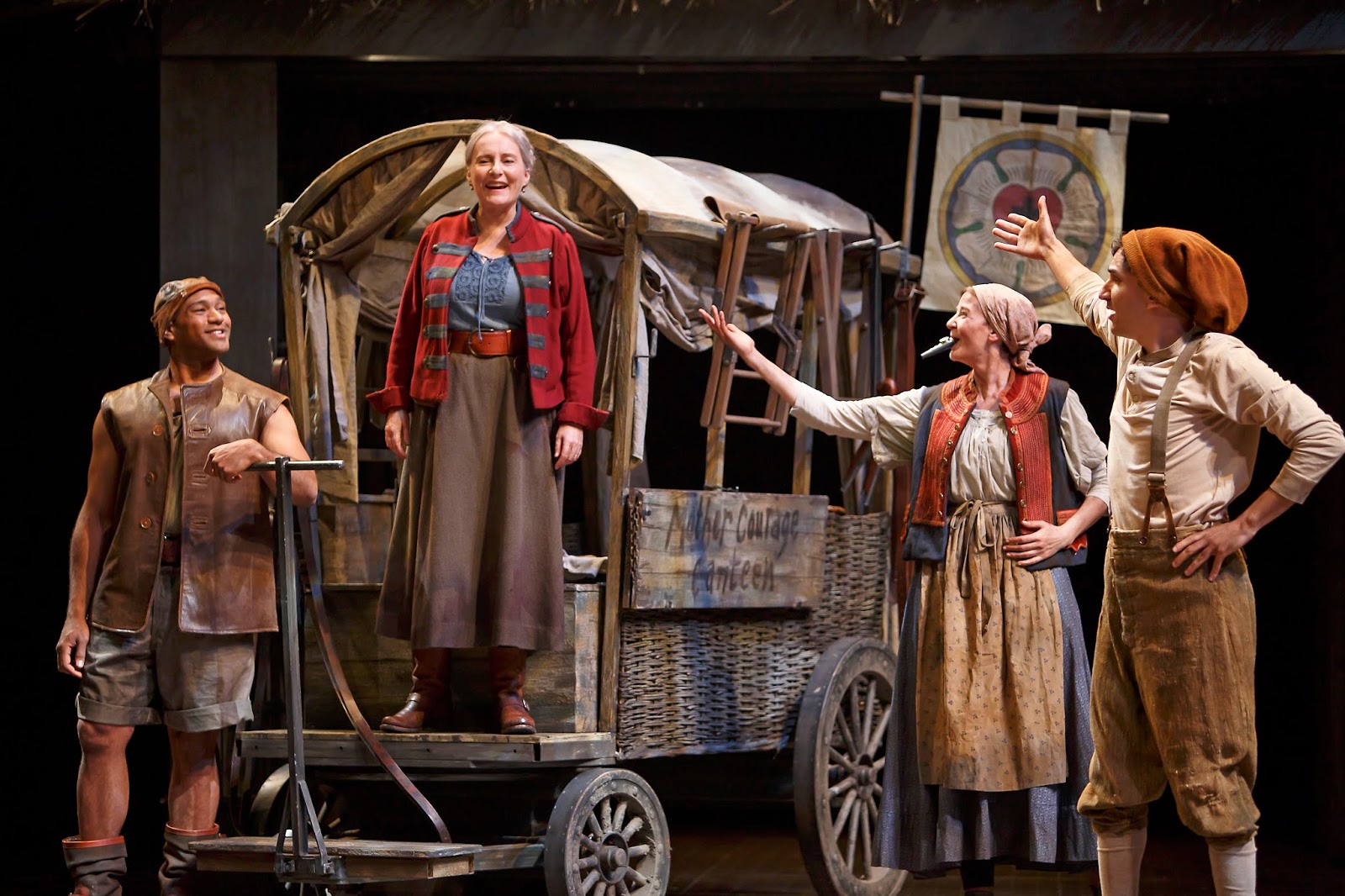 Mother Courage and her Children is Bertold Brecht’s sprawling chronicle about war and capitalism and the Stratford Festival has given it a highly respectable production directed by Martha Henry. The Festival has ventured infrequently into Brechtian territory and I suppose we should be grateful for this display of adventurous programming.
Mother Courage is an antiwar play set during the Thirty Years War (1618-1648). Anna Fierling, nicknamed Mother Courage, with her iconic wagon follows armies across Europe and supplies them with provisions of every sort
Henry has assembled some of the Festival’s best actors starting with Seana McKenna in the lead role.  She is accompanied by her three children, Eilif (E. B. Smith), Swiss Cheese (Antoine Yared) and the dumb Kattrin (Carmen Grant). Her sole ambition is to profit from the war even as she loses her children one at a time.
The play has some dramatic and possibly wrenching moments but Brecht and consequently Henry refuse to allow us to engage in such emotionalism. Masters of Ceremonies intervene to remind us that we are being told a story and not watching realistic re-enactment of events that draws on our sympathy.
McKenna shows some of Mother Courage’s roughhewn and earthy character but we almost never sympathize with this classic capitalist who profits from war and the last thing she wants to see is peace. Everything and everyone in her world is a commodity.
Henry strikes a fine balance between telling a dramatic series of events and forcing us to keep some distance from them. The actors display signs telling us where we are. Before the performance begins and during the intermission, the actors mingle and chat with the audience and there are musicians on stage. All of that is intended to add a barrier between the pretence of reality and reality itself. We are watching a show and Brecht wants us to know it. Martha Henry wants us to know it too. 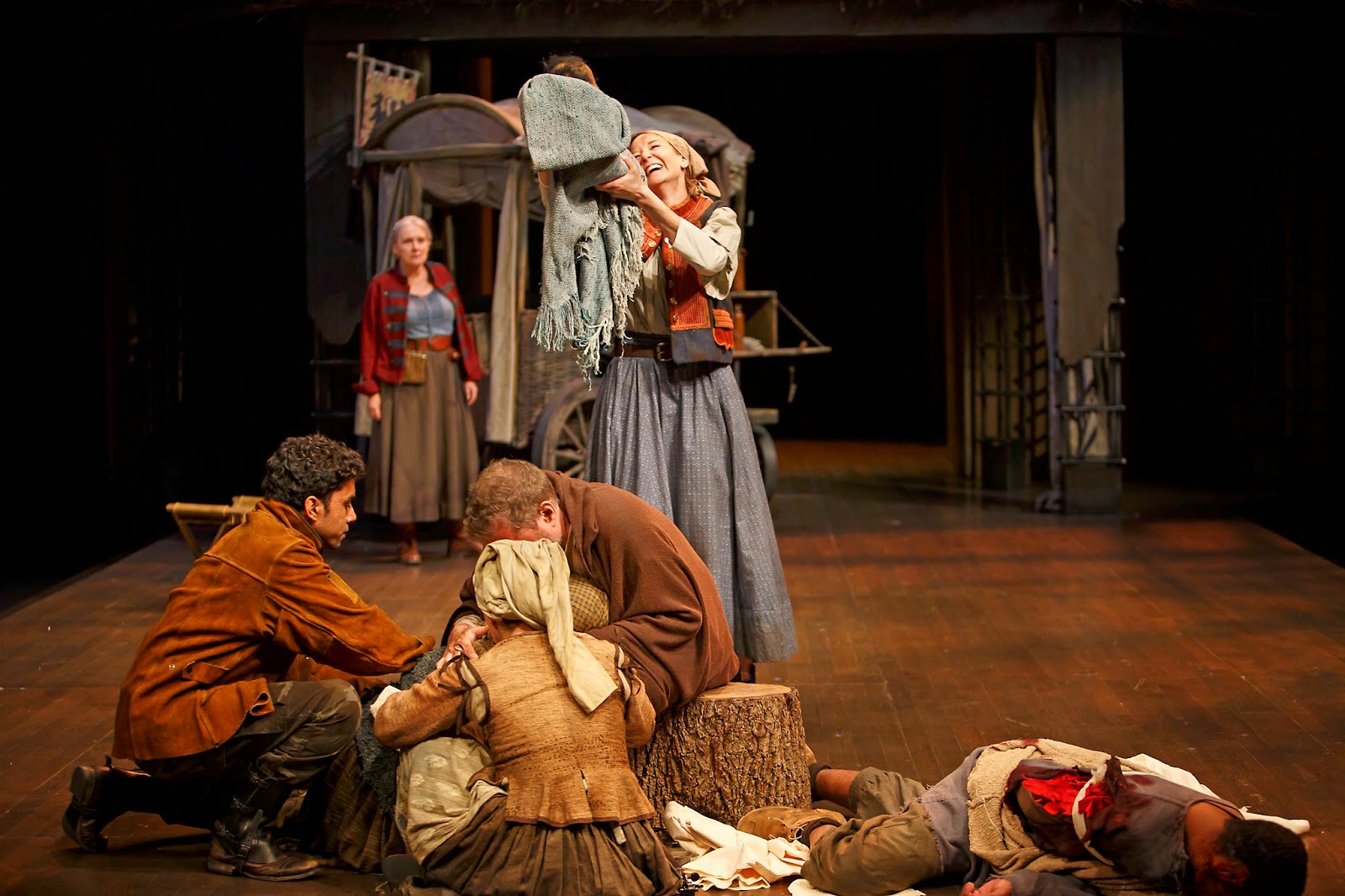 Seana McKenna (background) as Mother Courage and Carmen Grant (centre) as Kattrin with members of the company. Photo by David Hou.

Eilif, the tough cattle thief, becomes a hero because of his ability to steal in war but fares badly in peace. Her stupid son Swiss Cheese steals the cash box but is killed. Kattrin shows humanity and compassion when she tries to warn the citizens of an impending attack but she too ends up as a victim of the war.

There is a large cast of characters that surround the cart and Mother Courage.  The prostitute Yvette (Deidre Gillard-Rowlings),  the cook (Geraint Wyn Davies), the priest (Ben Carlson),  the Masters of Ceremonies (Randy Hughson and Sean Arbuckle), officers, soldiers, spies, farmers and others. In other words, there is almost a cross-section of society.
The wagon and the tree stump are just about the only props and set designed by John Pennoyer.
The translation by David Edgar is colloquial and uses very salty language. Eric Bentley’s 1955 version is practically antiseptic in comparison.
The production does justice to the play and McKenna gives a memorable performance. Go see it. It may be a while before another Brecht play is produced by the Stratford Festival.
______
Mother Courage and her Children by Bertold Brecht opened on May 30 and will continue in repertory until September 21, 2014  at the Tom Patterson Theatre, Stratford, Ontario. www.stratfordfestival.ca