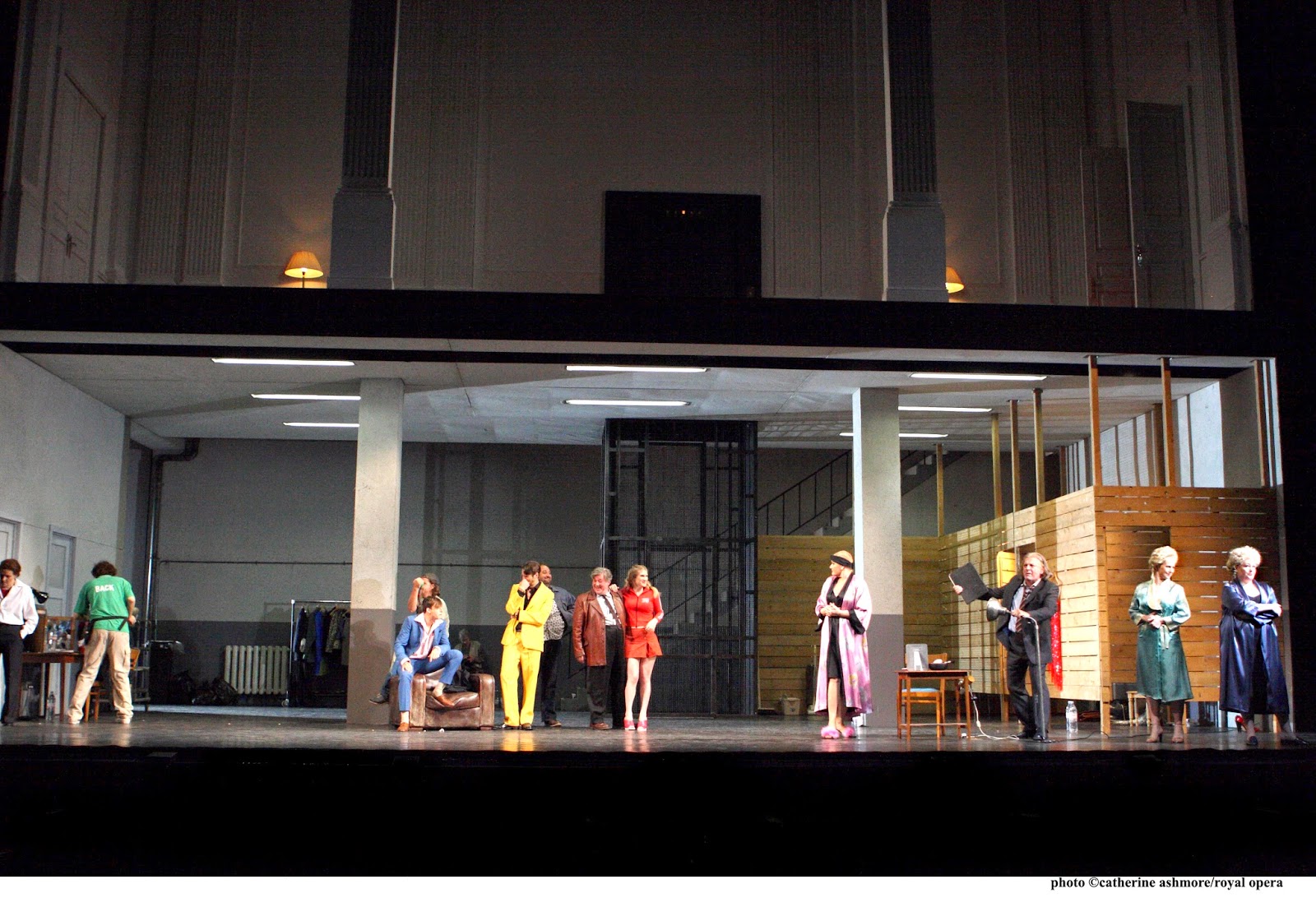 Richard Strauss’s Ariadne auf Naxos is a smorgasbord of an opera that seems to suffer from a serious identity crisis. It has a Prologue with dialogue and singing set in a Viennese mansion where the wealthy has plans for lavish entertainment. If all goes well, there will be an opera, Ariadne auf Naxos, a comedy, The Fickle Zerbinetta and fireworks.

The Royal Opera House has revived its 2002 production by Christof Loy conducted by Antonio Pappano. It must be judged a success for the imaginative design and direction with a first rate cast and identity be damned. After more than a century it should figure out where it stands.

The vocal power and beauty belong to Karita Mattila and Jane Archibald. Mattila is the Prima Donna in the Prologue and the long-suffering Ariadne in the Opera. She has a lustrous voice and contends with some almost Wagnerian demands on it with unerring success.

Canadian soprano Archibald has the more fun role of Zerbinetta in both the Prologue and the Opera. Torontonians will recall that she sang the role he role with the Canadian Opera Company in 2011 and managed the vocal acrobatics and the comic business demanded of her with aplomb then and now.

The opera has a dramatic (very dramatic) Tenor in the Prologue who becomes Bacchus is the Opera and Roberto Sacco soars through the role. Veteran baritone Thomas Allen recreates the role of the Music Master and sings well despite a ridiculous wig.

The opera has three singers (Sofia Fomina, Kiandra Howarth, and Karen Cargill) in the Prologue who become a Naiad, a Dryad and Echo in the Opera and sing well in both.

The Prologue takes place is two worlds: “upstairs” where the dinner guests are received in palatial surroundings and “downstairs” where the producers of the Opera and the comedy bicker. There is also the third world of Naxos in the Opera.

Loy and Designer Herbert Murauer have come up with a brilliant design to show the upstairs and the downstairs. As the guests and artists arrive, the first are led to the main floor of the house and the second are directed to an elevator. The elevator goes “down” by having the main floor raised. As the saying goes, if you can’t raise the bridge, lower the river. In this case it works in reverse and it is an eye-catching and brilliant tableaux, to say the least.

Antonio Pappano conducted the original Loy production in 2002 and he and the Orchestra of the Royal Opera House handled the score with assurance.

Sigmund Freud was in his heyday when Strauss and his librettist Hugo von Hofmannsthal composed the opera in 1912 and revised it 1916. If there were any issues of identity, there was room for all of them on his couch. I have a feeling we are the ones with the identity issues. Where is Sigmund when you need him!
__

Ariadne auf Naxos by Richard Strauss opened on June 25 and will be performed five times until July 13, 2014 on various dates at the Royal Opera House, Covent Garden, London, England. www.roh.org.uk