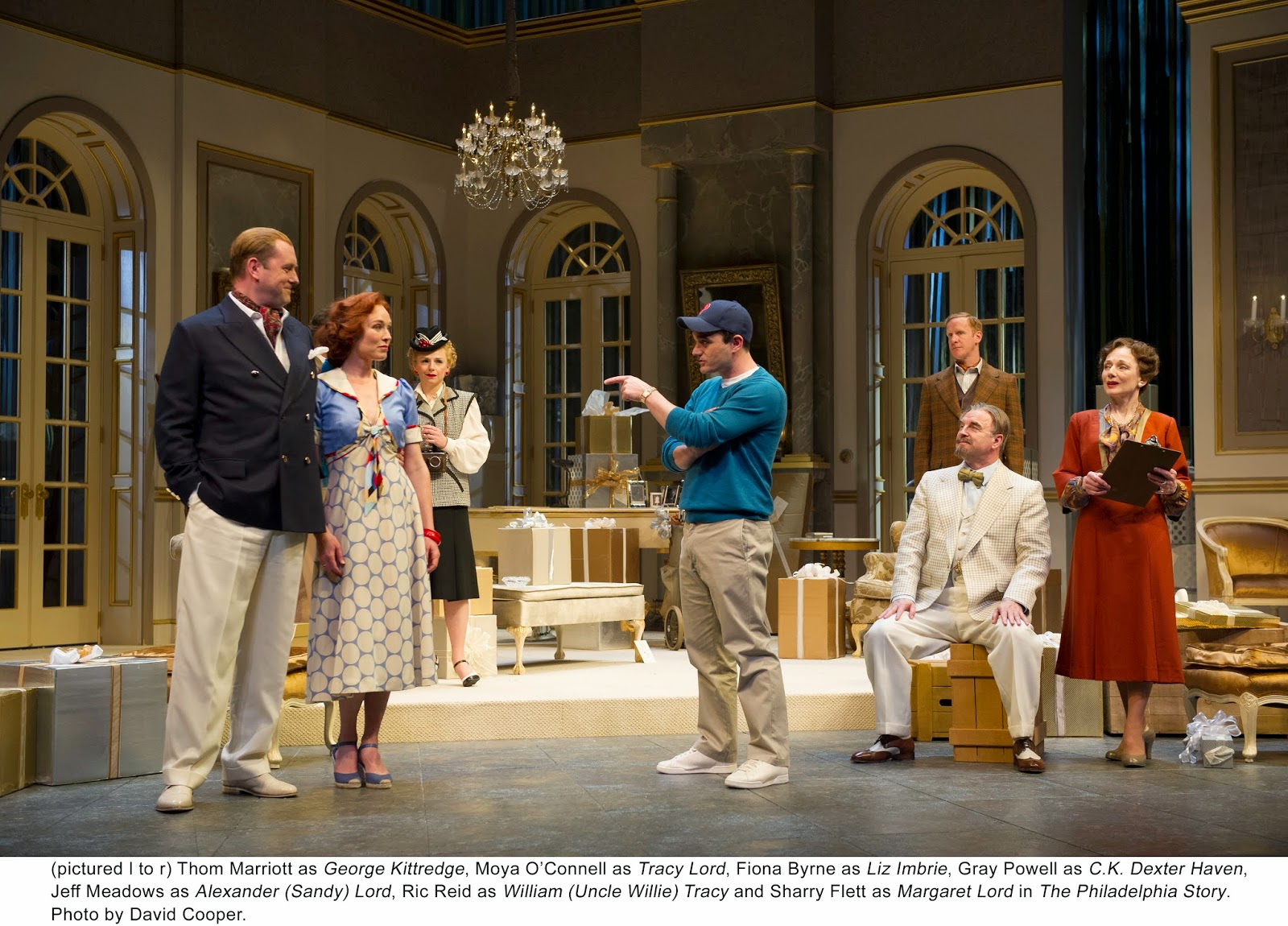 The lives of the rich hold a great fascination for most people, especially for Americans. The United States is perhaps the only nation in the world that has the acquisition of wealth enshrined in its Declaration of Independence as a God-given, unalienable right. When they say “Life, Liberty and the pursuit of Happiness,” you can be sure that the last word does not mean merely spiritual contentment.

What better subject for a play than a glimpse at how the wealthy live and marry peppered with mild satire and a great deal of laughter. That is what The Philadelphia Story by Philip Barry offers and the play gets a fine production by the Shaw festival.

The focus of the play is the loaded and slightly eccentric Lord family of Philadelphia where the beautiful Tracy (Moya O’Connell) is about to marry her second husband.

When the curtain is raised we see a spacious and gorgeously furnished room designed by William Schmuck. This is what money can buy if you are rich or have a good set designer.

Before the wedding ceremony is performed we are provided with laughter by the eccentricities of the Lords, the surprise arrival of Tracy’s father Seth (Juan Chioran) who is busy with his mistress, the presence of Uncle Willie (Ric Reid) who is busy with his hands and the arrival of Mike Connor (Patrick McManus) and Liz Imbrie (Fiona Byrne) who are on a secret mission to cover the wedding and report on the rich.

The catalyst for action is Tracy’s little sister Dinah (Tess Begner) who is conspiring to wreck the upcoming wedding to Kittredge (Thom Marriott) and restore Tracy’s first husband Dexter (Gray Powell) as her spouse.

The central character is Tracy, the virgin goddess, the spoiled brat, the young woman looking for her identity, the beautiful woman looking for love. Take your pick.  O’Connell glides and twirls around the stage gracefully and seductively.

She got cold feet and eloped with Dexter, her first husband, two years ago but he is still very much around. Gray Powell is not terribly convincing as the romantic hero who swept Tracy off her feet once and may do so again. The wardrobe department should have another look at his outfits but that is not the major problem.

The competition is represented by Kittredge and Thom Marriott has an easier job than Powell as the big hulk who may know a lot about business but does not have a romantic bone in his body.

McManus and Byrne make an entertaining couple as Mike Connor, the reporter who really wants to be a writer and the smart and sarcastic photographer Liz.

Director Dennis Garnhum does not miss any beats except for the items mentioned above.  The sizable cast is rather uneven but the laughs do come in and the production does make for a fun evening at the theatre.
______

The Philadelphia Story  by Philip Barry continues until October 25, 2014  at the Festival Theatre, Niagara-on-the-Lake, Ontario. www.shawfest.com.
Posted by James Karas at 1:27 AM