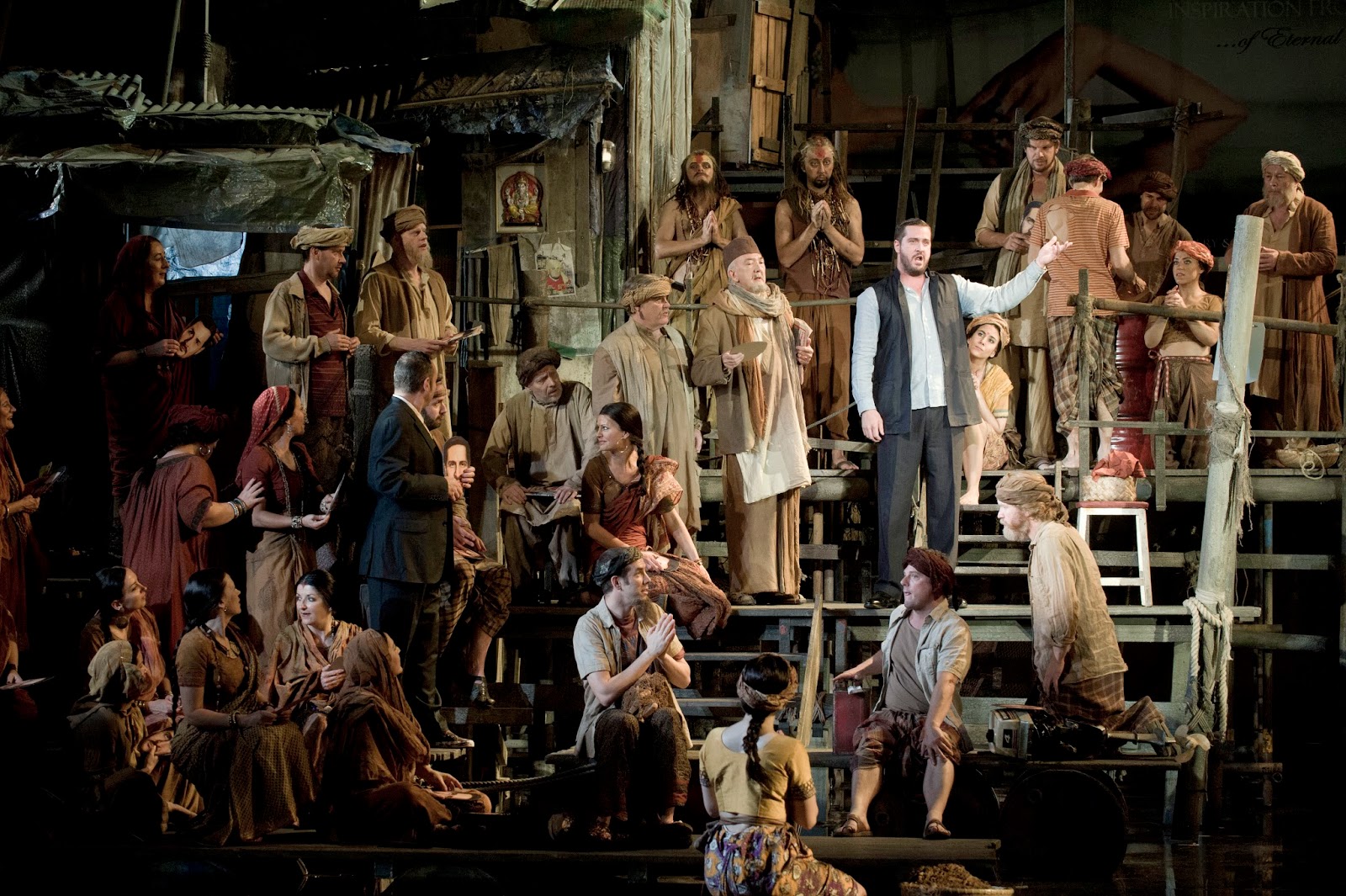 “There were neither fishermen in the libretto nor pearls in the music” was journalist Benoit  Jouvin’s sarcastic comment when he saw Bizet’s The Pearl Fishers.

Director Penny Woolcock and Set Designer Dick Bird disagree emphatically with that comment. In their production for the English National Opera at the London Coliseum, they have gone out of their way to prove that there are indeed fishermen in the opera and you can see them under water looking for pearls. There is no lack of musical pearls either, Jouvin’s assessment notwithstanding.

The Pearl Fishers requires only four singers aside from the chorus and the ENO production has fairly good luck with the young performers at hand. Soprano Sophie Bevan does a very creditable job as Leila, the Priestess of Brahma. She is loved by two men who have sworn to keep their hands off her. She has some fine duets with them. The plot calls for her to wear a veil for much of the time and that is unfortunate.

Baritone George von Bergen plays Zurga, the man who gets elected dictator in the first three minutes of the opera. His life was saved by Leila and he is in love with her. Von Bergen has a good, resonant voice and he exuded authority as the chief honcho of the village.

Canadian tenor John Tessier sings Nadir (and gets the girl because he is a tenor). He has a supple and well-honed voice and his Nadir is quite convincing. Bass Barnaby Rea is the High Priest Nourabad, a relatively minor role but he does get to show off his low notes.to good effect.

Bizet provides some fine and showy music for the chorus and the ENO singer take full advantage of it.

The real success of the production lies in the work of Woolcock and Bird. The opera is set on the coast of Ceylon and you may expect an expanse of sandy beach with blue sea stretching to the horizon. Woolcock takes a dimmer and darker view of the opera. When the curtain goes up, the stage of the Coliseum looks like the bottom of the sea, dark and forbidding. There are divers in the water and the sky above is threatening. The coastal village consists of shacks.

We will see the divers, the billowing and menacing waves, and the poor village again. This is no coastal paradise. Religion or indeed superstition is the guiding principle of the lives of the fishermen who seek protection from the elements.

Woolcock has come up with a bold interpretation of the opera. The force and violence of the ocean is projected on a large screen, indeed for several minutes the entire height and width of the stage is taken up by a black-and-white video of surging waves. The sky is equally hostile and an entire life cycle is created for the pearl fishers.

The love triangle gains depth by not being set against an azure beach. In the final scene, Zurga sets the entire village on fire in order to avoid having to execute Nadir and Leila. This act of extreme violence fits with Woolcock’s view of the opera as inhabiting a world of elemental forces rather than a love triangle on the beach. In the final scene, we see women carrying their dead children following the torching of their homes.
A memorable production of an infrequently seen opera.
_____