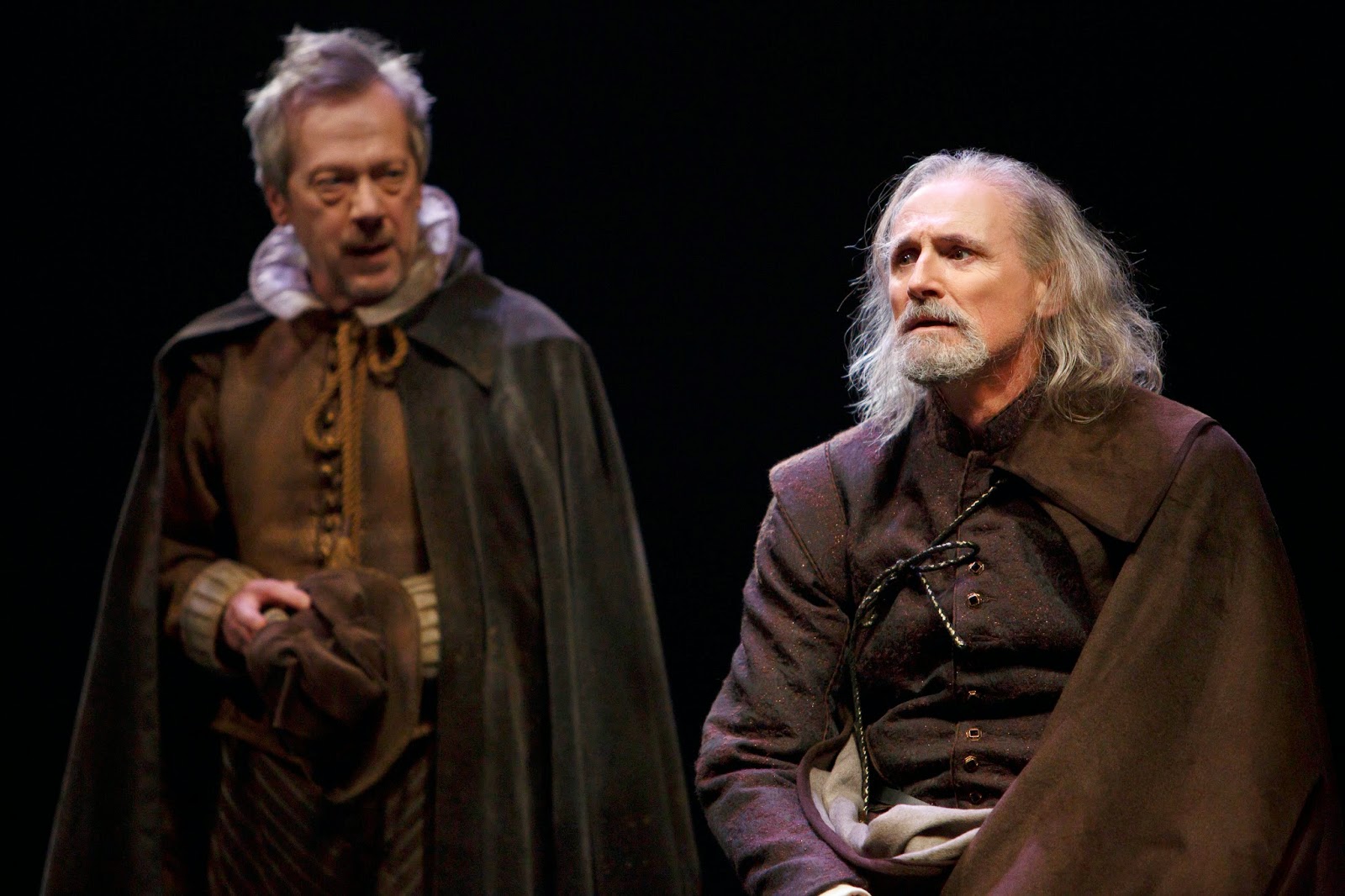 As the storm rages in King Lear at the Stratford Festival, the house lights go on to indicate the intermission. When the performance begins again, the storm continues with dramatic thunder and lightning, fog on the stage floor and highly effective lighting. King Lear (Colm Feore) begins raging against the elements in his famous challenge to nature to “Blow winds, and crack your cheeks! Rage, blow.”

It is a titanic scene on a scale reminiscent of Prometheus bound on the rock defying the gods. Unfortunately Feore’s performance lacked the depth and breadth that one hoped to find in the production directed by Antoni Cimolino. Feore has a tenor voice that simply lacked to depth and resonance to make his rage against the elements convincing. Everything about he scene was done well except for the most important element, that of Feore’s delivery of the monumental lines.

Kent (Jonathan Goad), Lear’s faithful follower, is loyal to the king because he sees authority in his countenance. There is no authority in Feore’s Lear. We do not see the powerful, dictatorial and commanding King demanding expressions of love from his daughters and dividing his kingdom on the base of their performances.

Cimolino sets the production in Elizabethan England and there are some benefits in that. We are in fairly familiar territory with no need to evoke some primitive English milieu or place it in modern times.
Evan Buliung has an innocent and wholesome look about him and he made a perfect Edgar, the decent son who is disinherited by Gloucester based on the lies of the perfidious Edmund.

Brad Hodder, dressed in black with short-cropped hair, delivers an understated Edmund but you realize that the bastard son of Gloucester is not just evil; he is a psychopath. Playing a truly nasty character is not quite Mike Shara’s milieu but Cimolino gives him a fighting chance as Cornwall. The blinding of Gloucester is always tough to stage and Cimolino handles it well. Shara as Cornwall takes out a dagger and lunges towards Gloucester. He stops before he stabs his victim, pulls back, gives a gleeful laugh and then gouges Gloucester’s eye. Cornwall is a sadist and Cimolino demonstrates it very effectively.

Lear’s evil daughters, Goneril (Maev Beaty) and Regan (Lisa Repo-Martell) wear Elizabethan gowns becoming to royals. The problem with that is that the gowns make them look like ladies of the court rather than warriors. They are more martial than courtly but Beaty’s and Repo-Martell’s characterization goes somewhat in the opposite direction.

Stephen Ouimette gives us a solid Fool. No acrobatics or histrionics and no Fool’s paraphernalia which at times can be tiresome. He is a “serious” and very good Fool.

Scott Wentworth is a fine if somewhat lightweight Gloucester. He is in the same range as Feore’s Lear. Cimolino does a good job in staging Gloucester’s jump off the cliffs of Dover. Rather than pretending that by rolling down a few feet he will believe he fell down the cliff, Wentworth simply falls backward. It works and is a nice directorial touch.

Cimolino does not go for extraordinary flights of fancy in his productions but prefers to be faithful to the text and give us solid, well-done stagings. That is to his great credit. This King Lear has all those hallmarks but in Feore he did not have a Lear who could do justice to the great role.
In fairness, I should mention that the production in general and Feore in particular got a standing ovation. See it and spread your opinions.
______

King Lear by William Shakespeare opened on May 26 and will run in repertory until October 10, 2014 at the Festival Theatre, Stratford, Ontario. www.stratfordfestival.ca
Posted by James Karas at 11:35 PM