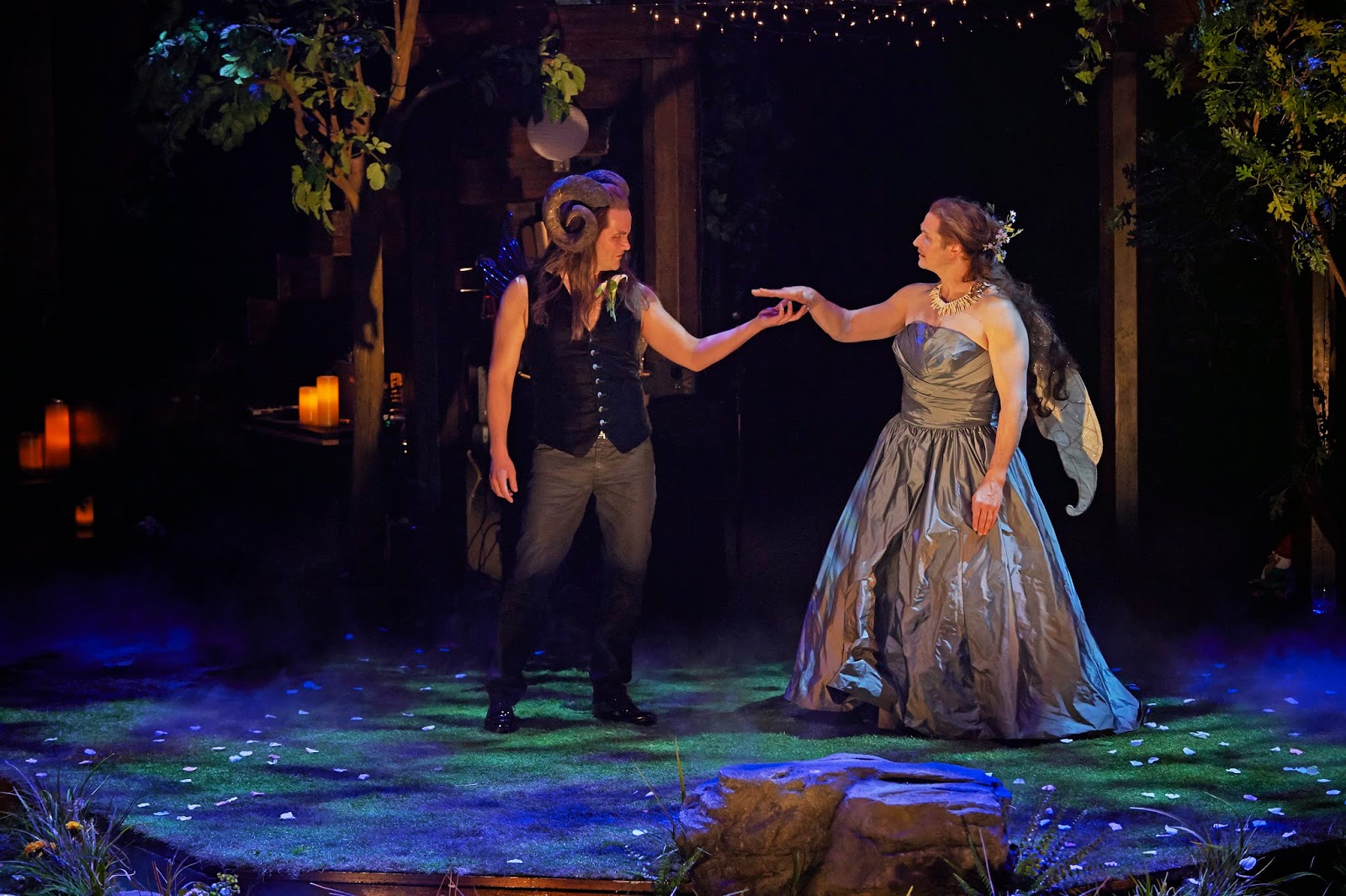 The only Shakespearean comedy offered at the Stratford Festival this year is A Midsummer Night’s Dream directed by Chris Abraham. The production garnered a lot of cheers and laughter from the totally unreliable opening night audience but I found it a pretentious, over-the-top directorial ego trip that served Shakespeare and the audience badly.
Abraham never saw trick that he did not include in this production, an adlib that he did not allow, overacting that he did not encourage, and just about anything that will turn a great comedy into a travesty.
As the audience filed into the Festival Theatre, we saw members of the cast milling on the stage and mingling with the audience. When the performance started we saw a wedding scene where two men are getting married. The words “Let me not to the marriage of true minds/
Admit impediments” are spoken. The lines are from a Shakespeare sonnet but what is a gay wedding doing in this play? Stay tuned.
Can you keep the lovers in Midsummer straight? Well, Hermia (Bethany Jillard) is in love with Lysander (Tara Rosling) but her father Egeus (Michael Spencer-Davis) wants her to marry Demetrius (Mike Shara). Helena (Lisa Repo-Martell) is in love with Demetrius. Abraham has decided that Egeus is deaf and communicates with sign language. No doubt there was a reason for giving Egeus this disability but to some of us it looks just plain dumb.
It quickly becomes apparent that Lysander is really Lysandra and even to someone as thick as Demetrius (and Shara does make him look thick) should realize that Hermia is in love with another woman and the idea of having a relationship with him is rather unlikely. Titania, the Queen of the Fairies (Evan Buliung) in a bridal gown is played by a man and Oberon (Jonathan Goad) goes around with the horns of a ram hairdo. Buliung and Goad exchange roles on different nights and it is difficult to choose who looks more ridiculous.
Abraham may want to score political points even with Shakespeare but interpolating a gay wedding in Midsummer does not work, to put it politely. Gay marriages are old hat in Ontario (thank God) and Abraham may have steered away from the subject to better effect.
Abraham wants to jazz up Shakespeare’s humour by allowing the actors to adlib. When Oberon, the King of the Fairies, falls in a pool of water on stage he adds that “I am a flyer and not a swimmer.” There are numerous such additions to the dialogue and they are out of place and not funny. 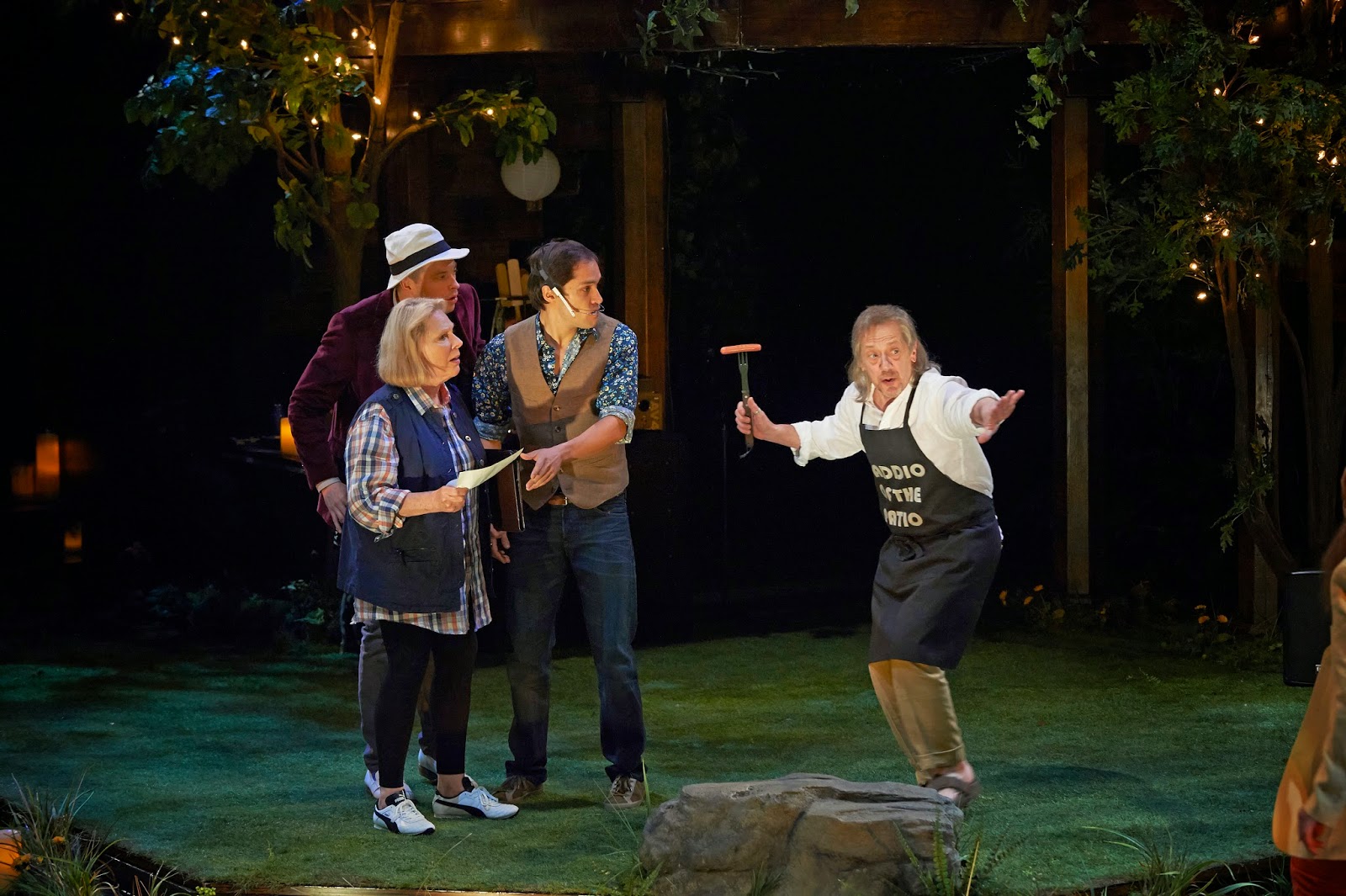 From left: Lally Cadeau as Quince, Brad Hodder as Starveling, Karl Ang as Snug and Stephen Ouimette as Bottom. Photo by Michael Cooper.
The artisans should have us rolling in the aisles with laughter and here Abraham is a bit more successful. Lally Cadeau plays a Quince that should be getting Old Age Security, Stephen Ouimette is an irrepressible Bottom.  Just give him a copy of the play and leaving alone. He will do a god job despite the directing. Victor Ertmanis as Flute, Karl Ang as Snug, Keith Dinicol as Snout and Brad Hodder as Starveling carry or are carried by Shakespeare to good effect.
If you want easy laughs, you put cute children to play the roles of the fairies. There are sexual innuendos when the fairies are entertaining Bottom and Abraham wisely steers away from any impropriety but do we really need this?
Abraham clearly has the imagination and ability to direct a stupendous Midsummer Night’s Dream. He needs to try less hard. Overacting by the bushel, tricks by the barrel, infidelity to the text, attempts to improve Shakespeare and overreaching to score an unnecessary political point or show originality, all add up to a very bad night at the theatre.
______

A Midsummer Night’s Dream by William Shakespeare opened on May 31 and will run in repertory until October 11, 2014 at the Festival Theatre, Stratford, Ontario. www.stratfordfestival.ca
Posted by James Karas at 4:53 PM