A great production of a great musical.

That is a succinct review of The Glimmerglass Festival production of West Side Story directed by the Festival’s Artistic Director Francesca Zambello. It is a co-production with the Houston Grand Opera and the Lyric Opera of Chicago and one can fairly say that she pulled out all the stops and the result is triumphal. 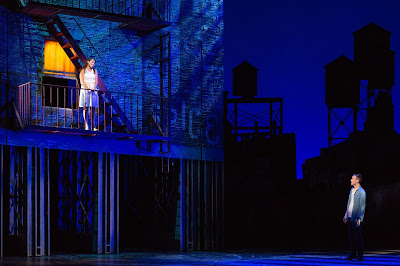 Vanessa Becerra as Maria and Joseph Leppek as Tony in "West Side Story."
Photo: Karli Cadel/The Glimmerglass Festival
She has a great work to work with. West Side Story has a masterful score by Leonard Bernstein with lyrics by Stephen Sondheim and book by Arthur Laurents. That is three theatrical geniuses combining forces to bring an adaptation of Shakespeare’s Romeo and Juliet to Broadway in 1957. Jerome Robbins’ choreography remains extraordinary and unsurpassable. This is no pleasant dancing but an integral part of the plot that not only adds dramatic punch to the story but is an essential part of it. Remove the dancing and you have caused irreparable harm to the musical.

The original choreography is reproduced by Julio Monge. The scenery by Peter J. Davison and the costumes by Jessica Jahn show the seedy side of New York and the clothes worn by gang members, as far as we can tell. They do the job superbly.

West Side Story needs talented principals like Tony, Maria and Anita, and the main members of the two gangs and this production has them all. Aside from the love plot between Maria and Tony and the effervescent Anita, the musical is an ensemble performance because it is the portrait of two social groups at war. Who are they? Open the news and you will find them in most corners of the great United States. In this case they are Puerto Ricans and “real Americans” for which read white bigots. 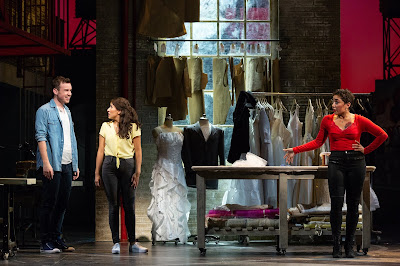 Joseph Leppek as Tony, Vanessa Becerra as Maria and Amanda Castro as Anita in
"West Side Story." Photo: Karli Cadel/The Glimmerglass Festival
Vanessa Becerra as Maria has a ringing voice and shows emotional intensity of the highest order. Tony (Joseph Leppek) is man in love with the voice and the passion to show it. The gang members do dance routines that are athletic, perfectly timed and executed with dramatic power and marvelous passion. Amanda Castro makes the perfect insouciant recent immigrant who is full of optimism but can tell the difference between a dream and a daydream.

The “adults” of the show are the very sympathetic Doc (Dale Travis) and the cops, Lieutenant Schrank (Zachary Owen) and Officer Krupke (Maxwell Levy) who are perhaps exactly how we imagine police officers.

David Charles Abell conducts The Glimmerglass Festival Orchestra bringing out Bernstein’s wonderful songs and music to an audience that seemed to be thrilled by every note.

A magnificent night at the theatre.
______________
West Side Story by Leonard Bernstein (music), Stephen Sondheim (lyrics) and Arthur Laurents (book) is being performed thirteen times between July 7 and August 24, 2018 at the Alice Busch Opera Theater, Cooperstown, New York. Tickets and information (607) 547-0700 or www.glimmerglass.org
Posted by James Karas at 12:09 PM