THE BARONESS AND THE PIG – REVIEW OF 2018 SHAW FESTIVAL PRODUCTION

Noblesse oblige imposed a heavy burden on the wealthy aristocrats of yore. It was a self-imposed moral obligation to help the poor or lower classes but its extent was undefined. The main beneficiaries of this munificence were the aristocrats themselves because it enhanced their moral superiority and it certified that their wealth and status were the well-deserved gift of God.

That is the thought that went through my mind as I watched Michael Mackenzie’s The Baroness and the Pig at the Shaw Festival. 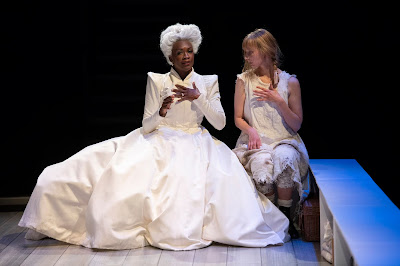 Yanna McIntosh as Baroness with Julia Course as Emily in
The Baroness and the Pig. Photo by David Cooper
The Baroness is a French aristocrat and the play takes place in Paris in the 1880’s. After losing three maids in succession, she is looking for a third one and comes up with a brilliant, indeed, enlightened, idea. She will find a pure human being who is untouched by society and educate her. Let’s be more precise. She will fulfill her noblesse oblige and train the creature to be a servant. She must learn the usual duties of a servant and be pretty.

The Baroness finds a teenager who was brought up in a pigsty without human contact. She names the girl grandiosely Emily after Jean-Jacques Rousseau’s Émile. The play opens with the encounter between the Baroness and Emily. Yanna McIntosh as the Baroness is a statuesque aristocrat dressed in a fashionable white gown and wearing a white wig. She exudes stature and status as she undertakes the task of educating Emily – to be a servant. As it becomes an aristocrat, the Baroness almost never loses her composure.

Emily, played by Julia Course, crouches on the floor, tumbles, speaks in garbled words and is barely human. Course has her work cut out in slowly progressing from a completely unsocialized human being to someone gaining some comprehension and beginning to fulfil the Baroness’s ambitions for her. 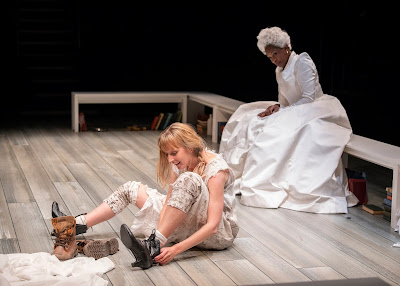 Julia Course as Emily with Yanna McIntosh as Baroness in
The Baroness and the Pig. Photo by Emily Cooper
The play is produced in the Jackie Maxwell Studio, a theatre in the round which limits the possibility for props and sets. The playing area has white benches on the perimeter and there are a few props available. Camellia Koo is the production’s designer with Kevin Lamotte designing the lighting.

The transformation of Emily moves slowly and haltingly and at times the play appears to be running put of steam. Mackenzie however has inserted almost insidiously a subplot that adds to the subtext of the play and rounds off the plot development in an unexpected way. To disclose anything more, would spoil the plot that needs to be seen and enjoyed.

McIntosh’s and Course’s strong performances keep the play going even when the plot gets weak. Kudos to director Selma Dimitrijevic for keeping tight control of the action.

The Baroness’s ambition from the start was, as I said, to fulfill her moral obligations as an aristocrat and train a maid. She also wanted to impress her friends. I wonder if she did.
_____
The Baroness and the Pig by Michael Mackenzie continues in repertory until October 6, 2018 at the Jackie Maxwell Studio, Niagara-on-the-Lake, Ontario. www.shawfest.com.
Posted by James Karas at 1:28 AM