Bernard Shaw was a master of turning the tables around on a subject or using irony as a comic tool. O’Flaherty V.C. is a one-act play that he wrote in 1915 and he subtitled it A Reminiscence of 1915 (A Recruiting Pamphlet). Needless to say it was nothing of the sort.

The play takes place in an Irish country house where we meet Private O’Flaherty (Ben Sanders) who has been awarded that rare recognition for extraordinary bravery and service to the British Empire, the Victoria Cross medal. He is a hero and his landlord, General Sir Pearce Madigan (Patrick McManus) is parading him through the Irish countryside to persuade more Irish boys to enlist. 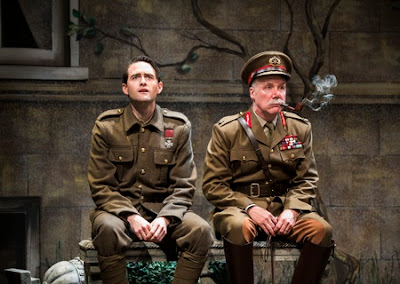 Ben Sanders as O'Flaherty and Patrick McManus as General Sir Pearce Madigan
in O'Flaherty V.C. Photo by Emily Cooper
Now for the surprises. O’Flaherty is no hero. He is just an ordinary chump who was more afraid of running away than of fighting. And that’s just the beginning of the shocks that the cartoon recruiting and Irish estate-owning General is about to get.

O’Flaherty’s mother who raised the General’s children and is a patriotic Irish woman does not know and would never allow her son to fight for the British. She thinks he is fighting for the French and the Russians who would never fight with the English. She draws her own conclusions.

The play provides a marvelous joke and a bitter satire on war and patriotism. Sanders is splendid as the young innocent who goes to a war that he knows nothing about. He has the Irish lilt and the cunning, intelligence and innocence to make an attractive character. He was a thief as a young man and explains his conduct to the General simply. His mother sold her geese to pay her rent to the General. He stole the General’s geese to pay for the rent.

Tara Rosling is the tough, no-nonsense mother who bought bottled milk for her infant but nursed the general’s daughter. She prays for the conversion of the General and cuffs her son’s ears on a regular basis. Quite a woman and a fine performance by Rosling. 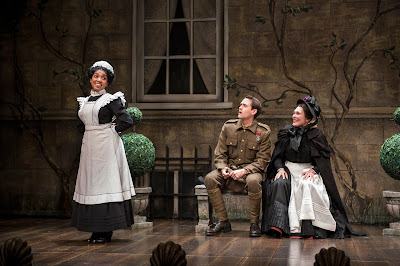 Gabriella Sundar Singh as Teresa, Ben Sanders as O'Flaherty and Tara Rosling
as Mrs. O'Flaherty. Photo by Emily Cooper
McManus as the general is the pipe-smoking Central Casting, as they used to say, English officer. He shocked, just shocked at O’Flaherty’s conduct and his mother’s attitude. Everyone is loyal and patriotic, no? NO.

The servant Teresa (Gabriella Sundar Singh) is another tough Irish woman with plans of her own. She sees an opportunity in the new hero. She gets into a fight with Mrs. Flaherty and delivers some marvelous insults. In the end, O’Flaherty V.C. does turn out to be, in a Shavian ironic way, a recruiting pamphlet. Go see it to figure out how.

Director Kimberley Rampersad sets a perfect pace with terrific performances and gives us a delightful 45 minutes of theatre during lunch time.
_____