THE ORCHARD (AFTER CHEKHOV) – REVIEW OF 2018 SHAW FESTIVAL PRODUCTION

There are many reasons for producing The Orchard (After Chekhov) at the Shaw Festival during the current season. It is a first play by a Canadian writer and that’s worth several solid points. It is about immigrants and their integration under the policy of multi-culturalism enunciated by former Prime Minister Pierre Eliot Trudeau and it salutes native Canadians. What more do you want?

The “more” (and perhaps “less”) is suggested by the title. Sarena Parmar has found a short cut to inventing a plot and characters by borrowing them from Anon Chekhov’s 1903 play The Cherry Orchard.  She transplanted Mrs. Ranevskaya’s orchard from provincial Russia at the turn of the twentieth century to British Columbia’s Okanagan Valley in 1975 taking most of the characters along. 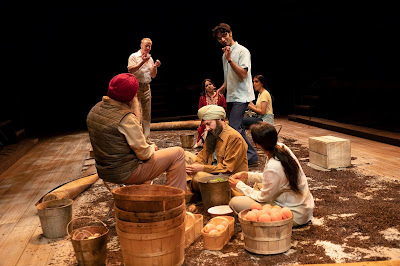 The cast of The Orchard (After Chekhov). Photo by David Cooper.
In Chekhov, the aristocratic order represented by Mrs. Ranevskaya is in decline and a new class is coming up. It is the end of Tsarist Russia. In Parmar’s play, the people are immigrant Sikhs from Punjab, India who, like their Russian counterparts, are on the verge of losing the orchard and I suppose their way of life.

The immediate cause for the loss of the estate is simply bad management. Mrs. Ranevskaya has been living extravagantly in Paris for five years and is left penniless. Loveleen (the name is a loose translation of Ranevskaya’s first name Lyubov), the owner of the Okanagan estate has been living in Bombay with a user and spends whatever money is left for her return ticket to Canada.

Loveleen (Pamela Sinha) is a beautiful and classy woman. One can’t say that she has mismanaged the estate, because she has not managed it at all and maybe she is just plain stupid. The mortgagee is about to foreclose and the estate is going on the auction block and she can’t quite grasp the situation. But she is always lovely.

Loveleen has a large family and friends. Like all immigrants, they are facing the issue of maintaining the culture of the “old country” and integrating into the new way of life. As Sikhs, some of them have the additional problem of being highly visible and having to choose between turban-and-beard and clean-shaven and hair-cut. Her niece Barminder (Krystal Kiran) has converted to Christianity and speaks of becoming a nun. Talk abou assimilation. 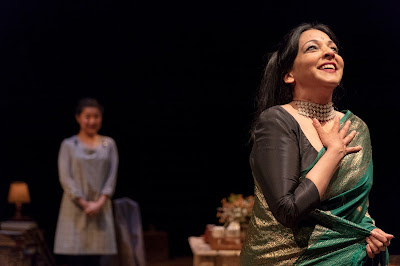 Pamela Sinha as Loveleen with Rong Fu as Donna in The Orchard (After Chekhov).
Photo by David Cooper.
Her daughter Annie (played by the author) is a beautiful and intelligent woman who speaks English without an accent (just about all of them do) and survival and success in the host culture should be relatively easier if her mother knew some arithmetic when she was blowing the family farm.

The “Canadian” representatives are Paul (Neil Barclay), a genial neighbour who is broke and Michael (Jeff Meadows) a local shyster who acts (and overacts) like a clown but has his eye set on grabbing the orchard. No he is not a lawyer, just a local businessman rising from the bottom.

Kesur (David Adams) is the turbaned and bearded father of Loveleen and represents the old country, I suppose, and Gurjit (Sanjay Talwar) is Loveleen’s brother who meets the reality of looking “different” and searching for a job.

The plot and the characters are grafted one way or another from Chekhov but the major themes do not take to the Canadian environment as well as one might wish. The sale by auction of the Okanagan cherry orchard and the premise of the whole play are not convincing as the decline and fall of immigrants from Punjab.

The production is directed by Ravi Jain and the play was dramaturged by Guillermo Verdecchia. It presents an interesting idea that should resonate with immigrants and “locals” and again kudos for the choice of play for the reasons enumerated at the beginning of this review.
_____

The Orchard (After Chekhov) by Sarena Parma continues in repertory until September 1, 2018 at the Jackie Maxwell Studio, Niagara-on-the-Lake, Ontario. www.shawfest.com.