THE BARBER OF SEVILLE – REVIEW OF 2018 GLIMMERGLASS FESTIVAL PRODUCTION

The Glimmerglass Festival is in full swing in upstate New York, near Cooperstown where you have to (pretend) to like baseball as you enjoy civilized offerings of operas and other events including a talk by Margaret Atwood. Put a baseball cap and a baseball in your car as a precaution, (pretend to) visit the Baseball Hall of Fame and then go to the gorgeous setting of the Alice Busch Opera Theater.

This year four major operas are offered displaying Artistic and General Director Francesca Zambello’s eclectic tastes. The ever-popular Barber of Seville is this year’s chestnut in a new production directed by Zambello. Leonard Bernstein’s West Side Story brings a classic American musical on the 100th anniversary of the composer’s birth. 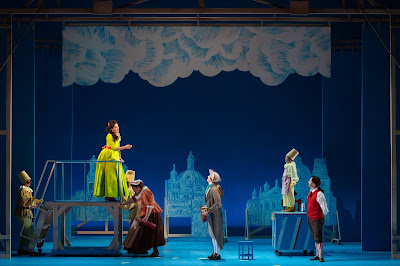 L to R: Emily D'Angelo asRosina, Alexandria Shiner as Berta, David Walton as Count Almaviva,
Rock Lasky as Figaro's Assistant and Joshua Hopkins as Figaro in The Glimmerglass Festival's 2018
production of Rossini's "The Barber of Seville." Photo: Karli Cadel/The Glimmerglass Festival
This year is also the 100th anniversary of the end of World War I and the occasion is marked with a production of Silent Night by Kevin Puts. The opera is about the Christmas truce of 1914, an event on the Western Front, where soldiers temporarily stopped killing each other in Belgium.


With the fourth opera we tread on less familiar ground with Leos Janacek’s The Cunning Little Vixen. There are also productions of Ben Moore’s Odyssey and Leonard Bernstein’s Trouble in Tahiti.

Zambello gives The Barber of Seville a fresh reading presenting it as a fun chamber piece with minimal sets and a maximum of fine singing and comedy. Toronto baritone Joshua Hopkins led the cast as the virile, agile and clever Figaro. He sang superbly from the machine-gun paced ‘Largo al factotum’ through all the shenanigans that his character devises.

Toronto mezzo soprano Emily D’Angelo sang a delightful, expressive and thoroughly enjoyable Rosina. For her first big number, ‘Una voce poco fa,’ she was carried onto the stage lying on a couch and she delivered Rosina’s credo of determination and spunk mostly while seated. She would be better off standing and moving to illustrate her strength. But aside for that minor point, D’Angelo used her richly-toned mezzo voice to splendid effect and she made a Rosina that we are delighted to hear and see.

American tenor David Walton sang a spry Almaviva. He had a few bad patches but otherwise his singing was splendid for the role of the passionate and resourceful lover.

American bass-baritone Dale Travis sang well and was very funny as the foolish Doctor Bartolo. Timothy Bruno as Don Basilio, Ben Schaefer as Fiorello and Alexandra Shiner  as Berta are all from the Glimmerglass’s Young Artists Program and deserving of recognition and praise for their fine performances.

The opera is played against a turquoise background with moveable panels to indicate the scenery. The style is simple and quick, perhaps vaudeville style where placards give information such as a banner with word storm on it tell you that there is a storm. There is no balcony for Rosina but a moveable ladder is wheeled on the stage for her to stand on. When a window is required, a cardboard with a square hole is brought on. John Conklin is the designer. An original approach that combines the traditional and the modern and works exceptionally well. 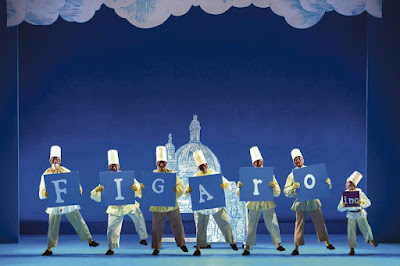 Members of the ensemble in The Glimmerglass Festival’s 2018 production of Rossini’s
The Barber of Seville.’Photo: Karli Cadel/The Glimmerglass FestivalMembers
Zambello proves imaginative and astute in her desire to emphasize the humour of the opera. And she is successful. When Zambello greeted the audience before the performance, she told us that the price of a ticket covers only one half the cost of a seat. At that point she produced a chair cut in half to illustrate her point. When Bartolo wants to sit down, he is given the same half chair to general laughter.

A marvelous evening at the opera.

Oh, yes. If you are a genuine baseball fan that is far more versatile than me and love opera, I have it on good authority that you can bring and even wear your baseball hat on the lawn of The Alice Busch. I have not examined the consequences of actually wearing the hat in the theatre. I am seeking an exemption for Blue Jays hat wearers as a gesture of our special relationship.
_____

The Barber of Seville by Gioachino Rossini (music) and Cesare Sterbini (libretto) is being performed eleven times between July 14 and August 25, 2018 at the Alice Busch Opera Theater, Cooperstown, New York. Tickets and information (607) 547-0700 or www.glimmerglass.org