Coriolanus is not one of Shakespeare’s great plays but it has carved a niche for itself in the canon and has attracted some great actors to the main role. Whatever its shortcomings, the current production at the Stratford Festival should rank as one of the finest stagings ever. The reason is Robert Lepage who directs it at the Avon Theatre.

In a movie the camera zeroes in on the speaker or the scene that the director wants to emphasize. We get a clear view of what the director considers important because he focuses on it in ways that are available in a movie but not necessarily or at all in live theatre. Lepage uses multiple screens where necessary and there is rich and brilliant use of projections. 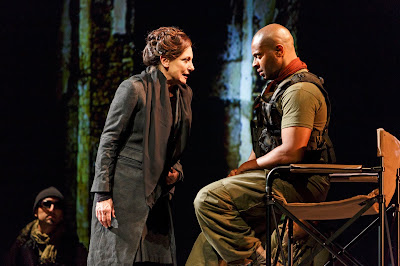 Lucy Peacock as Volumnia and André Sills as Coriolanus in Coriolanus.
Photography by David Hou.
Lepage uses modified cinematic techniques to grab our attention in a live performance. If the camera cannot focus on a speaker as it would in a film, Lepage blocks our view of the rest of the scene except for the character or characters he wants us to see. This occurs throughout the performance and we get the impression that we are watching a fine film rather than a traditional live performance. It is an astounding experience of an extraordinary production.

The play is given a modern setting with scenes in a television studio where people are interviewed as if they are on, say, CNN. There are scenes in ordinary offices, in bars and in exterior settings as well. This establishes a smooth change of scenes that works, again, as if we are watching a movie where there is a simple fade out as we are led to the next scene.

I hasten to add that Lepage who designed the sets as well as directing the play, is not solely responsible for the production and recognition and kudos are deserved by Steve Blanchet  as the Creative Director and Designer, to Costume Designer Mara Gottler, Lighting Designer Laurent Routhier and Images Designer Pedro Pires. Along with Lepage’s conception of the play, they added enormously to the project to make the production simply extraordinary.

There are some powerful performances that go along with Lepage’s conception of the play. Andre Sills is a powerful Coriolanus and much of the problem of the play lies in trying to understand him. He is a warrior and perhaps a killing machine. He has saved Rome from her enemies and the patricians want to reward him with the position of consul, the top civilian job, but Coriolanus has trouble with people in that he holds the lower orders in contempt. He is not willing to play the political game of making a speech, appealing to the masses and going on with the job. He may well be seen as a dictator who despises the mob. 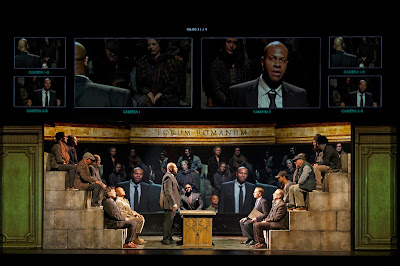 Members of the company in Coriolanus. Photography by David Hou.
I prefer a different view that goes back to the heroic ethos of the Iliad and the Odyssey. The Greek heroes fought for kleos, meaning glory or renown. Achilles was indeed a killing machine from one point of view (he is humanized in the end) but his goal was bravery and death in battle that brings kleos to him. Hector left his wife and child despite Andromache’s pleading, to go into battle and face almost certain death for kleos. Coriolanus may come from the same ethos that we find illogical and unacceptable today. Sills will convince you of Coriolanus’s martial prowess and passion.

Coriolanus has an enemy that is almost equal to him. Achilles needs Hector and Coriolanus needs Aufidius. Graham Abbey is superb in the role showing the determination and warrior mentality to challenge Coriolanus.

Coriolanus’s warrior code comes directly and quite obviously from his mother Volumnia. Lucy Peacock is just the actor to play this powerful matriarch and she almost steals the show. She has the perfect vocal intonations to command, persuade, cajole and give us a memorable Volumnia.

Tom McCamus plays the role of Menenius, the man of reason and decency and, as usual, he is terrific. Stephen Ouimette, cane in hand and Tom Rooney play the tribunes and only praise will do for them.

An unforgettable production.
______________
Coriolanus by William Shakespeare continues in repertory until October 20, 2018 at the Avon Theatre, 99 Downie St, Stratford, ON N5A 1X2. www.stratfordfestival.ca