THE HOUND OF THE BASKERVILLES – REVIEW OF SHAW FESTIVAL PRODUCTION

The Shaw Festival has produced Sir Arthur Conan Doyle’s The Hound of the Baskervilles as adapted for the stage by R. Hamilton Wright and David Pichette.

It is advertised as a “CANADIAN PREMIERE! It’s the return of the murder mystery to The Shaw.” Wright and Pichette are American actors who adapted the famous novel for the stage in 2013 and even if it is the first time that it is produced in Canada, it hardly rates a mention let alone in capitals and an exclamation mark as a premiere. Murder mysteries may be crowd pleasers and theatre fillers and those are potent arguments for inviting over Sherlock Holmes. 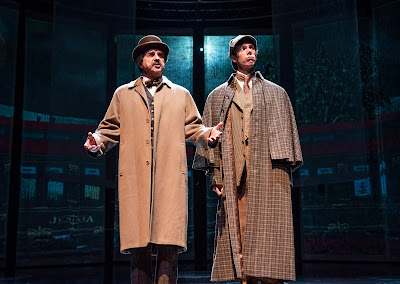 Call Sherlock Holmes and give the job to Damien Atkins to deliver him in the Festival Theatre. We all know that he is a genius – Holmes that is, Atkins is a good actor, and may also be a genius. He can deduce and recite more facts about someone at a glance than mere mortals can gather in a month of Sundays and a credit check. Director Craig Hall is not happy with that and he gives us a Sherlock who is a bit of a clown which I found incongruous.

Dr. Watson (Ric Reid) is no fool at detection work but he cannot compete with the master. In the Baskerville mansion, we find Barrymore the butler (Patrick Galligan) and his wife (Claire Jullien) as well as her brother, a convicted and escaped murderer! The new owner of the estate is Sir Henry Baskerville (Kristopher Bowman) who lived in the province of Alberta before it became a province but please do not bother me with historical facts.

We meet the neighbours and we suspect no one, but, everyone is a suspect. Beryl Stapleton (Natasha Mumba), Jack Stapleton (Gray Powell), Mr. Frankland (Cameron Grant) and the Hound. Well, we don’t meet the hound but we do see him projected on the screen and as a puppet. And we suspect him too. Dr. Mortimer (Graeme Somerville) is the first to suspect foul play and brings in Holmes to the job. 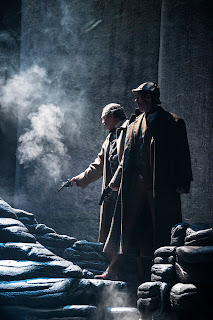 Ric Reid as Dr. Watson and Damien Atkins as Sherlock Holmes in
The Hound of the Baskervilles. Photo by Emily Cooper.
In the English country estate, the servants and the aristocrats would speak with distinctive and high-toned English accents. There are some exception but the accents of the cast are generally atrocious. Sir Henry may be excused because he lived in Alberta but if you believe that an accent can be lost that easily between Edmonton and Calgary then I can offer you some land in Florida. Somehow I find that failure a major obstacle to creating the appropriate atmosphere for an English mystery.

The play has more than half a dozen scenes and Hall seems to be a great believer in the use of projections. Some of Jamie Nesbitt’s projections are effective but in the end they are also distracting. The entire stage and the wings on each side are plastered with projections. When Holmes goes to the cellar, the descent is shown on a projection and in the end what starts as effective becomes gimmicky overkill. Alan Brodie’s lighting designs are dark and foreboding as you would expect in a murder mystery.

I am not sure that The Hound of the Baskervilles is the best choice for bringing back murder mysteries to The Shaw. Mystery aficionados are bound to love it but the production is carried more by Arthur Conan Doyle than the cast and the creative team.
____________
The Hound of the Baskervilles by Arthur Conan Doyle, adapted for the stage by R. Hamilton Wright and David Pichette, opened on August 11 and will run in repertory until October 27, 2018 at the Festival Theatre, 10 Queen's Parade, Niagara-on-the-Lake, Ontario. www.shawfest.com
Posted by James Karas at 12:20 PM