This year is the 100th anniversary of the end of World War W1. Tim Carroll, the Shaw Festival’s Artistic Director, no doubt wanted to mark the occasion and his production of Bernard Shaw’s O’Flaherty V.C. was a good start. Oh What a Lovely War was all about the Great War with Canadian content.  He seems to have had another idea. How about a production of Shakespeare’s Henry V set in a World War I dugout involving Canadian soldiers?

Seven Canadian soldiers are in the dugout, rifles, gas masks and equipment at hand and they are rehearsing Henry V. Scripts in hand, they seem to be going through an early reading. The Chorus is barely able to read the first line of the opening speech when the actor playing the Archbishop of Canterbury refuses to continue because he does not want the part. 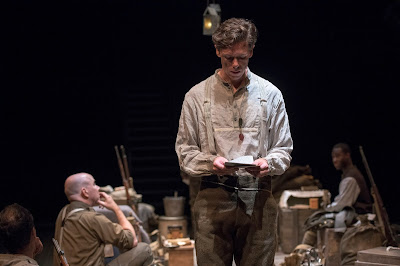 Damien Atkins in Henry V. Photo by David Cooper.
The actors who play the soldiers are professionals but the soldiers who are rehearsing Henry V are amateurs – and they look it. The seven actors perform, if I counted them correctly, some 35 roles. Take the Chorus, for example, he is played by four actors. The rest play several role or more each and you are challenged to keep track of who is playing what when, if you care at all.

The second half of the play takes place in a hospital where six beds are lined up and occupied by the soldiers who have been seriously wounded. We see crutches, head bandages and evidence of other wounds on the soldiers and four nurses who take care of them. They continue rehearsing roles in the play with no particular attention as to whether the characters are men or women. Lines are muffed, we are told acts and scene numbers and the rehearsal goes on.

The amusing scene with Princess Katherine and her attendant Alice, where she is trying to learn English is played twice. In the first round Damien Atkins is Katherine and Kristopher Bowman plays Alice. In the repeat of the scene, Natasha Mumba plays Katherine and Yanna McIntosh is Alice. I may be approximately right and I only recite these details to give you an idea of the mish mash of the production. 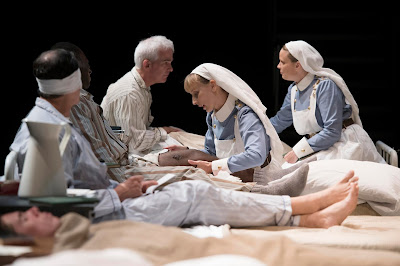 Julia Course and Claire Jullien with Patrick Galligan, Cameron Grant,
Kristopher Bowman and Damien Atkins in Henry V. Photo by David Cooper.
Gray Powell plays Henry V but he is just an ordinary soldier as are all the other men and what is the point of putting on the play when the production has almost nothing to do with Shakespeare’s work? What in the world are we supposed to get out of the travesty of Shakespeare’s play and what are we to make of these “amateurs” doing a run through?

This is the first Shakespeare play that the Shaw Festival has produced and the choice is a complete mystery considering the approach that Carroll has taken. There are some jokes that the soldiers make about lines and actions in the play but they are much funnier for the participants during an actual rehearsal.

No doubt Tim Carroll and his co-director Kevin Bennett envisioned something dramatic in their approach to the play but they did not deliver anything of the kind. A deep disappointment.
_________________
Henry V by William Shakespeare continues in repertory until October 28, 2018 at the Jackie Maxwell Studio Theatre, Niagara-on-the-Lake, Ontario. www.shawfest.com.