The Stratford Festival has made one of its infrequent forays into modern Italian drama with a production of Eduardo De Filippo’s Napoli Milionaria! It is a play about occupied Naples during World War II. The city was first occupied by Mussolini’s ally, Nazi Germany, and then liberated by the Allies after some relentless bombing of the city.

De Filippo wrote Napoli Milionaria! in 1945, the year in which the Germans surrendered to the Allies. It tells the story of the Jovine family and their circle who try to survive the Fascists, the Nazis, the bombing and the poverty. They live in a rundown house on a side street, illustrated beautifully by Designer Julia Fox. 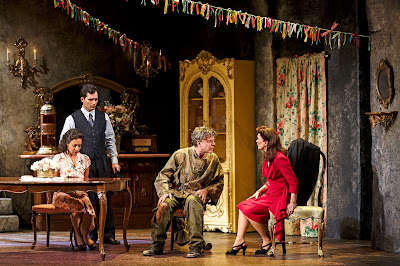 From left: Johnathan Sousa as Amedeo, Shruti Kothari as Maria Rosaria, Tom McCamus as
Gennaro and Brigit Wilson as Amalia in Napoli Milionaria! Photography by David Hou.
Gennaro, the father, is unemployed and his wife Amalia has gone into trading goods on the black market in order to put food on the table for her family. Brigit Wilson as Amalia shows us the descent of Amalia from a fighter for survival into a greedy and merciless woman who abandons morality for money. The old excuse of “everybody is doing it” is stretched to the limit as Amalia acquires money, clothes and almost a lover.

Tom McCamus as Gennaro is the opposite of his wife. He is unemployed but decent, honorable and gentle. He is somewhat garrulous but he also illustrates the importance of understanding, the strength to be just and the moral fiber to forgive and look to tomorrow instead of yesterday. With his tousled hair and his apparent detachment from what is happening, McCamus gives a superbly moving performance.

Shruti Kothari as their daughter Maria and Johnathan Sousa as their son Amedeo take different routes into immorality. Maria and her friends Margherita (Oksana Sirju) and Teresa (Mamie Zwettler) dressed provocatively stay out very late with American soldiers practicing the world’s oldest profession. Amedeo goes into probably the world’s second oldest profession, stealing and in this case it is car tires.

Alexandra Lainfiesta as Assunta is simply hilarious. She is a rather dim but decent girl who goes into unstoppable fits of laughter in a squeaky voice and the audience just loves her.

The play has more than twenty characters as De Filippo tries to give us a cross section of Neapolitan society in wartime. There are people who are decent, indeed noble and there are those who are greedy and simply criminal. 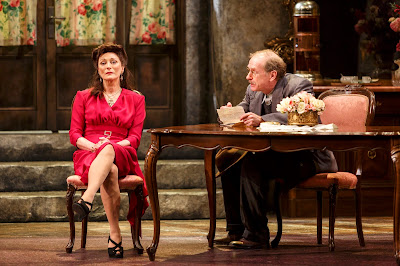 Brigit Wilson as Amalia and Tom Rooney as Riccardo Spasiano in
Napoli Milionaria! Photography by David Hou.
Riccardo (Tom Rooney) is a gentlemen of some means but has fallen on hard times because he is unemployed. Amalia takes advantage of his hardship and grabs his wife’s jewelry and all his property including sheets and towels. He will get his opportunity to take revenge when Amalia’s little girl needs some life-saving medicine and he is the only one that has it.

Brigadier Ciappa (Andre Sills) knows what Amalia and Amedeo are doing. When he visits them the first time, Gennaro pretends he is dead but Ciappa does not fall for the ruse. He could arrest them and destroy Amalia’s black market enterprise.

Gennaro is taken prisoner by the departing German army. When he returns he sees the wealth that Amalia has acquired and slowly learns the truth about what his children and wife are doing. The world has changed but not necessarily for the better. He finds out what his children are up to and senses his wife’s possible infidelity. Her business partner, the dapper Errico (Michael Blake) has made his attraction to her clear and she has responded.

I have deliberately did not disclosed much of the plot because it is worth seeing the play and enjoying it as events unfold. It is a wonderful play, full of humour and humanity, both good and bad.

Antoni Cimolino does superb work in directing it and evoking the laughter, drama and world of civilians during war. He has a fine cast to deliver an excellent evening at the theatre.

De Filippo wrote some forty plays and is considered one of the great Italian playwrights of the twentieth century. I may be mistaken but I think the Stratford Festival has produced only one of his plays, Filumena in 1997.  Cimolino who has Italian roots should visit the drama of his patria more often.
__________________
Napoli Milionaria by Eduardo De Filippo opened on August 17 and will run in repertory until October 27, 2018 at the Avon Theatre, 99 Downie St, Stratford, ON N5A 1X2. www.stratfordfestival.ca