Michele Smith and Dean Gilmour are the dynamic duo who created Theatre Smith-Gilmour in 1980. In some 40 productions since then, they have proven to be ambitious, inventive, enterprising and just plain bloody good. If they have any competition in longevity and creativity, I am not aware of it.

This year they have taken a huge bite – Victor Hugo’s massive Les Misérables - and offered a series of dramatic scenes from the novel. Even though a large swath of the novel is taken up by essays on various subject, the idea of presenting the main plot thread involving the hero Jean Valjean is simply breathtaking. To give you an idea of the size of the novel, I have an old edition that runs to four volumes. 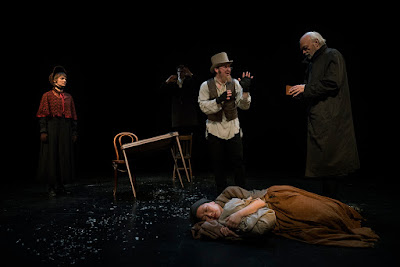 Smith and Gilmour have six actors represent some 29 characters. The action takes place on a bare stage with a few props and some video projections. Much of the action is mimed and the play does achieve some very dramatic moments. But it also contains an inordinate amount of Dickensian melodrama and sentimentality, and numerous coincidences without Dickens’ humour.

The action is launched with Gilmour as Valjean telling us about his arrest and conviction for stealing a loaf of bread from a bakery in order to stave off gnawing hunger. Gilmour does impressive acting and miming of events in Valjean’s life. He is sent to prison for five years to serve in a galley. His sentence is increased to 19 years for his attempts at escape and the story continues.

On his release Valjean is mistreated because he carries the yellow passport of a convict but he finds shelter and food in the house of a bishop. He steals silver from the bishop, is caught and the bishop pretends that he gave the silver to him. We have met generosity and nobility.

We meet the beautiful Fantine (Nina Gilmour) who has an illegitimate child and has an extremely difficult time surviving. She gives her child to the evil Thenardier couple (Daniel Roberts and Diana Tso) who extract money from her. After some melodramatic scenes, she dies and we will have her daughter Cossette (played by Nina Gilmour) for the rest of the play. 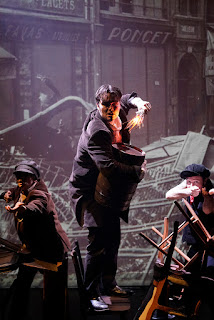 One of the main plot threads is the vengeful pursuit of Valjean by the relentless and merciless Inspector Javert (Mac Fyfe). The other pursuit is by Marius (Benjamin Muir) of Cossette. He is a caricature of the obsessed romantic lover who runs into more obstacles than a steeplechase.

The personal histories are intertwined with national events including war and revolution as Hugo covered a large portion of history and Gilmour and Smith attempt to do justice to the novel. I think they try to chew much more than is possible even in two hours and forty minutes.

Marius’s pursuit of Cossette becomes tiresome because there is overstated ardour without humour. Scenes that may be dramatic become simply sentimental, almost mawkish, and in the end your interest in Valjean’s fate is seriously diminished. When Valjean is given another chance to exterminate the creepy Inspector Javert and he decides to be merciful, I felt like screaming “Blow the bastard’s head off.”

The six actors’ ability to take on numerous roles is admirable and I don’t want to take anything away Michele Smith’s deft directing and the couple’s brave attempt to give us their stage presentation of a small part of a massive novel.  In the end it is a noble attempt at an impossible task that has some redeeming features but also some big potholes.
___