La Comédie-Française has joined other theatre companies in transmitting performances either live or recorded to cinemas around the world. A pre-recorded performance of Molière’s Les Fourberies de Scapin translated as Scapin the Schemer was shown in Toronto on March 14, 2018.

Scapin is a farce and this production seemed to have many of the virtues to provide a laugh-filled couple of hours in the theatre. Unfortunately the performance falls flat evoking only nominal laughter in the cinema as well as the audience in the Salle Richelieu in Paris. 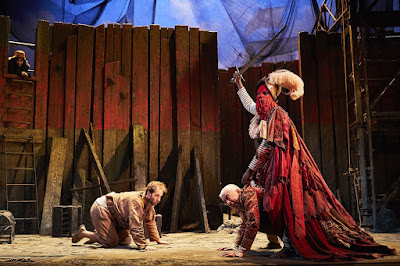 First, the story. We are in Naples and Argante (Gilles David) and Géronte (Didier Sandre) are away on business but they are planning the marriages of their sons Octave and Léandre. In the meantime, Octave has fallen in love with the lovely but poor Hyacinthe and married her. Léandre has fallen madly in love with the gypsy Zerbinette. Both men have committed filial disobedience of the worst kind. They problem can only be solved by Léandre’s valet Scapin who is a trickster, a schemer, a liar and a man of infinite talents.

The plot is straight from New Comedy and we know that all will be resolved in a couple of hours and the young lovers will live happily ever after. The play has an interesting difference. In this case the parents are not obstacles to their sons’ choice of brides. They are simply unaware that Hyacinthe is in fact Géronte’s daughter and Zerbinette is Argante’s daughter and the fathers’ choices for their sons.

Scapin, played by Benjamin Lavernhe dominates the play. Lavernhe seems like a highly talented actor who can do physical and verbal comedy. Director Denis Podalydès with Lavernhe and the rest of the cast has decided that there is no such thing as too much of a good thing. There is and Podalydès milks many scenes for laughs long after they have ceased being funny.

Scapin extracts money from both fathers in order to fulfill the needs of their sons. He manages to put Géronte in sack and beat him quite severely. The scene goes on forever as Lavernhe gets a youngster from the audience to take a few whacks at Géronte. That does evoke laughter as does his invitation to the audience to chant “Géronte” in unison. It is going over the top for a laugh which should have been generated by the performance without audience involvement. 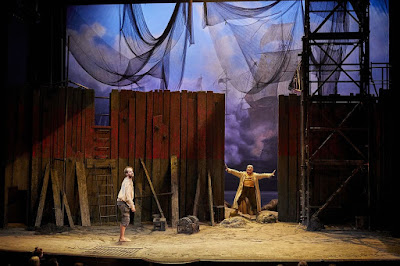 Sandre as Géronte and David as Argante do yeomen work as classic old and stingy fathers who are used, abused and duped by Scapin.   Gaël Kamilindi as Léandre and Julien Frison as Octave are typical young lovers, long on passion, promises and ardour.

Adeline d’Hemy as Zerbinette pretends to be a wild gypsy and she gyrates wildly almost to the point of breathlessness. Pauline Clément as Hyacinthe does a fine job as a woman who knows what she wants.

Podalydès and designer Éric Ruf have set the production in the port of Naples. We see some sails in the background but the foreground looks like an abandoned storage depot with scaffolding on the right and broken boards.

In the end, we got a production that had many of the right ingredients but it misfired. The program tells us that Scapin has been performed more than 1500 times by the Comédie-Française but there had not been a new production for twenty years. Denis Podalydès was invited to do a new production. The result is a disappointment.
____________