Canada has produced many highly talented and accomplished theatre people but I am not sure how many of them would qualify to be described as “great.” If a poll were taken, I have no doubt that many Canadians would name actors whom they admire and call them great but can we find some general agreement?

Keith Garebian, who knows a great deal about theatre in Canada, would not hesitate to name William Hut as a great Canadian actor. He is right.

Garebian has dedicated many years researching and writing about Hutt. He published an incomplete and unsatisfactory biography of Hutt in 1988 (William Hutt: A Theatre Portrait) and has now updated and completed that book as William Hutt: Soldier, Actor. 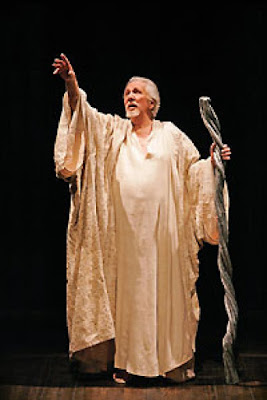 William Hutt as Prospero
It is a major contribution to the history of Canadian theatre and a superb portrait of Hutt, warts and all, as a performer, artist and human being. He leaves no stone unturned and one is continually impressed by the breadth and depth of his research.

After playing at Hart House as an amateur after the war, Garebian writes, Hutt began his professional career in 1948. He acted for ten weeks in Bracebridge in an auditorium above the fire hall, was left with no money and had to become a bricklayer to make ends meet. After that he cleaned rugs, chesterfields and lampshades for Cleanol.

More acting jobs followed and he was finally invited to join the inaugural season of the Stratford Shakespeare Festival in 1953 in a town where actors were considered “a race of giddy whore-mongers with painted faces.”

Touring around most of the United Sates and across Canada was not unusual in the good old days of the 1950’s and they make for fascinating reading. Performing in small towns (Moosonee, Cochrane and worse) in jaw-dropping venues with hilarious mishaps makes for fascinating and enjoyable reading not just as events in Hutt’s life but as part of the development of theatre in Canada.

As such, Garebian covers a large swath of theatre history in the second half of the 20th century in Ontario as it is connected to Hutt including numerous visits to other parts of Canada, England and the United States.

Names of actors, directors and productions cascade before us. Some are still familiar, many are forgotten but sic transit gloria mundi, as some still say.

Hutt’s complex personal life receives well-deserved coverage. He was bisexual at a time when homosexuality was not merely disapproved of but was in fact illegal. Many women found him attractive and he had some relations with them but I am not sure if those relations were consummated. It is known that he was ready to marry the young and beautiful Louise Marleau in 1968 but he was more pursued than pursuing in the affair. He placed a small package under the Christmas tree, Garebian tells us, probably and engagement ring but Marleau did not show up. She boarded a private train headed for Ottawa for her affair with Prime Minister Pierre Trudeau. 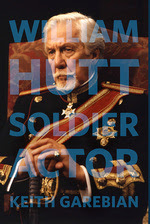 He was decent, arrogant, jealous, generous, in other words he had many virtues as well as vices. His loves and emotional upheavals, heavy drinking are all covered but the most important part of an actor’s life is acting.
Garebian is astutely and keenly interested in Hutt’s development as an actor. His innate talent was developed almost haphazardly. He did not attend a theatre training school (there was none in Canada) but had to learn from directors. He learned his acting and directing skills from masters of the craft.

As late as 1968 when he was 48 years old, Hutt was still trying to establish himself as a leader of his profession. He had built his career on secondary roles, Garebian tells us, sometimes in the shadow of Christopher Plummer who had shot to the front ranks.

From becoming proficient at comedy such as Noel Coward roles to finding his inner self or the inner self of the characters that he played was a long journey of discovery for Hutt that Garebian covers meticulously.

As his reputation and success grew, Hutt adopted the arrogant persona of a star on occasion but he still felt that he had not reached the front rank.

He reached the top and performed in a staggering number of roles. He was without a doubt the best Shakespearean actor in Canada and his attention to detail and the inner self of Shakespeare’s characters from King Lear to Fest to Prospero is astounding.

The book has a large number of photographs most of them in colour. Garebian helpfully includes a Theatre Chronology listing Hutt’s performances from the summer of 1948 with the Mark Shawn Players to his last performance on stage as Prospero in The Tempest in 2005 and as Charles Kingman in Slings and Arrows for television in 2006. He died in June 2007. The inscription on his monument reads Soldier – Actor.