What a Young Wife Ought to Know, the title of Hannah Moscovitch’s play, is not posed as a question but as a statement or perhaps a wish. If the question were what a young working class wife knew about sex, love, pregnancy and birth control about one hundred years ago, the answer is simple: almost nothing.

Moscovitch tells the story of Sophie (Lisa Repo-Martell), her husband Johnnie (David Patrick Flemming) and her sister Alma (Rebecca Parent) who live in the back water city of Ottawa. They have committed the crime of being born poor and therefore uneducated and therefore condemned to work in jobs that frequently do not pay even subsistence wages. 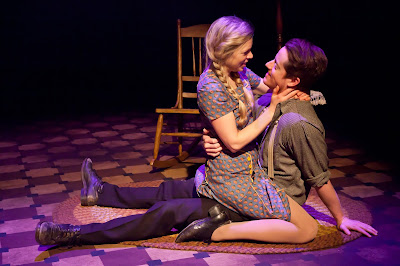 Lisa Repo-Martell and David Patrick Flemming, Photo: Timothy Richard
Sophie addresses the audience directly, husbands and wives separately, and we join her in her life with her sister and her courtship, marriage and family with Johnny. Her innocence has a certain pathetic charm when she kisses a dying young man on the cheek and fears that she may have become pregnant. She is attracted to the handsome Johnny and haltingly, even comically they consummate their marriage. Consummate would be a foreign word to her, so let’s say they have sex.

Poverty and ignorance do not abate their passion but a society that espouses ignorance and suppression of all knowledge about sex, birth control or abortion and seems to keep it away completely from the working class as if it were the bubonic plague is hardly to be sought. Not to mention that it was illegal to provide birth control information in Canada at that time and for many decades afterwards.

Children arrive, alive and stillborn, the Irish immigrant Johnny loses his job as a stable worker for a hotel, more pregnancies, no information about birth control, lack of basic necessities such as food arrive. Isn’t life and love just wonderful?

The spirit of Alma never leaves Sophie. Alma was gutsy, smarter and fearless. She became pregnant and put an end to her pregnancy - and her life. Her ghost visits Sophie as if it were a reminder of the road not taken or the road available to Sophie. It is frightful proposition.

Moscovitch tells us in the program that the play is based partly on the book of letters received by British birth control advocate Dr. Marie Stopes (Dear Dr. Stopes: Sex in the 1920s). One hundred years later it is hard to imagine the conditions that prevailed then unless one glances at the life of the poor in most countries of the world not least of which are parts of some southern states of what has finally become Great America Again. 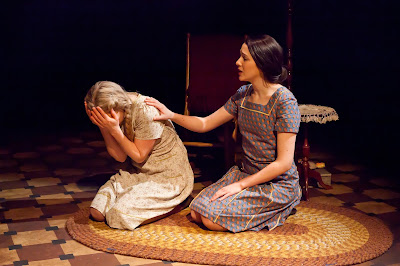 Lisa Repo-Martell and Rebecca Parent. Photo: Timothy Richard
From commentator to pathetic, ignorant and tragic woman, wife and mother Repo-Martell does a fine job and is well-contrasted with the self-assured Alma of Rebecca Parent. Flemming as the handsome, macho, ignorant man who faces social challenges beyond his comprehension and ability to control looks for means of survival and can find none.

In the end there is a resolution as Sophie emulates her sister. I will not spoil the plot for you.
The play makes its points but it does not flow particularly smoothly. The plot shows structural weaknesses as it lunges from one point to the next.

The production is done on a bare stage designed by Andrew Cull with a few props such as a table. The rest of the atmosphere is handled by the lighting design of Leigh Ann Vardy.

What a Young Wife Ought to Know was first produced in Halifax in January 2015 by the Halifax-based 2b Theatre Company. The production is directed ably by Christian Barry, the Artistic Co-Director of 2b Theatre Company. It is theatre to see.
________________
What a Young Wife Ought to Know by Hannah Moscovitch continues until April 7, 2018 at the Streetcar Crowsnest Theatre, 345 Carlaw Avenue, Toronto, Ontario M4M 2T1. http://crowstheatre.com/ or http://www.2btheatre.com/