The monument in the title of Colleen Wagner’s play refers to a memorial for women who have been tortured, raped and killed in war. The play deals with that unimaginable and absolute evil and its success can only be limited by the impossibility of any form of art to express the inexpressible.

The play opens with a young man named Stetko (Augusto Bitter) describing how he raped a young girl. He is bragging as much as he is describing it and he accompanies his tale with a demonic laugh. He has raped and killed 23 women and he is refusing to disclose where their bodies are buried. 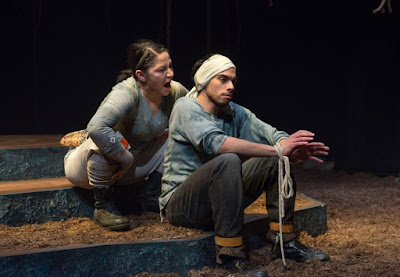 Tamara Podemski and Augusto Bitter in The Monument. Photo: Joseph Michael
Stetko is convicted, his hands are tied behind his back and he is awaiting execution. Mejra (Tamara Podemski) appears. She takes on many guises. She is his executioner, confessor, avenger and a seeker of an explanation about the actions of this monster. In the ninety minutes that the play lasts, Stetko the monster will present other views of his actions. He had to do it because others were doing it; things like that happen in war; there is no justice in war.

His initial denial of any knowledge of what he had done wanes and he recollects very well the horrific acts that he committed. Bitter gives a superb performance as the perpetrator of absolute evil who is transformed or perhaps finds his humanity and asks for forgiveness.

Mejra is a victim of the tactic of rape as a weapon of war and she is furious and vengeful but at the same time she is looking for information, an explanation, something to make her understand such acts of evil. Some or perhaps all of these things. Podemski in her brilliant and powerful performance goes through several phases and becomes a torturer herself in her attempts to break down Stetko.

My initial reaction was that the play should have finished in a couple of minutes with Mejra tying one of the ropes hanging from the ceiling around Stetko’s neck and raising him from the ground slowly, very slowly, as far as she could and then letting him drop to his well-deserved death in indescribable torment.

The Monument was written in 1995 and its context seems to be the rape of mostly Muslim women by soldiers during the breakup of Yugoslavia. Director Jani Lauzon tells us in a program note that she re-imagined the play through the Canadian issue and inquiry into Murdered and Missing Indigenous Women and Girls. This adds confusion rather than clarity. There is no war in Canada and references to soldiers raping and murdering indigenous women and girls as a tactic in ethnic cleansing are misleading. The play stands on its own well enough and the audience can relate to whatever part of the world it may be aware of where there is internecine war and rape is used as a strategic tactic.

The red dresses hanging on the stage and the ill-conceived attempt to give the play a Canadian context do not detract from the power of the play but they do not add anything either.

Wagner is groping for shreds of humanity and the idea of reaching the heart of a monster and making him ask for forgiveness. A noble sentiment that I find unconvincing. You can find or make Stetkos fairly easily in any war. Just give the orders, directly or indirectly, and many young men will succumb to rape and murder for many reasons from following the example of others to being brutalized by war and doing acts that they would find otherwise unthinkable.

The ultimate monsters are people who never kill, never fire a gun and never rape anyone. They are the political and military leaders who decide on strategy and tactics and make soldiers become monsters. Can we send a Mejra to see, say, Radovan Karadžić or Ratko Mladic or any number of other genocidal beasts and determine if there is a grain of humanity in them to make them understand their actions.

This is a riveting play that leaves you furious at our inhumanity and more so at the lack of any solution despite Wagner’s fervent hopes.
_____