It is a question that Sorrel asks herself in Hanna Moscovitch’s Bunny, now playing at the Tarragon Theatre.

Sorrel, the main character in the play, is not a freak but she is a very interesting and confused person. She lives in two apparently disparate polarities. She is a brilliant student of 19th century fiction (George Eliot, Jane Austen) a world of stifled emotions and the search for a husband. On the other hand, there is Sorrel’s sexual appetite which some people may think borders on the promiscuous. Is the title of the play and her nickname a reference to a cottontail that fornicates without restraint?

Sorrel is the daughter of professors in a small-town university who read Betty Friedan and Das Kapital. But she does not fit in with the high school crowd and she finds a sort of solution by kissing students (oral sex) at first and the real thing after that. That is not exactly a solution to her identity problem. 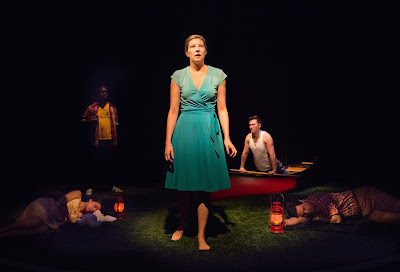 Maev Beaty and ensemble. Photo by Cylla von Tiedemann
She attends university where she is a brilliant student and her sexual encounters expand by having sex with one of her professors and marrying her friend Maggie’s brother. None of the relationships is satisfactory because Sorrel cannot make emotional contact with any of them and especially Maggie.

Sorrel is the narrator of her life story as she moves from one relationship to the next often commenting during the encounter with one of her lovers. In other words she is an actor and a chorus in her life story.

Maev Beaty as Sorrel dominates the play and the rest of the characters become satellites in her life. Beaty gestures with her hands, twists her body and modulates her voice to suggest Sorrel’s uncertainty about herself and her world. She produces a good deal of laughter as she enacts the life of Sorrel’s worlds of literature and sex as she tries to find herself. We move from high school to university to Sorrel becoming a professor of 19th century literature with very little development that I could discern in her character. She cannot even express love for Maggie who is a true friend of hers until the very end of the play. A superb performance by Beaty.

I have no complaints about the rest of the cast. Rachel Cairns plays a sympathetic Maggie. Matthew Edison plays Maggie’s straight-laced brother, the politician Carol and is one of Sorrels’ lovers. Cyrus Lane is the married Professor who avoids detection by his wife in his extramarital trysts by going cheap motels. Tony Ofori is another of Sorrel’s partners Justin and Jess LeVercombe is Angel, yet another conquest. 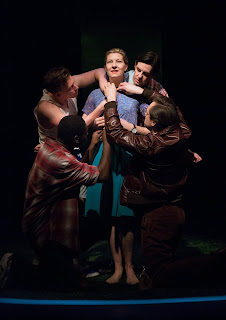 Maev Beaty and ensemble. Photo by Cylla von Tiedemann
The production moves smoothly from one episode to the next but at times a bit too quickly. That is not the fault of Director Sarah Garton Stanley. Bunny is not one of Moscovitch’s best plays and with its episodic structure, and continuous commentary it smacks of a documentary as much as a dramatic study of character.

Moscovitch has more than a dozen plays to her credit and at almost 40, the best description of her may be that of a young veteran of the theatre.

I enjoyed Beaty’s performance but I left the theatre wanting more.
______