The Young Vic production of Tennessee Williams’ Cat On A Hot Tin Roof has reached us in the movies houses. Director Benedict Andrews delivers his idiosyncratic view of the play with a number of stellar performances.

Cat deals with the dysfunctional relationships of the family of Big Daddy, a wealthy plantation owner in Mississippi. His son Brick is an alcoholic who stays in his bedroom with his beautiful wife Maggie whom he hates.

Big Daddy hates his older son Goober and his wife. 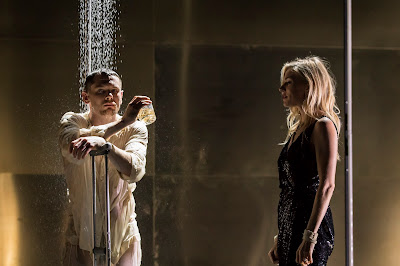 Much of the first act is virtually a monologue by Maggie in a bravura performance by Sienna Miller. She exudes sexuality and unfulfilled desire as Brick expresses his scorn. He tried jumping hurdles in the middle of the night and injured his foot and now he hobbles around on a crutch as he drinks without a break. Brick was a football hero in college and had a friend named Skipper. The idea of homosexuality hangs in the air but Brick tells us that theirs was a close friendship that is so uncommon as to be almost unknown. Maggie thought it was homoerotic and she tried to put an end to it so she can have her husband Brick back. It did not work and Skip committed suicide.

Brick is wracked with guilt about his friend’s death and feels accused of being gay. He states that the friendship was pure and not sexual. Is he wracked with guilt because Skip committed suicide? Does he blame Maggie? Why is he a broken man?

It is Big Daddy’s 65th birthday and he is happy because he has been informed that he does not have cancer.

His revolting older son Gooper (Brian Gleeson) and his monstrous children are trying to curry favour with Big Daddy in order to gain control of the plantation.

Sienna Miller’s Maggie is a strong, wily, smart and magnetic woman. She tries everything to break through Brick’s shell of drunkenness. She crawls, she undresses in front of Brick until she finally manages to come out triumphant. An outstanding performance.

Jack O’Connell as Brick has powerful confrontations with Maggie and Big Daddy where the veneers of guilt and his soul are stripped away. He is stripped naked both physically and psychologically during the production. Brick spends an inordinate amount of time under the shower as if seeking to wash away his guilt.

Colm Meaney plays Big Daddy, a rich, powerful, foul-mouthed, self-made man who hates his wife but believes that he has received a medical reprieve form cancer. You need an exceptionally powerful actor for the role to convey the power of Big Daddy. Meaney falls just short of having the vocal and emotional capacity to represent Big Daddy. 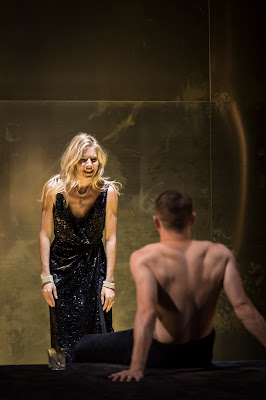 Sienna Miller and Jock O'Connell. Photo: Johan Persson
Andrews clothes Mae (Hayley Squires), Gooper’s loathsome and baby producing machine of a wife, with a very short dress with exposed chest. Big Mama (Lisa Palfrey) is similarly attired and they could be hookers on High Street albeit with expensive clothes. Mae is supposed to be pregnant and there seems no reason to make Big Mama trying to be sexually alluring.

The set by Designer Magda Willi consists of a large bed with dark brown sheets and pillows, a makeup table and bottles of liquor on the floor with a large plastic bag of ice. There is also a shower in the middle of this which Brick, as I said, uses often and for a long time. They are all placed on a raised platform covered with dark brown carpet. The back is a blank wall with a frame of lights.

Andrews updates the play to the present with Big Mama having a cell phone stuck down the front of her dress. I don’t think this adds anything to the production.

The conflict between Brick and Maggie and the confrontation between Big Daddy and Brick are some of the most dramatic scenes in modern drama. The production does justice to both and to the great play making for a great night at the theatre even if it is in a movie house.
__________
Cat On A Hot Tin Roof  by Tennessee Williams in a production by the Young Vic was shown on February 25, 2018 at the Cineplex Cinemas, Scarborough Town Centre, 300 Borough Drive, Scarborough and other theatres across Canada. For more information: www.cineplex.com/events