Verdi’s Duke of Mantua and his courtiers have been found in all kinds of places. They have been seen in Las Vegas, a circus, with the Mafia in Little Italy and Trump Tower. Director Christopher Alden has placed them in a rather unlikely setting of a staid English gentlemen’s club. We have the rich walnut panelling, the leather chairs and well-dressed gentlemen perusing newspapers.

In keeping with our stereotypical view of the English, this is a stiff-upper-lip crowd who eschew much display of emotion and even much physical movement. Eye contact is assiduously avoided and communication across the room is encouraged. The courtiers seem to stay in their club around the clock the way I imagine Penelope’s suitors hung around Odysseus’s palace for years without ever going to their houses. 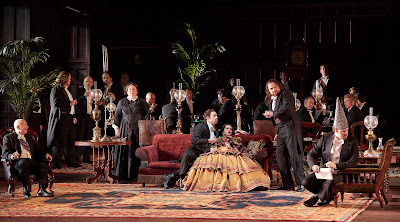 A scene from the Canadian Opera Company’s production of Rigoletto, 2018, photo: Michael Cooper
With minor exceptions, the entire action takes place in the club. That, of course, does not make sense but Alden, as far as I can tell, has no intention of giving us a sequential or logical telling of the plot. This Rigoletto is, I think, the title character’s nightmare or his daughter Gilda’s dream or perhaps both.

During the overture, we see Rigoletto (baritone Roland Wood) seated in a leather chair to our right sleeping uneasily. Pay attention to the chair because it will be there for the rest of the production. A larger-than-life painting of a woman dominates the stage and we learn that it is of Gilda (Anna Christy) and it is tended by her servant Giovanna (Megan Latham).

Much of what happens is unrealistic, illogical, and abstract. But all of that may be consistent with the internal logic of a dream or a nightmare. The portrait of Gilda in the club appears ripped after her abduction. When Gild is being abducted and Rigoletto is told by the kidnapping courtiers that they are after Ceprano’s wife, Ceprano’s wife appears. When the aggrieved Monterone (a powerful Robert Pomakov) appears to complain about the defilement of his daughter, a woman in a nightgown appears. No doubt, she is his abused daughter.

What struck me more was the scene after Gilda’s abduction. We hear a briefly humanized Duke grieve about her loss and expressing his love of her and his desire to comfort her. Gilda appears on a couch and the Duke mounts her. The courtiers surround the couch and Rigoletto appears begging them to tell him where his daughter is. During this highly affecting scene, the Duke and Gilda are hidden from view and he is defiling her. When the courtiers move away we see a distraught Gilda and no Duke.

Sparafucile (the fine-voiced bass Goderdzi Janelidze) is a well-dressed assassin with a briefcase who works out of the club while the courtiers are reading their papers. He is indifferent to his barber and does take his shoes off when he is supposed to be in his run-down murder work-shop but don’t look for him on some badly lit street. This is more of the internal logic of a dream, I suppose. 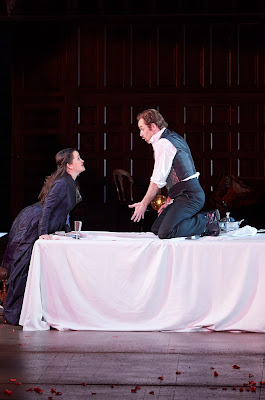 Anna Christy as Gilda and Stephen Costello as the Duke of Mantua.
Photo: Michael Cooper
The singing is of uneven quality. Wood sings consistently well but he is not allowed to or is simply unable to bring out the great pathos and drama inherent in Rigoletto’s situation. He never gets close to Gilda and even in the final scene when he realizes that she has been murdered it takes him a long time to get near her and when he does take her in his arms it is perfunctorily. When he realizes that she is dead there should not be a dry eye in the house. In the end Gilda walks away and I was looking for a ray of light to indicate apotheosis but it did not materialize.

Tenor Stephen Costello has his moments when he is allowed to let go. He sings “Questa o quella” sitting down but he is allowed some swaggering in “La donna e mobile.” Maybe he felt he was singing with his hands tied behind his back in the bizarre interpretation but he was not totally satisfactory.

Soprano Anna Christy has a sweet voice but it is simply not big enough for The Four Seasons. Her delicate tremolo sounded fine in “Caro nome” but I felt like reaching to turn up the volume.

As I said, Rigoletto has been set in numerous locales and some are more suitable than others. But all of them need some exuberance, some emotional depth that expresses the lechery and depravity of the court as well that tragedy of love and vengeance. An English gentlemen’s club be it in a dream or a nightmare is hardly the place for that.
______________