Godot has waited for some forty years for a production by the National Theatre of Northern Greece. The last time the company staged Samuel Beckett’s masterpiece was in 1977 which followed their first performance of the play in 1965. Three productions in over fifty years do not bespeak a popular piece but one is always grateful.

Yannis Anastasakis directs the current production at the Vassiliko Theatre in Thessaloniki on a set designed by Kenny MacLennan. The aggressive lighting is designed by Vasilis Papakonstantinou and movement is by Dimitris Sotiriou.

Giorgos Kafkas as Vladimir and Konstantinos Hatzisavas as Estragon are relatively young tramps who look like they can take care of themselves. They turn in fine performances. Kafkas has a clipped way of speaking that he did not control at times and spoke more quickly than I thought appropriate for a tramp who has very little to do but wait. 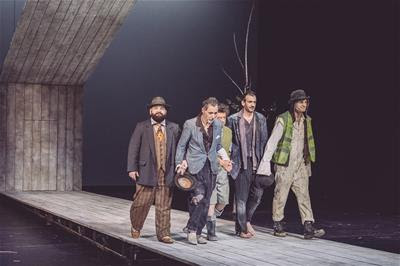 Hatzisavas, a slender young man, did a fine job as the frequently beaten up Estragon. His ambition seems to be to hang himself and put an end to his life but it is not easy to find the means. Panagiotis Papaioannou gave us a brutal, stentorian and a freaky Pozzo. He went from the nasty martinet to the begging, blind Pozzo and was quite exceptional.

The role of the pathetic Lucky was adroitly played by Thanasis Raftopoulos. The role has to be carefully choreographed for the physical abuse meted out on Lucky and the job was done superbly.

Foulis Boudouroglou was simply miscast as the Boy. The adult actor tried bravely to convince us that he is just a boy but despite his change of vocal intonations and bodily movements to convey that he is a youngster, I felt that he was a miscast adult for the role.

MacLennan’s set features a white platform that extends from the back of the stage on to the fifth row of seats in the orchestra. The platform goes up vertically at the back of the stage and curves forward towards the audience. Much of the action takes place on the platform. The issue I have with the platform is that it looks like a road connecting the audience to the stage and beyond. As such the road gives a focus to the action and may be seen as a way out for Vladimir and Estragon. Can they just follow the road? My take on the play is that the tramps live in the middle of nowhere where the only visible thing is a dead tree. Strangers abuse and beat up Estragon and Pozzo enters but I don’t think there is such a defining feature as a road. They always find something to give them the impression that they exist, they tell us, and I suggest that a road is concrete evidence of something that does not belong in the play.

Waiting for Godot provides considerable scope for humour and some directors take full advantage of it. Black humour in a play of the absurd can be quite intriguing. Anastasakis has opted for a straight reading of the play with only a few giggles from the audience and a full laugh when the word critic is mentioned.

When Pozzo is about to enter, the audience is struck with blinding headlights. He is not driving a vehicle and has only Lucky on a rope. I could not figure out Papakonstantinou’s use of the headlights unless they are meant to be connected with the road suggested by the platform.

Anastasakis’s direction and conception of the play is quite intriguing and fascinating regardless if you agree with some of his choices. Waiting for Godot is a rich and endlessly fascinating and confusing play. This production is decidedly worth seeing.
____________